Today, we're joining in the WOMEN'S HISTORY MONTH celebration with a great new release via Penguin Young Readers.  It's a work of Children's Non-Fiction presented in a somewhat Picture Book format that highlights the accomplishments and triumphs of some of America's most noted female voices over the past 100 some odd years...otherwise known as the First Ladies.  Ready, set, edutainment is on deck... 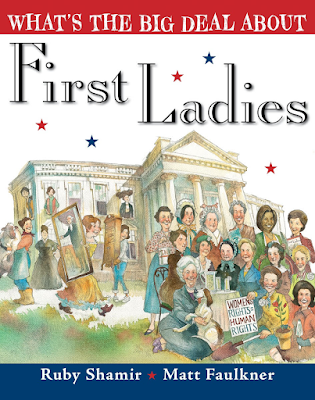 Following in the footsteps of So You Want to Be President?, this first book in a new series features fun, kid-friendly facts about America's First Ladies and shows young readers just why they're such a big deal.
Did you know that Mary Todd Lincoln played a huge role in fighting to end slavery? Or that Edith Wilson decoded secret messages from our allies during World War I? Or that Michelle Obama has led a nationwide initiative to promote healthy lifestyles for children?

Or how about fun facts: Did you know that Grace Coolidge had a pet raccoon? Or that Dolley Madison loved oyster ice cream? (And would later have a brand of ice cream named after her!)

In addition to being hostesses, ambassadors, activists, educators, historians and role-models, each first lady put her own stamp on the White House and her husband's presidency. Filled with fun, kid-friendly facts that bring each First Lady to life on the page, this picture book written by a member of a former first lady's staff, shows us just how much our nation's first ladies have accomplished from Martha Washington to Michelle Obama.

Alrighty then, so that's that.
The end of the review.
What's that?
I didn't actually review it?
Yes, I know, but you see, this was an "anything-but-just-a-review" tour, so the post gets to turn a bit creative, reflective, or otherwise non-review-y.  Are you ready?  Here goes!

So, we were each assigned a first lady to highlight, and my first choice was a no brainer...

Why?
Well, back in high school, I did a pretty extensive report that counted for both my English final and History final on her husband, Mr. Abraham Lincoln.  Yes, I was THAT girl.  I was the one tasked with uncovering the life and times of one of histories most memorable leaders and by golly, it was time to learn more about the little missus!  But, my fair readers, don't think she stood by idly as Abe got all honest to the folks of the nation and created a ruckus that would wound and heal a nation divided.  No siree!  She was right there in the fray!

*She hated slavery with a passion as fiery and fierce as her husband, partnering with him to put an end to the barbaric practice.

*She opened the White House to thousands of guests believing in welcoming the "every day" man and woman, not shutting them out behind walls of power.  Sadly, she paid for her generosity at times...loosing the very buttons off her shirt, err...dress to some less than honest souls, but she was not to be deterred.

*Continuing with the open door policy of sorts, she was the first first lady to welcome African Americans to the White House, a practice that was highly controversial back in her day and times.

All of these reasons and more are why I highly respect this particular first lady, but there are many more to learn about and from within the pages of this nifty Picture Book.  I highly recommend it for all ages as a great source of edutainment, and inspiration for the next female leaders among us.

Special thanks to Chelsea at Penguin Young Readers for the chance to participate in this celebratory experience and shine a light on this title.  (THANKS!)  For more information on this release, the author, the illustrator, or the publisher, feel free to click through the links provided above.  To join in the fun at the other sites participating in this tour, take a click through the blogosphere via the links below.  Some are still plotting their posts, so bare with the question marks...  ^-^

Now, the SECOND HALF of what you've all been waiting for...

That's right!
Now's YOUR CHANCE to grab ONE OF TEN HARDBACK COPIES of this very title to add to your collection, give to your local school for their library, or simply share it with the little women in your life so they have some idea of just how far they can go.  All you have to do is CLICK HERE to access the Rafflecopter, fill out the info, and you're in it to win it.

Thanks for this fascinating feature. Mary Todd Lincoln's contribution was great. Thanks for the giveaway. saubleb(at)gmail(dot)com

I really like this giveaway! Thanks for the chance to win it! lindaherold999(at)gmail(dot)com