HI there!
Welcome back to the Friday edition of Satisfaction for Insatiable Readers.

For those of you who celebrate it, HAPPY SAINT PATRICK'S DAY!  May the day bring you luck, a chance to partake of some delicious Irish fare, and a severe lack of pinches because I know we ALL remembered to wear SOMETHING green...right?  *double checks outfit*  Anywho, let's get on with the show!

Today, we're playing host to a Virtual Author Book Tour starring a work of Historical Fiction via Mill City Press. It's a tale that will whisk you away to the old frontier as the western half of these United States was still being settled while ensconcing you in the lives of several memorable characters.  So, if you'll circle the wagons and prepare to depart, today's book of choice and blog tour guest is on deck... About the book...
IN THIS EPIC TALE of love, loss, and redemption, the year is 1861, a time when women are expected to be married by a certain age. At 26, spinster Emily Wainwright has no reason to believe her sheltered life will ever change—until the charming Samuel Todd unexpectedly crosses her path. Samuel yearns to homestead and start a family in Oregon, but he first needs to find a wife. Blinded by Samuel’s good looks, and grasping at her final chance to have a husband and children, Emily accepts his marriage proposal. However, Samuel is not the man she thought he was, and her marriage becomes a cold, cruel prison, offering her no solace amidst the hardships of farm life. When Samuel dies and a second chance at love and happiness arrives in the form of farmhand Cole Walker, Emily must overcome her bitter past—or risk losing Cole and the life she has always dreamed of having.

This is the story of Emily Wainwright's climb from small town spinster of reputable name to married pioneer woman forging a life with her own two hands by her husband's side.  Sounds historically steeped with possibilities for moments of the heart and personal triumphs, right?  Oh, if only it were that rosy of a tale...

I was looking back at my GoodReads updates as I read this book and noticed a distinct direction to my thoughts along the way regarding both the story and the characters. Allow me to shed some light on those ruminations.  Emily was a sweetheart through and through, though a might stubborn which is what lands her in the situation as it is....but it is certainly not her fault.  While yes, she should have listened to her elders, and perhaps taken more heed of the town gossip about her instant suitor, she was blinded by love and the chance to start a life of her own.  Little did she know what hid behind the handsome facade, for if she did, the entire course of her life would have changed in an instant.  Looking back, despite the pain, sorrow, and abuse, I'm not so certain she would have changed anything for it made her the person she was, landed her in the life she now led, and allowed her to build that extended family, both blood and non, that she so long desired.  Straight through the final pages, she remains a stunning character with so much more strength than she even knows, both physical, mental, and of the heart.  Now for the a**hat....

The jerk du jour goes by the name of Samuel Todd (kin to Mary Todd Lincoln, but FAR FAR FAR from the apple tree!) and I kid you not, that moniker I bestowed on him is the NICEST thing I could say.  Those updates I mentioned looking back on?  Pretty much EVERY ONE included a note of how much I would love to climb through the pages and show him what's for.  I so wish that Emily would have taken Andrew up on his not-so-veiled offer to "help" with the situation when it was at its worst because honestly, he deserved SO MUCH WORSE.  He was one of the worst kinds of humans imaginable, and not simply a product of his day and age.  Samuel was born with a silver spoon in his mouth but wanted nothing to do with anything that was a sure bet, or on the up and up.  He loved nothing more than his gambling, drinking, and ladies of the night...and yet the final sting of his family disowning him, struck a cord somewhere within.  I won't say his heart because I'm not convinced he has one.  Anywho, it is he who misguides our fair lead, he who tries to break her spirit, he who brings all the horrors life can offer to her feet.  He deserved no much worse than he got, and certainly was not worthy of Miss Emily, but at least fate sees fit to find him in the end. 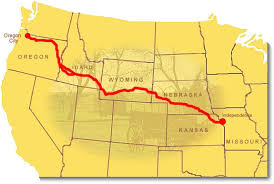 In the end, it was quite a remarkable journey to take thanks to the wonderful talent of this author. I'm as worn out as if I actually traversed the Oregon Trail with Miss Emily, myself, but in the best way possible. Her life and times were not ideal, nay many would call them even less than that, but she made them her own, and did more than simply survive.  I couldn't have cared more for the extensive cast of characters than if they were relations of my own.  Delia, Vina, Andrew, Joseph, Jack, Cole, Nettie....so many souls created to fill Miss Emily's world with much needed color and kindness that I won't soon forget.  Whether you're a fan of Historical Fiction or not, take a chance on this ode to the unbreakable nature of the human spirit that reminds us that even through the worst of times, love can conquer all.


“All of Righettini’s characters are well-rounded, in particular Emily herself, whose personal growth throughout the novel is richly detailed and memorable.”-Historical Novel Society

“This novel is about second chances and the courage needed to take them. The most compelling aspects of The Blue Hour are not the vivid, expansive descriptions of life on the vast (and seemingly never-ending) Oregon Trail or the well-drawn characters who dance (and often trudge) between hardship and hope. Instead, the brightest lights burst forth from nuanced moments tucked throughout the story. Read this book if you want to immerse yourself in the wilds of western America in the 1860s or get lost in the even denser wilderness of love and loss. Maybe this recommendation needs to be simplified even further – read this book. It’s exhilarating to root for a character who is trying to navigate uncharted territory and make the greatest discovery of all.”-Underground Book Reviews

“The Blue Hour is one of the finest historical novels I've ever read. You will love the author's writing and the detailed historical references. The characters are vividly portrayed, and I felt as if I knew them well. Long after I'd finished reading, I still thought about the story. It's part adventure, part love story, and part survival. Highly recommended.”-Ann Creel, Author

Vicki Righettini is an award-winning, nationally produced playwright, and her recently-published historical novel, The Blue Hour, was a badge winner and Pitch Perfect Pick at Underground Books. Originally from Los Angeles, Vicki lived in Oregon for over twenty years, where she developed an abiding love of the land and the Oregon way of life. Before turning to full-time writing, she worked for forty years as a singer/actress and performing arts instructor. Her blog, Between a Book and a Hard Place, focuses on the ups and downs of the creative process (http://www.vickirighettini.com). Vicki lives in San Diego with her software-developer, Jeopardy!-champion husband, and the world's shyest cat. Special thanks to Teddy at Virtual Author Book Tours for the chance to bring this tour to you as well as to the author for the SIGNED copy for review.  (THANKS!)  For more information on this title, the author, the publisher, or those on the horizon, feel free to click through the links provided above.  This title is available now via Mill City Press, so be on the lookout for it on a bookstore shelf or virtual retailer of your choosing.  Be sure to check out the other stops on this extensive tour for all sorts of bookish fun!

Great review! I'm glad you enjoyed 'The Blue Hour' so much!