Dreams of Beauty by Aubrie Dionne 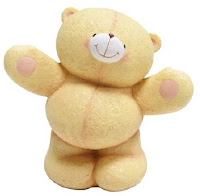 Hi there, everyone!  Welcome to the site!  As I sit here typing this entry, it's been a sort of off day...not really feeling the whole bombardment of information and everything (thanks mister cranky pants phone caller from earlier).  So, why do I bother to write a review when the atmosphere is less than ideal?  Well, to borrow a line from an older song (no, I wasn't around for the initial release, but most people have heard it at some point)..."I get by with a little help from my friends".  In this case, my {{{virtual}}} friends.  It's amazing the positive vibes you can get from someone you barely know or at least only know in a virtual stand point.  Sometimes these "relationships" can be deeper in a way...I mean you have the anonymity of the internet, but the freedom to share whatever you wish.  Good idea?  Probably not all the time.  Does it work?  More often than not.  So to all those well-wishers out there....yep, YOU helped push the little black rain cloud aside for a bit with all your happy thoughts.  (THANK YOU!)  Now, since this isn't a psych blog, I'll move along....
My random ramblings above actually work quite well with the title we are featuring today.  This is a story based upon a common knowledge fairy tale but with enough twists and turns that it becomes a story all its own (well one would, otherwise...yeah, not so original....but I digress because this tale truly is!).  With a message good for both mind and soul, I present to you the book choice of the day.... 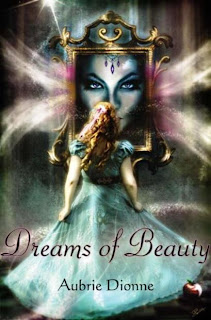 Dreams of Beauty
by
Aubrie Dionne
I know what you're thinking.  I can read your mind.  You are thinking...what a gorgeous cover!  Am I right?  Yep...knew it!  Bet I can guess what else you are thinking right now.  You're saying to yourself...this must be something to do with the tale of 'Beauty and the Beast'?  Yes?  No?  Hmmm...well I could see how you might arrive at the assumption since the title does include 'beauty', however for those that may have noticed the additional details in the picture (such as the apple, the mirror, the face in the mirror), you may have drawn a conclusion closer to the actual answer.  What's that?  Ah ha!  I knew I couldn't fool you!  The fairy tale elements of the story mimic to a certain degree that of Snow White....BUT, mimicing something does not in fact make it the same and so we continue with the review....

Emme is a bookish girl (look...it's one of us!) that lives vicariously through the adventures she reads.  Most of the value she puts in things is not ill-placed, just guided more by the standards of others rather than her own heart.  One day while out exploring with her childhood chums, they happen upon the old Hawthorne mansion.  Derelict and dilapidated, it has certainly seen better days, but it is a wonder what the imagination of achild can do when given such tools.  They enter the house of their own accord to discover a place which time has forgotten.  Cobwebs everywhere, broken glass....but what's this?  The portrait of a young man stares down from the wall just above the fireplace...it is one of the young Master's of the house, or shall we say former Master, Davian Hawthorne.  Even in still-life, the man's eyes sparkle with a hidden knowledge, a portion of which shall be imparted to you. 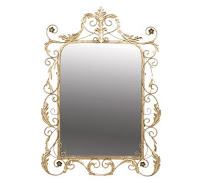 It seems that young Davian and his sister Lily came to live in this place many, many years ago after their mother passed away.  Lady Malicene became their guardian, but unbeknownest to them at the time, she harbored her own hidden agenda that would play a large part in their ultimate undoing.  You see, the Lady was obsessed with beauty in all it's forms, but most of all, she longed to capture it's eternal secret for herself.  When her new found family stepped in her way, the outcome left them in shambles.  Davian disappeared as did Malicene, leaving young Lily on her own.  Taking in this tale, one would think it nothing more than campside fodder...but to a young well-read girl like Emme, the fantastical tale seemed nothing short of magical...especially when such tales carry over into her dreams.  The problem?  The dreams are more and more frequent and despite the fact that the leading man has passed on (or at least been rumored to due to the events of over 100 years ago)...Emme can't quite shake the all too real feelings she is left with each morning.  Did Davian Hawthorne in fact perish all those years ago in an act of love gone wrong?  Or could he still be out there just beyond the reach of time?

Alrighty, so can you tell that I liked the story?  If you are a frequent reader of my site, probably...yes.  If not, no worries...the way you can often tell is I tend to ramble.  (Hey, at least I admit it....)  This story is one part Snow White mixed with a few role reversals and originality for the twists...TADA...you've got something new.  I loved the fact that Emme was relateable, especially to bookish folks such as moi.  All her life she's been waiting for something to happen, anything.  Unfortunately, she doesn't have the get-up-and-go-ness to do something about the stalemate her life as reached....at least until presented with a problem affecting not only her life but the entire town (nope...not saying anymore about that....spoiler-ish and all).  For some, this may irk you a bit when reading...for me, I took it as part of her character's personality and a result of the times, so it was nothing more than a detail to keep an eye on. 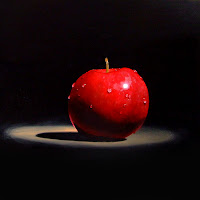 The title and cover work well with the story within...speaking of cover let's take a moment to ogle this one.  (Go ahead.....I'll wait......♩♪♫♩♪♫♩♪♫♩♪♫♩♪♫♩♪♫♩♪♫....are you done?  Alrighty then, moving on...) For fans of the beloved tale I've mentioned (Snow White), you get to see bits and pieces of its memorable features shown in a new light.  Let's see, one non-spoiler-ish example....okay yeah, time for a warning because there isn't one....***SPOILER ALERT*** remember how Snow White was in a glass coffin awaiting her prince?  Well, the events do not play out the same way before or after, but the "prince" is in the "coffin" this time around....due to a potion he took from the stand in "evil queen"...***SPOILER OVER***  All in all, you'll be drawn back time and again until you reach the conclusion...which definitely leaves room for a follow-up, just not the way you may have expected.
Okay, so now that I have given you all the sugary goodness, I must also share a bit of the bitter core as well.  Despite REALLY liking the story, there was a point or two that I was not quite as fond of.  First off, the initial jump from Emme's childhood adventure in Chapter 1 to her current 20 year-old-ish self in Chapter 2.  I actually had to go back and reread a bit of the end and beginning of both sections to make certain I hadn't missed something.  (Not detrimental, but still irksome.)  Second, while the story flow works well throughout the book, the spelling and grammar in the last chapter or so seems to have been rushed, and we all know what happens when we rush something; errors tend to abound, and do so here as well.  If you are a hardcore stickler for this type of faux pas, be forewarned.  (Whew!  See....that wasn't so bad?)

In the end, when weighing the good, the not so good and in-between elements of the book, I am left with a good feeling when passing on a recommendation to read it.  It speaks in a language we all know and love (fairytales) and imparts to the reader a message straight from the heart, while reminding us to value the truly important things in life.
Special thanks to author Aubrie Dionne for the eBook version for review.  (THANK YOU!)  Check out her site for more information on her latest and greatest exploits!
Until next time....happy reading!
Posted by Gina at 1:49 AM

Thanks so much for your review!

I have given you an award on my blog! Please hop over to accept it and pass it on!

You're totally right, I thought "what a gorgeous cover!" LOL this one looks really good, thanks for the review!

Very gorgeous cover! And the story sounds great as well. Loved your review, and have added it to my wishlist! Thanks!

Lovely review! It sounds really interesting. I'm always amazed that writers can take an old story and make something new with it. Sounds like this one was done very well.

And yes, I totally get you with the virtual/online friendship. Some days I don't know what I'd do without my "cheering section". Thank you!

Aubrie: No problem! Thank YOU for the great read!

Juju: Glad you enjoyed it!

Jeanne C: Thank you so much for the award (and congrat's on receiving it yourself!)! I am displaying it on my blog as we speak and will pass it on very soon...

Carrie at In the Hammock Blog: It is really something...

The1stdaughter: It was truly! I recognized elements of some of our favoite fairytales, but different enough to make it an entirely different story! ...and everyone needs a "cheering section" from time to time... =0) Thank you!

I hadn't heard of this title before. Thanks for reviewing!