Hello, hello!
It's Friday (well, at least when I'm typing this) and with its arrival comes the discovery that you made it through yet another week...congratulations!  Before we delve into the post of the day, just a quick reminder.  You still have time to enter the current giveaway being held here at Satisfaction for Insatiable Readers!  Enter for your chance to win a copy of Raven Stole the Moon by Garth Stein, courtesy of Sara at Terra Communications!  Entries accepted through midnight 03/25/10!  Now, on with the show... 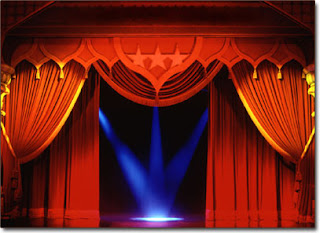 Lower the lights!  Cue the curtain!  As the heavy velvet curtain parts on the main stage, we are greeted with the site of....today's book choice!  Today we are going to celebrate a great YA book that actually came out last year, but has a sequel approaching it's release date soon thus inspiring it's appearance at the top of my TBR (and now in my RIF ~~that's Read In Full~~) pile.  I've wanted to read it for quite a while and WHOO-hoo...finally was able to do so.  Shall we begin?  As the sun rises over the distant hills, we come upon the scene as it stands....today's book of choice is.... 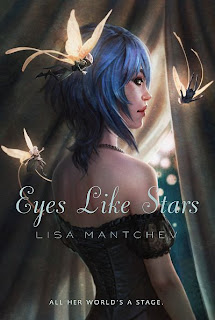 Welcome to the Theatre Illuminata where things are not always what they seem. Beatrice Shakespeare Smith, affectionately known as Bertie, calls this stage home and her family....well, let's just say they are quite a cast of characters. You see, Bertie was left on the theatre's steps as a young baby, never to see nor hear from her parents again (or so she thinks...dun, dun, dun...) All is going swimmingly in her day to day productinos despite chaotic moments that have her fingerprints all over them (hello, she is a teenager...gotta test those boundaries somehow)....until one day, the Theater Manager decides enough is enough. The gauntlet is thrown (so to speak...no actual gauntlet throwing occurred, but there were some sandbags and other larger objects of choice).  Bertie must find a way to contribute to the house like no other, or out she goes. Whatever is a girl to do? Whatever indeed... When you associate with the likes of pirates, fairies, and wind spirits, there is no telling what obstacles you'll encounter.  Set sail for adventure as Bertie discovers not only what the theatre means to her, but more about herself than she ever imagined...

Okay, so let's start at the beginning...this is another case of cover envy.  Take a moment to oogle the picture above....go ahead...I'll wait.....*hums Jeopardy theme*....  As beautiful as it appears here, it's even better in person.  The character face is not overwhelming, nor her fairy friends, thus leaving the imagination able to take the visage and run wild from there.  The colors?  Oh, simply a gorgeous combination of blues and golden glows...it's definitely stunning.  (Girls, wouldn't you love to try out that hair for even a short while?  Okay, well, I would at least and I'm not usually the crazy-color-hair-girl type...except at Halloween...yeah, I had a wig with thes big curls...in cotton candy pink....nope, no pictures, sorry!  Moving on...)

The writing style is very unique and the story line...well, I think we all would like to ability to call for a scene change from time to time at the very least. (SHOUTS:  Scene change....Italy, vineyard complete with personal library!...shucks didn't work....)  The characters...how to put it.  Since Bertie'scompanions are from the actual plays performed at the theatre, the reader is introduced to the Bard's (that's Shakespeare) great works (for the most part...although other playwrights works are discussed later on).  The fairies, Peaseblossom, Mustardseed, Moth and Cobweb, are from A Midsummer Night's Dream.  Her pirate love interest, Nate, heralds from the boat crew of The Little Mermaid.  Ophelia (constantly drowns herself performance after performance) from Hamlet, and Ariel (he's an airy spirit with a mission) from The Tempest are just a few of the cameo appearances you will meet that carry an air of familiarity.  For the uninitiated, it provides a great stepping stone to cross over into a read through of many of these great works.  But alas, I digress...I am getting off topic.

Overall, I loved the adventure.  The theatrical aire that is used in the most mundane situations creates not a scene of utter chaos, but an attention drawing head-lining performance that will have you following the script closely from start to finish.  My favorite character is a toss-up.  I LOVE Bertie's "can-do" attitude, carefree yet able to buckle down when needed soul, and her flamboyant ways (the hair....proof that she's not easily afraid of a little change)....but I also love her little fairy companions, specifically Peaseblossom as the nature she was given seems to be a miniaturized version of Bertie with a little less proper manners to hold her back and a whole lot of spunk to deal with her male fairy counterparts.  The two love interests are like oil and water...they simply don't mix.  First up is Nate; he's a rough and tough pirate, with a soft spot for Bertie...though he'd never take advantage of a situation to gain the upper hand.  On the other side of this oddly weighted coin is Ariel; he would (and DOES) use any opening to assert his power over this lady in waiting.  (What's a girl to do?  *SWOON*) 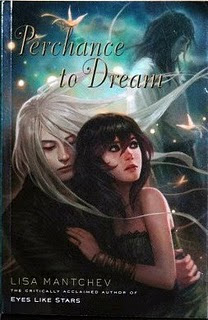 The ending will leave you breathless (for many reasons...ahem) and filled with questions....but in a good way.  They are the questions that lead to straight to the head of the waiting line for the next book, or to the pre-order option should you desire.  (I have to find out what becomes of....and who is Bertie's.....and is Ariel really....yeah, I can't finish those sentences without spoiling the surprise, but trust me....it's good...)  Full of imagination, creativity and a sampling of some of the great classics, author Lisa Mantchev contributes a unique addition to the YA genre. I was lucky enough to receive an ARC of the upcoming sequel, Perchance to Dream (SQUEE!), thanks to Lisa Mantchev and the good folks at the publishing company (Feiwel & Friends).  Stay tuned for it's release coming in the later part of May 2010, and a review prior to from yours truly.  (Can't wait to start!)  For more information on the book series, author, artist, and so on, check out the author's site (it's very interesting, just like the book.  Curious to see what is in the works for the next installment?  Guess where else she is....yep, Twitter!

COMMENT CREATOR
Since this book deals with the classics of both literature and the stage, I pose this question to you.  Are you a reader of the originals, that is to say the classics that many cut their teeth on?  If so, is it by choice or by assignment (okay, so do you pick them up of your own accord or were they assigned reads at one point or another)?  Your favorite?  Feel free to leave your thoughts and feedback in the comments below!

You're taunting me! I love the cover for this book (and the 2nd). It's on my wishlist.

I've heard a lot about this book! I'm sure it's a great one.

As for the classics, I've read a few of them. I read them because I'm curious to find out what they're about - if they're still famous after all these years, there must be something special about them.

I hated classics when I was growing up. I am just now discovering them (I'm almost 34). So many of the classics I think you have to be a bit older than 16 to really appreciate.

My favorite so far is Wuthering Heights.

Team Nate or Team Ariel? Personally, I'm going with Nate for now, but I think I need to read PTD before extending my final verdict. xD

I read some classics but mostly for school. I do occassionally pick up one on my own, and for the most part, I've really enjoyed them! Especially Austen. And Gaskell. And a tiny bit of Dickens.

Sarah (Book Reviews from Inside an Igloo) said...

Thanks for following my blog! I love your blog design, very cute. I'm following you now :)

Melanie: I'm with you...I'm not sure I trust Ariel at this point....swoon worthy sure, but trust...skeptical. Sounds like you read more classics than you thought!

Sarah: Glad to have discovered your site as well! Thanks for joining mine and I hope you enjoy! =0)

Found you through the blog-hop ... I really like your reviews!

Excellent review! I agree that both of these books have gorgeous covers, but am disappointed you're not going to post a picture of you with the pink cotton candy curls.

Sounds like an amazing book, and looking forward to your review of the sequel.

I've been really intrigued by this cover for a while now. I may actually have to pick it up now! Wonderful review!

As for classics or not...sadly said, I just haven't been able to find ones that I can really love. Besides, maybe, if you could say Oscar Wilde is "classics" worthy, then I would say him. I love anything he's done, even the depressing stuff!

The1stdaughter: Thanks! Glad you enjoyed it! It really is a fun read....the style is just enchanting. LOL on the Oscar Wilde stuff...I think he may qualify. (Haven't read him myself.) =0D

I haven't had the chance to read this one yet - but I really want to. I LOVE the cover for both it and Perchance to Dream!