Hi there! ~waves~  Welcome back to Satisfaction for Insatiable Readers!  For the newcomers to the site, welcome....feel free to browse around and stay for a while!  For those who more frequently visit, thanks for taking the time out of your busy day to check out my reading world happenings and such...you are all #1 in my book!  Now that the warm fuzzies have been dispensed, allow me to introduce today's post!

The featured book of the day is a unique read indeed for although it is a type of reference book, it deals with a subject we are all familiar with, a field we all dabble in, and a topic that definitely adds to your daily trivia knowledge.  Curious?  Don't worry, I won't keep you in suspense for too long.  The first part of our post is a rather interesting article (that came to me via Julie at FSB Associates) about the book and subject in review today....and away we go!

Picture this scenario: You're having a tête-à-tête with an old friend from your alma mater, who is a wine aficionado. So you pick an al fresco table at a chic little café, and order from the a la carte menu. However, your companion won't stop exchanging double entendres with the woman in the sarong at the next table. So you're stuck listening to the klutz of a waiter droning on ad nauseam about the soup du jour. At that point, you're ready to say hasta la vista -- but you don't want to seem like a diva.

Try to say all that in "English." You probably wouldn't change a single word. How else would you describe such a scene if it weren't for the thousands of foreign words and phrases we've snuck into our conversations over the years? We all use them without a second thought. But how much do you really know about the origins of the borrowed words and phrases you use every day?

Did you know, for example, that when you place an order for apple pie a la mode, that you are using a phrase that dates back to the days of King Louis XIV? His court became such a standard of good taste that the British aristocracy wanted to do more than dress in French fashion; they wanted to use their phrase for it, too. In the seventeenth century the term was anglicized to become alamode -- a light silk used to make scarves. And at some point in small-town America, the combined flavors of cooked apple, sweet pastry, and cool, creamy vanilla represented the very latest in fashionable, cutting-edge gastronomy, giving the term its modern meaning of "with ice cream."

And there's hundreds of other examples from France: laissez faire, joie de vivre, fait accompli, faux pas, I could go on but you'd only become blasé. And with good reason; English speakers have been word collectors since the fifth century, when the dialects of Anglo-Saxon settlers, Celts, and Norse invaders were cobbled together to create Old English. When the Norman conquerors arrived in 1066 it must have seemed natural to steal some of their vocabulary, too. By the end of the thirteenth century, more than 10,000 French words were absorbed into English -- and we still use 75 percent of them today.

But we've done more than add a French lilt to our lingo. Those Normans also introduced us to Latin. In medicine, we have words like post-mortem and placebo, while in legal language, Latin phrases such as in camera and quid pro quo are still bounced around the courtroom. And others have crossed over into broader use; an agreement or contract signed in good faith is said to be bona fide. However, in everyday use, the phrase has become interchangeable with the word genuine and usually describes someone or something whose authenticity can be trusted.

More foreign phrases joined the fray during the marauding, seafaring days of our English-speaking ancestors, who filled their boats with strange Asian spices, exotic fabrics, and loads of new words for all the animals, garments and foods they had discovered.

Even ketchup, that favorite sidekick of French fries, is an import, starting life as a spicy pickled fish sauce in seventeenth-century China. The word is a Westernized version of the Malay word kichap, which came from koechiap, meaning fish brine. The sweet red version we love with began to take shape when American sailors added tomatoes, which are excellent for preventing scurvy. In 1876 John Heinz launched his infamous tomato ketchup and the rest, as they say, is history.

And there are stowaway words in your wardrobe as well as your pantry; your pajamas, dungarees, and even your bandanna have their origins on foreign shores. Bandanna comes from the Sanskrit word bandhana, meaning to tie, from the tie-dying technique used to decorate scarves and handkerchiefs in India. The anglicized "bandanna" was incorporated into the English language during the days of the British Raj, though they're now more popular with wrestlers and cowboys who want to give their look a certain panache.

And while the Brits went abroad to gather additions for their dictionary, in seventeenth-century North America, words were coming to the English language by the boatload. Soon words from Italy, Poland, German, and Eastern Europe were leaping off immigrant ships and landing in the American English lexicon. To uncover the backstory on some of these, from alter ego to zeitgeist, explore the pages of A Certain Je Ne Sais Quoi -- The Origin of Foreign Words Used in English by Chloe Rhodes, published by Reader's Digest, and voilá! Soon you'll easily be able to schmooze with everyone at the next cocktail party without making a single faux pas.


Author Bio
Chloe Rhodes, author of A Certain "Je Ne Sais Quoi": The Origin of Foreign Words Used in English, is a freelance journalist who has worked for The Telegraph, Guardian and The Times as well as numerous other respected publications. She lives in North London with her husband. For more information please visit www.amazon.com.

Well now, I know I feel enlightened...how about you?
Of course, we can't just let this book go at that (or at least I can't...hehe) so on to my review!

Whether you are a lover of the written word in general, or you simply love to learn about where particular words and sayings got their start, this is a must read for you. Presented in a reference book style that allows easy look up of your favorites, it can be read straight through or picked up at random to provide a meaning, or saying at a moments notice. You may not recognize them all (I sure didn't) but those that are new will simply be fodder to add to your ever growing knowledge base. Ever wonder what "paparazzi" really means?  It's not pesky media folk, either.  It actually came from the Italian word for mosquitos!  (Hmm, definitely fits in some cases...)  How about the phrase "quid pro quo"?  This one comes to us with Latin origins, meaning something for something....such as this book is available in stores now; quid pro quo -- it's a fun and informative read for readers of all ages.  By the end of this book, you'll be surprised at how many languages you actually speak.....or at least are able to reference in witty or appropriate situations. 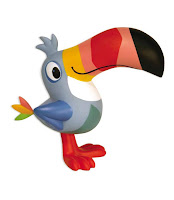 Article and review copy received courtesy of Julie at FSB Associates. (THANK YOU)  For more information, feel free to follow your nose (Toucan Sam reference...if you have to ask, never mind)...I mean the links...to continue your discovery!  Carpe diem everyone! (Love that phrase...honest and strong...and from a great movie, Dead Poets Society) Make the most of every moment, every day!

Hasta la vista (Spanish for "see you later".....sorry, I couldn't resist using at least one more from the book)....and happy reading!
Posted by Gina at 2:56 AM

Sounds really interesting - the kind of book I'd love to get as a birthday present - shame my birthday has just gone! Maybe Christmas . . .

Dorothy Dreyer: It was fun...more of a pick up and glance at than a read through, but good!

dkm1981: LOL. Starting that list a bit early? Naw...never too early when it's book related.