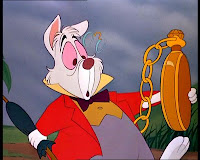 Hmmm, although that sounds like my typical morning chant (what can I say, mornings are not my strong point), it's actually more of a play for the festivities of the day.  Action, adventure, and some things that don't quite make sense, making sense after all....yes, my friend, today is a day full of wonder.

As I sit and write (okay, type) this post, I am listening to the new Alice in Wonderland soundtrack....might I venture to say that the score as well as the songs for the movie are both rather good!  With all the hub-bub about the new movie coming out (Friday, YAY!), we've seen quite an upswing in the amount of Alice related books (and more) available.  Today's pick adds to this fiesta if you will, but in a rather unique way.  If you'd like to venture down the virtual rabbit hole, read on.  Today's book of choice is.... 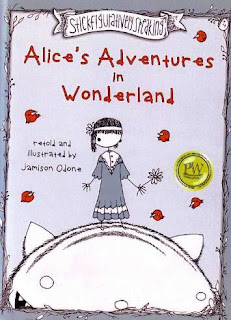 Imagine a world beyond your wildest dreams....or rather a world made up of your wildest dreams, and then some.  In this world, things are not always what they seem, and seems are not always what they thing.  (Confused?  HA!  That's kind of the point....)  You see, to make it in this world, you have to be little mad....mad as a hatter, some might say, for this is Wonderland.  A place that's as fantastical as your dreams with an even further stretch of the imagination.  In this particular adaptation of the Lewis Carroll classic, we find Alice and her friends in a rather unique state for their whole world including themselves have been illustrated as.....STICK FIGURES!  (Take a moment to gasp in awe, wonder, and then tilt your head in curiousity......are you tilted?  Good....)  This original take on the age old tale is a wonder all on its own for not only do you get to read through Alice's adventures with the inclusion of some of the original text, but you get to experience her tale through new eyes.  Who would have thought that a stick figure drawing could convey such a wide range of emotions and still carry a beloved story?  Certainly not many at first glance.....but then again, I bet with the Red Queen's involvement, many would have had a much different opinion on the matter, lest you lose your head.....

What can I say, I had so much fun with this one!  Requested out of curiousity and for the cute-osity as well (admit it, the cover does make you want to take a look inside), Alice's adventures this time around were on a whole different level.  Don't believe that a stick figure can make a good "character" for a fleshed out story?  Think again!  Author Jamison Odone manages to not only convey their 2D emotions in a 3D feel, but also adds a little something extra to the story.  (GASP!  He changed the classic?  Not really, read on....)  Ever think that the reactions Alice gave for certain situations were just a bit too mellow?  Well, here we get to see her inner thoughts, or at least what the author imagined them to be (which, by the way, fit quite well), thus allowing for a tinge of witty scarcasm to enter our beautiful garden of magic.  Experience the land of wonder in a newly adapted form and meet the characters that will live forever in the hearts and minds of those that believe a little imagination can go an extremely long way.  (Moving on...) 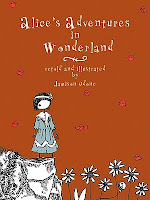 My particular copy of this title was an ARC.  We all know that the journey from idea to ARC to final book takes time, and in that time, things can be changed.  While there were several things changed within it's pages, the one thing I miss the most is the cover.  From what I've seen, it appears as though the final cover has the brown background, while I much prefer the blue.  Personal opinion....nothing more, nothing less.  In regards to the original text....I've read Through the Looking Glass several years back, but never the original version of this particular tale.  Would I recommend reading it before this edition?  Not necessarily.  If you've seen any of the movie versions, heard Alice's story, or aren't afraid to put your imagination to good use, you have more than enough tools at your disposal to enjoy this book from end to start, or rather start to end.  (Keep scrolling down for two updates hot off the press!)

COMMENT CREATOR
Since I believe most of you are probably going to see the new movie, I won't ask that question, but I propose this one....of the characters that Alice meets in Wonderland, which one do you find most intriguing and why?  You can choose from the story in book version or movie version....whichever comes to mind first.  The comments are open....share away!

ARC for review received courtesy of Riane at Publishing Works Inc. (THANK YOU!) For more information on this and other great titles, visit their website, BookBlogs.NING page, and (of course) Twitter!  Also, be sure to check out author Jamison Odone's blog and Twitter feed as well...some really interesting stuff!  (Like I said, if you're not on Twitter....um, why?)  You'll recognize them easily right now....they have stick-figure-tastic avatars currently.

***UPDATE***
So, I just heard back from Riane at Publishing Works, Inc....and two interesting bits of information are about to be passed your way!  First, the book did release today in hardcover, but the final cover....is the BLUE one! (Whew...I liked that one better anywho...)
Secondly...there is a special promotion that she is allowing me to extend to all of you.  If you are interested in ordering a copy of this book, stop by their website and use the Coupon Code BLOG at checkout for a 20% discount on the title.

So glad you liked the book! The blue cover you saw is in fact the final cover. And the book publishes today in hardcover!

Cool. Thanks for the update.

With the release of the film I can see a lot of people reading this. A great post, thanks for the update.

Awesome possum! I like the blue cover much better, too. Thanks for the coupon code. :-)

Thanks for the review:)

Can't make up my mind if I want to see the new movie or not - it's a visual overload - especially Johnny Depp's eyes and hair!

Riane: Congrat's on the release date! Yay for the blue cover being the final! (Honestly...it's just more whimsical...)

Jamison Odone: Anytime! Thank YOU for the fun read!

Tribute Books: Hmm...visual overload, now that can be taken two ways...too much of a good thing or too much crazy color? =0)

LOVE the soundtrack to the new movie coming out! And your review of this book really makes me more anxious not only to see the movie, but pick up this book as well! I just love the idea behind retelling this classic story! Perfect!

Oooh, the illustrations look so cute!!! I really enjoyed the movie too :)