Hi there readers!
Welcome to post one of two today here at Satisfaction for Insatiable Readers.  First up, we have guest post from non other than author Alan Jacobson courtesy of the great folks over at FSB Associates (Thanks, guys!).  In it you will discover a bit about his newest release (Velocity)﻿ as well as the writing process that brought the novel to life.  Shall we get started?

Let's give a warm welcome to author Alan Jacobson.....

A serial killer in wine country?

Unfortunately for him, FBI Profiler Karen Vail is there on vacation. 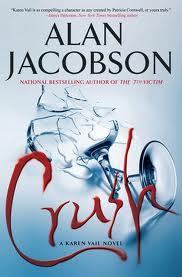 When I sat down to write my new thrillers, Crush and Velocity, the color red was prominent in my thoughts. Given that both novels revolve around a serial killer, you might think the red represented blood. Right?

Not exactly. Crush and Velocity bring my heroine, FBI profiler Karen Vail, to the Napa Valley. Yes, you're getting it now . . . red, as in wine. Those of you who've read my prior novels know that I immerse myself in the subject matter to learn everything I can -- a process that helps me create real characters who experience real problems that arise from who they are, where they live, and what they do.

For Crush, my exhaustive research took me to the Napa Valley -- so "immersing myself in wine" has you breaking out the violins, I'm sure. And though I was working 15 hours a day, 7 days a week, it was also tremendous fun. I enjoy wine and know the valley well and have always wanted to set a story there. But when you look under the covers of something you hold dear, you might stumble across things you weren't expecting . . . things that lead to emotions, conflict, action, suspense . . . and thrills for my readers. 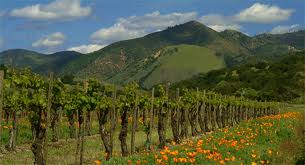 When planning a visit to the wine country, you're sold on picturesque landscapes, fun and romance. Glossy marketing brochures and flashy websites talk of tasting wine with hints of "grapefruit," "dark chocolate" and "anise," with bouquets of "black currant" and "truffles." While an experienced palate and nose would certainly verify such claims, there are deeper forces at work beneath the surface, lurking at the bottom like sediment in a used French Oak barrel. Napa, like any region built largely around its tourism, is a business. And where there's business in play, there's money to be made. And where there's money to be made . . . well, you have the recipe for the kind of tasty dish we thriller writers crave.

But I have to come clean with you about something. Both Crush and Velocity aren't just about the wine country. They're not only about the Napa Valley's underlying politics or business deals.Crush takes FBI profiler Karen Vail on her first trip to Napa to help solve -- you guessed it -- a case involving serial murder. If you've read my first Karen Vail novel, The 7th Victim, you might recall that I spent seven years researching, and working with, the FBI profiling unit before writing a novel that would take years to complete. But when I typed that final period, I felt I knew what made the profilers tick. Equally important, I felt I understood who these serial killers were, and what stirred their drink. Ah, yes -- drink. Wine. The Napa Valley.

Crush and Velocity might be about more than "just" the wine country, but the setting does serve as a character in the story -- in fact, the region's inherent vagaries are so tightly integrated in the novel that these two thrillers could not have been set anywhere else.

In Crush, Karen Vail arrives in the Napa Valley and stumbles on a fresh victim in the deepest reaches of an exclusive wine cave. Vail sees the trademark signs of a serial killer. She can't resist, and reasoning that local law enforcement is out of their league when it comes to serial murder, she jumps at the opportunity to offer her expertise. The sheriff's department is less than thrilled with her involvement, but after a second body is unearthed, Vail is named to the Napa County Major Crimes task force. She soon learns she is in over her head, because Vail and her colleagues must navigate powerful forces that serve to interfere with their work -- and this is where the politics and behind-the-scenes maneuverings that I mentioned earlier come into play. Making matters worse, Vail finds it impossible to accurately profile the Crush Killer because he's unlike any serial offender the Behavioral Analysis Unit has encountered. 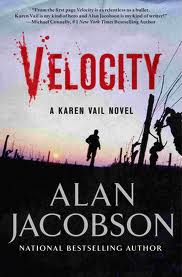 Crush ends with a bang -- but not before launching a story thread that sets the stage for a seamless transition to its follow-up novel, Velocity. The idea behind Velocity came to me as a result of an innocent remark the CEO of (deliciously addictive) Opus One made while taking me on a private tour of his winery early in my research for Crush (queue the violins). I realized I had an unusual opportunity to do things no other novelist has done. It inspired me to dig deeper, which led me to uncover things embedded in the wine country's culture -- and Napa's history -- to bring my reader fascinating behind-the-scenes intrigues that few people know about. Like the noses and palates of a fine Cabernet, these little-known aspects of the industry will enhance your experience as a reader. They became an integral part of Velocity, affecting Vail and her colleagues in ways no one can predict.

Crush and Velocity will take you on two wine country tours unlike any you've experienced. And after you've finished "tasting" Velocity, check out http://www.velocity.alanjacobson.com/ for wine country related activities, tidbits and tips I learned along the way.

In the end . . . well, I won't tell you about the end of either book -- because as is the case with "Alan Jacobson novels," both Crush and Velocity finish strong. In fact, New York Times bestselling author Andrew Gross said that Crush has "a finish with all the punch of a blockbuster Cabernet." Amen to that. Cheers. 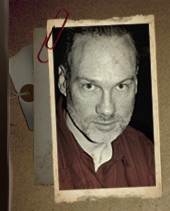 Alan Jacobson is the national bestselling author of the critically acclaimed thrillers False Accusations, The Hunted, Crush. Velocity. and The 7th Victim, which was named to Library Journal's "Best Books of the Year" list. Alan's years of research and training with law enforcement have influenced him both personally and professionally. and have helped shape the stories he tells and the diverse characters that populate his novels.
Alan's books have sold internationally. and both The 7th Victim and one of his forthcoming thrillers, Hard Target. are currently under development as major feature films. He lives in Northern California.

So there you have it!
A glimpse into two of his novels as well as the author behind it.
Next up for today, my review of this same featured title...so stay tuned.

Thanks for introducing us to Alan, an interesting interview.

Thanks for the info. I think I've seen this cover. Ahhh yes, it's free for the Kindle right now.