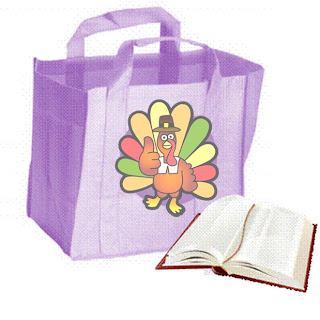 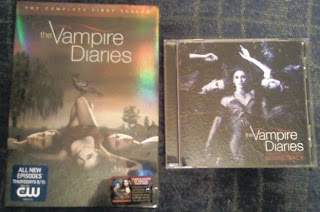 Vampire Diaries Season 1 on DVD
Vampire Diaries soundtrack
(via contest at Fanbolt)
YAY!  Can't say that I wasn't happy when I found out I won this set.  ^_^  I hadn't really had a chance to keep up with the show on a weekly basis, so this will definitely get me caught up on Season 1...and keep me musically entertained too.  If you haven't checked out the Fanbolt site or Twitter feed, you should!  All things entertainment can be found there including a great selection of forums where you can interact with other watchers, listeners, readers, etc about so many different topics.  Convinced?  See ya on there.... 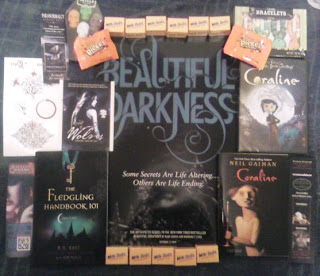 Coraline by Neil Gaiman (pb)
Coraline DVD
The Fledgling Hanbook 101 by P.C. Cast
Signed Raised by Wolves swag from author Jennifer Lynn Barnes
Assorted bookmarks featuring great YA authors + temporary tattoo sheet
Beautiful Darkness poster
Mix of Halloweenish candy *nom*nom*
(via awesome fun contest from Heidi over at YA Bibliophile)
Yes indeed, I was seriously excited when this package came...definitely gave me a smile.  Be sure to check out her website for some great reading recommendations and contest fun.  ^_^ 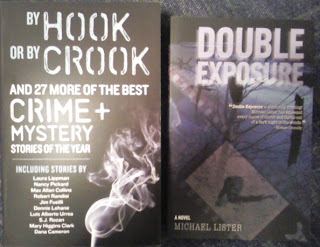 By Hook or By Crook (collection)
Double Exposure by Michael Lister
(courtesy of Ben LeRoy at Tyrus Books)
Far be it from me to ignore a tweet offering the chance to see what titles a publisher currently has listed...add to that the chance to request one or two and you can bet I'll be spending some time at the site.  That's exactly what happened with this publisher but there's one more aspect to the offer I didn't learn of until I was perusing a recent post over at Pop Culture Nerd...click here to check it out, it's quite moving and speaks to the power of reading. 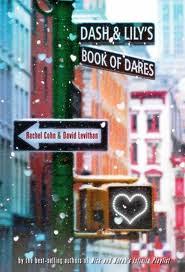 Dash & Lily's Book of Dares by Rachel Cohn and David Levithan
Having way too much fun with this one.  Seriously, bookish friends...you need to check this one out.  It's sweet, it's sassy, it's hilariously funny....great combo YA read with a severe lack of paranormal (which of course I like, but it's nice to take a break from it now and again)....oh and as of this post, it's already finished!  Yep, couldn't resist this one, simply had to devour it.  ^_^ 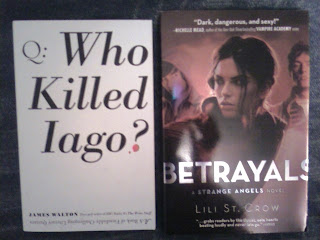 Q:  Who Killed Iago? by James Walton
Betrayals (A Strange Angels Novel) by Lili St. Crow
The first one there is a book of literary question funness; test your knowledge of every thing books and learn a bit along the way.  The second one is a sequel and no, I haven't read the first one yet but I've heard it's a good series so we shall see.

That's all for this week!
What did YOU get?
Do tell!

Wow! That contest Heidi had was crazy! Way to go! And yay yay yay for Vampire Diaries! Seriously, my favorite show right at the moment. :o) Great haul as usual.

You sure had a fabulous week!

Wow someone had a great week. I'm still awaiting my paper copy of Coraline. I have the DVD but didn't really like it, the book I'm informed is so much better.

the1stdaughter: Agreed...and what a surprise when I won! ~happy dance~ Gotta catch up on the VD...so behind. O_O

Petty Witter: Yup. ^_^ Yes...the DVD was okay...but the book (I read it quite a while ago) is GREAT. Definitely can't wait to see what you think...

Hey you! I wanted to pop in and say hello! Those are some fun things in your mailbox chick!

Woah! Awesome mailbox! I LOVE The Vampire Diaries! And I've hear Dash & Lily is really good! I hope you enjoy!

Thanks so much for hopping by my blog last week! I'm a little behind on my hopping.