Okay, so long time so previously scheduled post for you to read.
Today was to feature a book I read recently that I completely adored.
Seeing as I didn't get in this morning until 3 AM though....yeah, the brain wasn't so forthcoming with the ability to type up that said review.  No worries...it will appear next week...but you must be curious what had me out oh so late..err, early...﻿today, right? 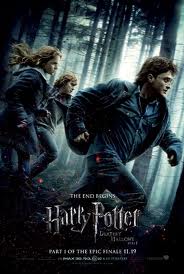 Why it was none other than "the boy who lived" and his merry band of mates.  Okay, so that sounds more Robin Hood-ish than HP but you know what I mean.  Yes, my friends I had the pleasure of attending a HP marathon over the past two days...all leading up to the midnight release for the long awaited beginning of the end.  Did I have fun?  Yes....despite the fact that the marathon had little to no attendance (I totally blame the lack of advertising and confusion on the price/times) which lead to almost a private showing for the two days. Was the midnight release worth it?  YES....to me and many other fans across the country.  Even our little theater was packed full of HP fans.  There were some in costume complete with robes, some with sorting hats, some merely claiming their house colors and others still who came just as they were.  The movie itself was grand.  The acting was good, the action heart pounding, the tragedies heart aching and so much more.  The worrisome question of just where they were going to cut the book/film in two was answered perfectly and occurs just as Voldemorte...oh, um...yeah...you'll have to see, but rest assured it's a good stopping point.

If you have seen it already, I'd love to know what you thought!
If you haven't and are planning too....have fun!
In either case, have a great weekend everyone...and as always, happy reading!

I saw it at midnight in my town's tiny, archaic little theatre, and there were SO many people there! It was brilliant!

I though the ending point was a great spot...right before the action really gets going. I will say, I felt it went a tad slow in a few spots, but it was visually stunning, true to the book (which made me really happy), and just as heart-wrenching as before.

I saw it at midnight as well. ^^ Here is my review link: http://thelittlecorneroftheworld.blogspot.com/2010/11/harry-potter-and-deathly-hallows-part-1.html

The ending spot was perfect. It wasn't one a cliff hanger (at least not for those who have read the books) and it just fit right. ^^

I haven't seen it yet so I promise to pop by when I do :)

Seeing the movie on Sunday. Only read up through book 4. own all the movies!

Melissa: Sounds like you had a great time and yes, there were a few slow spots, but they were necessary I'm afraid....can't wait til July next year.

jedisakora: Totally agree on the non-cliffhanger stopping point. Makes it curious for those that don't know what happens and a great fit for those of us that do.

Michelle: Egad! You haven't read any of the books past 4! *tisk*tisk* Enjoy the movie though! ^_^

We're going out later today to watch it! Yay!!

Loved the books, but think I'm one of the few people who haven't seen any of the movies. Glad you had a great time!

Oh I can't wait! My birthday is this week and all I asked for was to go see this and go out to a nice dinner. It looks fantastic! I'm so glad to see it getting so many great reviews! Yay!

Two days of Harry Potter? That sounds like fun!