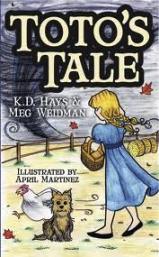 When the sun ducked behind a cloud though, I could see that under all the makeup she was wearing her face was wrinkled like a prune.
She was old, but she walked with pride, like she was important and she knew it and she knew that everyone else knew it too.
-- pg 13, Toto's Tale by K.D. Hays & Meg Weidman

This is such a cute book!  Think The Wizard of Oz but from Toto's viewpoint.  Creative and fun so far.... 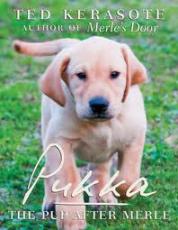 After our morning's lessons we sometimes get to do something fun instead of Ted going to work right away at his desk.  One day we put in a new dog door since Merle's door was so old and the flap was torn from having been used so much.  That Merle, now there was a dog who liked to go in and out.
-- pg 94, Pukka:  The Pup After Merle by Ted Kerasote

I so want Toto's Tale. Another for my wish list.

Petty Witter: Yay! It is really fun so far...didn't want to put it down last night. ^_^

Ahhh...love the doggies! Plus, The Wizard of Oz was my all time favorite movie in my youth. Once, when the color on our TV went out I turned to my mom and said, "Mom, they must be in Kansas now!" I kid you not, it's one of the most hilarious stories from my youth. LOL Would love to read Toto's side of the story! :o)

Lizzy: Thanks! What can I say...gotta love the furry little guys. ^_^