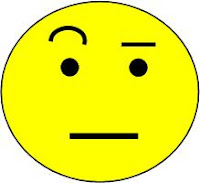 What's with the questioning look?
Oh, I know...the title of the post, right?
What?
It was my attempt at passing along a little bloggerly advice...a "virtual proverb" if you will in the spirit of today's post.  It's a "tasty" little quiz (purely for fun) from author Caroline Taggart coming to you from me courtesy of Ruby at FSB Associates. (Thanks, Ruby!)  Ready to see how well you fair in a battle of wits or rather wisdom?  Here. We.  Go.

A Quiz on Proverbs
By Caroline Taggart 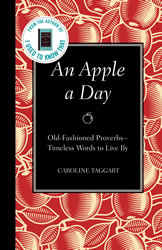 Author of An Apple A Day: Old-Fashioned Proverbs --Timeless Words to Live By

Let's answer the second question first. A proverb is defined as 'a piece of wisdom or advice, expressed in a short and memorable way.' It can be anything from a quotation from the Bible ('Spare the rod and spoil the child') or Shakespeare ('The course of true love never did run smooth') to a piece of folk wisdom whose origins are lost in the mists of time ('An apple a day keeps the doctor away'). And to go back to the first question, the point of this book is not only to explain familiar proverbs but also to see if they are still relevant today."

Many of them are relevant. There's a world of truth in sayings, such as "Haste makes waste," "You're only young once," and "Handsome is as handsome does." There may be room for debate over the apparent contradiction of "Many hands make light work" and "Too many cooks spoil the broth," but it's worth remembering that each individual proverb is only one person's take on a situation, the product of his own culture, personality, and mood at that moment in time. Part of the beauty of proverbs is that you can adopt the ones that suit your needs and ignore the others -- you're not going to end up in jail either way. If you are cautious by nature, you can take "Look before you leap" as your motto; if "He who hesitates is lost" is more your line, then that is fine, too.

So without taking any of it too seriously, here is a short quiz on the origins of familiar proverbs and my take on them. Can you match the proverbs (1 - 5) with their sources (a - e)?

1. Don't count your chickens before they are hatched

2. Necessity is the mother of invention

3. Brevity is the soul of wit

4. You can't make bricks without straw

5. Early to bed and early to rise makes a man healthy, wealthy, and wise

a. A piece of fifteenth-century folk wisdom

b. A fable by Aesop, written in the sixth century B.C.

c. An eighteenth-century poem about a sofa

d. The Biblical story of the Children of Israel being enslaved in Egypt

e. A quotation from Shakespeare's Hamlet

1. B, This is the moral of Aesop's The Milkmaid and Her Pail. A milkmaid, carrying a pail of milk home on her head, dreams of what she will do with the profits of selling it: Buy some hens from the poultry farmer; get rich on the proceeds of the eggs and chickens they will produce; buy a pretty dress that will attract all the boys; and toss her head at their advances. Unfortunately, as she dreams, she actually does toss her head -- and spills all the milk (which, come to think of it, she may then have cried over). So the warning is against acting prematurely on something that may or may not happen.

2. C, The English poet William Cowper did write a poem about a sofa -- a female acquaintance had challenged him to do it -- and it contains the lines "Thus first necessity invented stools/Convenience next suggested elbow-chairs/And luxury the accomplished sofa last." The first line is the important one here: Somebody got tired of standing up all the time, so he invented something to sit on. And so it is has been throughout history: When somebody needed a cart to carry a heavier load than he could manage himself, he invented the wheel; when buildings got taller and people didn't want to walk up all those stairs, they invented the elevator. The same poem, by the way, also tells us "variety is the spice of life."

3. E, A lot of proverbs come from Hamlet: "You've got to be cruel to be kind" and "Desperate situations call for desperate measures" are two others. In this context "soul of wit" means "essence of wisdom," so the speaker, Polonius, is advising himself to keep his information brief and to the point (he is trying to tell the king and queen that Hamlet has gone mad). But we -- the audience -- know that Shakespeare is having fun at his character's expense. We have just seen Polonius giving endless worthy advice to his son, Laertes, and we know that he wouldn't recognize brevity if you hit him over the head with it. Irony aside, however, it is sound advice: Keep it snappy and you have a better chance of keeping your audience's attention.

4. D, This is from the Old Testament book of Exodus. The enslaved Children of Israel spend their time making bricks -- of which a key ingredient is straw. Moses, their spokesman, tries to persuade Pharaoh (the Egyptian king) to "let my people go." Pharaoh, furious at this impertinent request, ordains that not only should the Jews stay in slavery, but that from now on they will no longer be given straw. They will have to find it themselves and still produce the same number of bricks each day. The point of the proverb is that this is kind of hard. "Give us the tools," the Children of Israel might have said, "and we will finish the job."

5. A, People have been making this irritating claim for over 500 years -- and the really irritating thing (for those of us who hate getting up in the morning) is that it is true. Once it was sensible not to stay in bed during daylight hours, when you could be working. And you wouldn't want to waste candles sitting up late: You'd think electric light would have changed all that. Maybe, but the "healthy" part of the argument remains valid. When it gets dark, our levels of the sleep hormone melatonin rise and our levels of the stress-related hormone cortisol lower, making it easier for us to unwind and go to sleep. So although artificial light allows us to party till 2 in the morning, if we choose, it lessens our ability to cope with stress and with general wear and tear. So off you go to bed, and don't forget to set the alarm!

Copyright © 2011 Caroline Taggart, author of An Apple A Day: Old-Fashioned Proverbs --Timeless Words to Live By

Caroline Taggart has been an editor of non-fiction books for nearly 30 years and has covered nearly every subject from natural history and business to gardening and astronomy. She has written several books and was the editor of Writer's Market UK 2009.

For more information on the book and the Blackboard Books, please visit http://www.rdtradepublishing.com/

Currently reading through this book as we speak (well not literally because that would make it very awkward to type); review to follow later this week.

Haha That was fun :D I didn't do very well. But the answers were very informative.

Woo! I got them all right. All my education is good for something! Haha. I knew the Hamlet and Aesop ones from my reading, then extrapolated the others.

I loved this. Quizzes (when not for points) are awesome!

What a fun post! Bravo! I was wrong but still loved it.

What a great, informative post! I never knew "necessity is the mother of invention" had anything to do with sofas...

I dare I learned something. Huh...that doesn't happen much. (j/k) I love tid bits of nuggety information like this. It's something to store in your pocket and pull it out at parties.