Hi there readers!
Welcome back to Satisfaction for Insatiable Readers. Today we have a special treat for you as we welcome to fabulous YA authors who've recently celebrated the release of yet another book.  Yep....prolific they certainly are.  This book happens to be book 2 of a trilogy and has LOADS of action, story and danger.  Allow me to introduce today's blog guest and book of choice.... 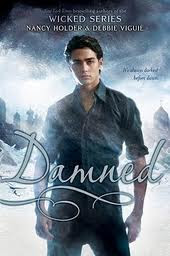 For those who haven't read book 1 (CRUSADE), there may be a spoiler or two so feel free to seek thee out the first title (or grab a quick refreshed by searching my review of said book right here on my site)....but I'll try to keep them at a minimum.  Let's check in on the characters we've come to know, shall we?

Eriko, the Hunter and former leader of the Salamancan group, is dealing with the changes....though not in her position but rather physically and mentally due to the changes granted her by her role. Holgar, our resident good guy werewolf, is dealing with echoes of his past as he struggles to maintain the life and health of his fighting partner Skye. Speaking of Skye, this time around she's not simply the White Witch they defer to for power boosts, protective spells, and healing....she has some soul cleansing of her own to do and her past is about to be dragged out front and center.  Then there's Jamie the hot headed Irish man who harbors a strong hostility towards the Cursed Ones and werewolves alike making him totally focused in a fight but we're about to see a semi softer side of him...yep, that's right, he has a heart and it beats right now for a fellow fighter. (Oooh ...) Side stepping a bit to Antonio, a Cursed One yes but with his eyes on the cross (studying to be a priest as he was doing in life) and his heart with his fighting partner and new team leader, Jenn...his will may be strong be he's not invincible as we're about to find out.  Then there's Jenn. Formerly sweet and somewhat innocent, she's been betrayed by family, lost her sister (sorta) to the Cursed Ones and lost her heart to someone that loves her yes but can never truly be with her.  Oye...add to that the new role of leader to this motley crew and well, let's just say she has A LOT to deal with and it's about to increase ten fold. As Jamie would say...there's a blimey lot of trouble ahead. The battle for our lives, our souls continued as the Cursed Ones gather in strength and numbers but this group as well as a few others we'll meet along the way....never say die.

It's brash. It's action packed. It's a lot heavier than your typical YA paranormal novel not only with relationships and characters but with the dose of religion injected.  That's not to say it preaches Becquerel honestly it doesn't; rather it takes a more accepting few of many belief systems asking the reader to keep an open mind about them all as the story is woven.  Will some take issue with this aspect? Perhaps...but remember fair readers, this was a story created to entertain. Sure it might have some underlying messages of good will to all but what would truly be bad about a more cohesive society where we can live side by side and respect one another, you know?   Something to think about....

In conclusion, a series addition that lives up to the power held in book 1.  You'll grow to love the characters even more as you experience their pasts and follow along as their stories continue to unfold.  Recommended read for teens and older due to violent content...it's not extreme but better suited for that age group.  Be sure to check back in tomorrow as day two of the tour stop here at the site welcomes an interview with both authors that frankly....you won't want to miss.  Trust me...I've seen their answers...good stuff!

For more information on this book as well as their other works, be sure to check them out online or follow along on Twitter (1 or 2).  Special thanks to both authors as well as Erin, Ms. Holder's fabulous assistant, for both the review copy and the chance to bring their tour front and center.  Oh and if you're still reading this post at this point....tomorrow's stop may hold a little surprise too. ^_^

Thanks for such a thoughtful (and well-written!) review. I hope everyone enjoys the D*mned book.