BLOG TOUR: The Tale of Lucia Grandi by Susan Speranza

Welcome back to a crazy frantic day here at Satisfaction for Insatiable Readers.  Starting with a refrigerator gone amuck and a missing guest post, oye....whoever ordered the heaping load of crazy needs to lay off!  Doesn't life know its a holiday week?  I mean really.  Good grief!  Anywho...

Yes, today was to be a blog tour stop complete with guest post for a special little read making its way through the blogosphere right now.  *looks around...high and low* Needless to say, said post never made it to me (*darn virtual goats*) but that doesn't mean you still can't learn about the book and join the fun, right?  RIGHT!  So in the spirit of anything other than real life, with a smile on my face (forced or not, it's there...promise!) and a skip in my step (okay, NOW I'm exagerating), let's take a look at the latest celebration from Lightning Book Promotions.... 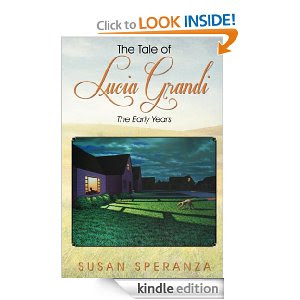 The Tale of Lucia Grandi:
The Early Years
by
Susan Speranza

When an old woman is asked to tell the story of her life, she tells is an intense and poignant tale about growing up in and surviving an irrational, warring suburban family during the 1950s and 60s. The narrative is told from Lucia’s perspective as the second child where she and her siblings are caught in the middle of a lifelong war between her mother, Ruth, an overbearing, unhappy homemaker, and her father, Leonard, a manipulative, sometimes violent New York City cop. Lucia is the silent, thoughtful eyewitness to her parents’ constant and sometimes life-threatening battle.

The story is told as a memoir; each chapter describes a particular incident in Lucia’s life which shows the constant struggle between her parents and the perverse effect it has on her and her siblings. From her complicated and unwanted birth, to her witnessing a suicide at age 3, to her stint as a runaway at age 14, the story progresses to the final crisis where as a young woman, she is turned out of her house and banished from her family forever.

This timeless story of one woman’s courageous attempt to come to terms with her past and the troubled family that dominated it is powerfully and poignantly told.

Powerful right?
Loving the writing style chosen as well, the fictional work as a memoir.  I've run across a few of those recently and it really makes them more personal somehow.  Anywho...

If this sounds like YOUR cup of tea, FABULOUS!  You know why it's fabulous?  I'll tell you why....because you have a CHANCE TO WIN one of two digital copies of this very book!  All you have to do is enter via the rafflecopter form below and WHOOSH...you'll be in it to win it!

Special thanks to Stormi at Lightning Book Productions for the chance to participate in this tour.  For more information on this trip through the blogosphere as well as their upcoming tours, be sure to stop by their official site or check them out on Pinterest.  To learn more about author Susan Speranza, check out her online site, like her on Facebook, or follow along on Twitter.