Hi guys!
Welcome back to Satisfaction for Insatiable Readers…the place to be when you’re in the mood for food of the bookish variety.

We’ve have a small break due to my crazy schedule and though I intended to post this review yesterday, it simply wasn’t in the cards.  My apologies friends for leaving you without some type of fodder to appease your book loving appetite but I believe today’s post should help quench that thirst…though it may leave you longing for adventure.  That’s right…we’re setting sail on the high seas with none other than Silver and Hawkins, just not the exact personas that the names bring to mind (for any Treasure Island fans that is).  In honor of Mr. Robert Louis Stevenson’s birthday this past Tuesday and in celebration of its successful release stateside, I bring to you today’s book of choice… Silver:
Return to
By
Andrew Motion

It's almost forty years after the events of Robert Louis Stevenson's Treasure Island:  Jim Hawkins now runs an inn called the Hispaniola on the English coast with his son, Jim, and Long John Silver has returned to to live in obscurity with his daughter, Natty. Their lives are quiet and unremarkable; their adventures have seemingly ended.
But for Jim and Natty, the adventure is just beginning. One night, Natty approaches young Jim with a proposition: return to and find the remaining treasure that their fathers left behind so many years before. As Jim and Natty set sail in their fathers' footsteps, they quickly learn that this journey will not be easy.  Immediately, they come up against murderous pirates, long-held grudges, and greed and deception lurking in every corner. And when they arrive on , they find terrible scenes awaiting them—difficulties which require all their wit as well as their courage.  Nor does the adventure end there, since they have to sail homeward again...

A story of the high seas with wit and whim, fancy and danger, shipwrecks and treasure…but somewhat lacking on the adventure.

Here’s where I get all hip-hop-style and do the break down dance on the book.  The story was good and the characters were certainly worthy of our attention but if you’re looking for a rollicking story that captures you by your whiskers such as the original…you might be put out like those three sailors marooned on the island.  That’s not to say the journey was un-enjoyable because honestly it was, it just lacked the ability to sparkle as brightly as the treasure first uncovered by the infamous pair.  However, it did make its mark in other ways if you’ll permit me a moment to explain… 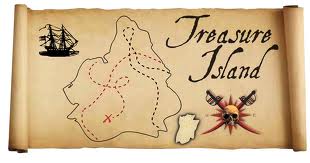 We have a young Mr. Hawkins (though older than his father when he set out on that fateful voyage many of us have read previously) and a young Ms. Silver….that’s right, MISS; as in blow-me-down, Mr. Silver had kids and a girl no less!  Don’t go passing her a parasol though because she is her father’s daughter through and through and guff she will take from no one…NO ONE.  This pair are sent forth on a quest to retrieve the remaining silver and arms left behind on Treasure Island with a sea-worthy ship, a magnificent captain and a fairly decent crew….I say fairly decent because where there is treasure and old grudges to be had, trouble usually follows (and it does).  Yo ho yo ho and a few bottles of rum later and BOOM….LAND HO!  But wait, what’s this?  There’s movement on shore…and it seems as though it’s a much greater population than first marooned.  Seeing as how they were all gents left behind and barring the possibility of a DNA change situation, something happened to create the mixed party spotted on shore…but what indeed.  Are they friend or foe?  What of the conniving fools left behind or better still, what of the silver?  So many questions, so few answers….but don’t worry, they may be slow in coming, but come they will…and that’s not even half the story.

You see, though the book is titled appropriately for a dashing daring swashbuckling treasure hunt, it actually focuses more on the human condition.  The relationship between father and son (or daughter), the deterioration of the human mind, body and soul (hello marooned pirates!), lives found and lost, the bonds that can form between those not related by blood but something at times even stronger (several noteworthy instances of this abound) and even a fleeting glimpse of young love.  All these things and more play out before us thereby making it more than simply a treasure hunt (though those are remarkably exciting too) but a journey towards revelations only discovered through life experience…albeit they are generally scattered over many a year as opposed to a few months time but they make their point nonetheless leaving Mr. Hawkins and Ms. Silver in a whole new light (and world…*mini spoiler*…~whistles~) 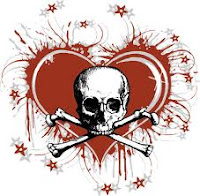 So you see, my seafaring friends, if you set out on this reading adventure with expectations of a repeat performance of the beloved original, you may be sadly mistaken.  Though there are references to and reminders of both in plain sight and in shadow, this story merely relies on its predecessor for its history, its relations if you will, but allows a new duo to emerge righting the wrongs of the world while seeking their fortunes of mixed values.  There are those to cheer for and those to leer at but in the end you‘ll discover an adventure with more than silver running through its veins; this time around there’s a healthy dose of heart.

Recommended read for teens through adult readers; the language is fine and the risqué situations are practically nonexistent however the cruelty of man against man makes me avoid suggesting it to a younger audience.  The world can be bad enough at times, no need to introduce it any earlier even in fiction format.  Review copy received courtesy of CrownPublishers / Random House Inc.  (THANKS!)  For more information about this title as well as their complete catalog, be sure to visit their official website, like them on Facebook, friend them on Google+, pin them on Pinterest, or follow along on Twitter.  This book was released earlier this year and should be available now on a bookstore shelf near you.

Until next time…I’m off on my own adventure (aka the Twilight movie marathon and midnight release of the final film, woo-hoo!) and wish you much happy reading!

I suppose that this did have a lot to live up to. Obviously not as bad a read as I thought it might be, perhaps it would be enjoyed more by those who weren't familiar with the original. A book I will doubtlessly get around to reading but only when it becomes available at our library. Thanks for such a concise, informative review.

My pleasure! I started to say the same thing but then realized those with knowledge of the first story would have the slight benefit of familiarity. Either way, this one works. ^_^