On the menu this week...a book oh-so-appropriate when we consider what day today is.  What day it is you ask?  Why it's Robert Louis Stevenson's birthday (November 13, 1850), that's what day!  You know, the infamous author that brought us such fabulous works as Kidnapped, the Strange Case of Dr Jekyll and Mr Hyde, and....Treasure Island.  This week's featured title plays right into or rather off of the pages of the latter so grab your compass, and set sail for adventure!  Today's tasty teaser is just over the horizon....and aptly comes from the same page number as the age he would have been had said author still been alive today... 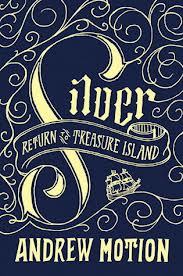 The captain began by telling the men a little of what he and I had seen through the telescope the previous evening:  enough to let them understand we might be close to danger, but not so much that they might be daunted.  They responded with a show of courage that did them credit -- clapping one another on the back, and boasting they were afraid of nothing.
-- pg 162

Hmm, I hope all of that bravado isn't wasted, I mean look at the adventures had in the original story!  One can only case what awaits the kin of this infamous duo when seeking the rest of the fortune left behind.  In my reading thus far, they're only about to set off on their high seas voyage...I'll keep you posted on the "weather" encountered.  This book was released August 2012 from Crown Publishing, an imprint of Random House, Inc. and should be available now on a bookstore shelf near you.

Interested to know what you make of this. Part of me so wants to read it and yet another part of me, perhaps the greater part, is so reluctant to do so.

O nice. Sounds like it would be a fun audio.