Hi guys!
Welcome back to the place that aims to please the reader in you…Satisfaction for Insatiable Readers.

Today, we play host to a stop along an exciting tour brought to you by the fabulous folks over at Tribute Books.  (Hi Nicole!)  It features a Young Adult title that’s set to kick start what thus far reads as a pretty AWESOME series.  Don’t believe me?  Oh ye of little faith.  Have I ever steered you wrong before?  Besides, it’s not merely my opinion of the book you’ll be basing your decision to read upon, oh no.  You are in for a treat my friends, a treat indeed and that treat will include a sample of the book AND a chance to win a copy to call your own!  But before we get too carried away, allow me to introduce the featured title properly…deal?  Good.  Today’s book of choice and blog tour guest is… 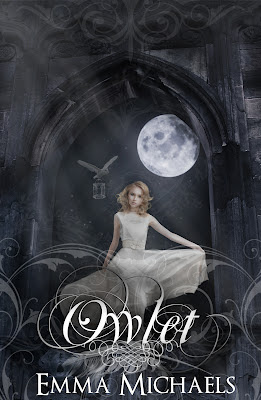 Somewhere between falling and flying… there is a girl.
Iris has a secret. She lost her memory eight years ago and never told a living soul. After an asthma attack one night she finds out that her dreams of a strange house on a snowy island may be a memory resurfacing but the more she learns about the past the more she realizes the life she has been living is a lie. As the façade her father has built starts to crumble around her she will have to decide which means more to her; the truth or her life.


Sounds good right?
Oh but it was!
Let me see if I can sum it up for you so that you can move on to the next part of the post.  Yes, yes....I am aware that I am breaking my usual protocol of rambling on and on and well, you get the point but there are TWO more parts to this tour stop and I want to make sure you don't get lost in my subtext.  Anywho...

This book, this book....this wonderfully awesome first book in the SOCIETY OF FEATHERS series (the sequel to which is planned for October 2013....wait 2013?! Egads that's a ways off!) really knows how to get the party started.  Now, don't get the wrong idea, there's no cake and balloons, in fact there's a lot more hiding and secrets and revelations in the making, but it IS a party in the fact that everything comes together so nicely from such a unique idea.  I've honestly never read a novel where a human's soul was part bird.  Sound odd?  Not really...once you get to the explanations and get to them they do, eventually.  Hey, events have to unfold in order for revelations to be made...even those they had no intentions of revealing until a MUCH later date.  It was really interesting to see how they worked together (the two sides of their soul) and the limitations that they each had while together and apart.  Aside from the story lines originality, you also have some incredible characters.  My favorite was actually Iris....and Falcon.  Okay, so I'm cheating, I chose TWO but I could have kept selecting more because they all have something unique, something special to add.  Back to my favorites....I value Falcon for his pure heart despite its tainted beginnings...and Iris, sweet innocent Iris has so much untapped strength within that once unleashed I can't imagine where it might take it.  Might also explain what happens in the little excerpt of Book 2....

Moving on....the only part I found difficult was connecting the dots on who's who throughout the story as additional characters were added from Iris' past; lotsa names, lotsa history. The cool part though is that you get reintroduced to them all (thanks to a tragedy that occurs...the not so cool part and OH SO SAD!) while learning exactly why they were valued as friends and family from someone who knew them well.  I can't say much more without spoiling it for you but suffice it to say that the mysteries will keep you guessing, the characters will keep you connected emotionally and the story line will have you flying high (pun totally intended).  It's a breath of fresh air and a change of pace from the norm in YA right now; definitely a book I'll be recommending to YA readers of all ages.

Now, let's move on to the next part of the post, shall we?  How’s about that excerpt I mentioned earlier to tempt your reading taste buds even further?  ^_^  Your wish is my command.  Ready, set….READ!

When they made it to the house, Falcon felt like he was going to drop in the doorway but he kept moving toward the stairs. Slowly, one step at a time, he made it to the top. When he finally got Iris to a bed, he nearly fell onto it and Diana had to stop Iris from rolling off his back in the wrong direction.
“Go change out of your clothes and find something old of Roger’s. I will take care of her. If we let either of you get too cold I won’t be able to save you,” Diana said, looking from Falcon to Iris.
“Why would you save me?” Falcon was now willing to speak since Iris was safely laying on the bed in Diana’s care. He ignored the fact that his words sounded so strange from all the shivering. He knew she would save and protect Iris, even if she hadn’t known who he had been to her family, but she could have had Joseph be the one to help her. She could have just left Falcon to his own devices.
“You love her whether you are her mate or not. I should have learned more before telling her about who you were. I didn’t even think about that. Well, you’re here now. Roger wouldn’t have let you be here unless he had known you. Unless she had too. You know she doesn’t remember, don’t you? We thought she did but...she just doesn’t. I just...I panicked. We have been waiting for Caleb to discover the secret and send an assassin or a vulture and I was terrified that day had come.”
“I know,” Falcon said quietly; he was fading fast. Crawling to his feet, he searched for clothes while Diana started hooking Iris up to the machinery for her asthma. Falcon had almost forgotten it would be harder for her because of her affliction. Her body wouldn’t know what side of the soul to listen to while she was healing. The Stryx inside of her would be subjected to her bad health and have to feel it on its own, while the normal half of her soul came back to life. It would be unnatural since asthma was never a part of the Stryx soul’s form...whatever that form might be.

Oh buddy, what an excerpt for me to have drawn from the virtual bag!  (Thanks again, Nicole!)  This scene happens right after a fairly major (yet not ENTIRELY true) revelation about Falcon and Iris’ connection to each is made by someone dear to her.  It’s heart stopping and confusing and…..SO not the full story but as often happens in fiction (well, heck…even in REAL life) someone flies off the handle (Ha! Unintentional pun…love it….) and possibly winds up dead.  Hey, you didn’t think I was going to ruin the outcome of this revved up scene now did you?  No siree.  You’ll have to keep following the blog tour to discover more as you read along its virtual route….or of course you can always pick up a copy of the book yourself and squash all that suspense you’re dying of.  ^_^  Oh and speaking of getting a copy to call your own, it’s…. 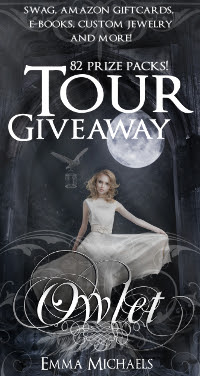 Prizes up for grabs include...

The variety of prizes available make this contest open to one and all (some prizes are US only but that’s all sorted out on the entry form).  Entries are being accepted as we speak all the way through the end of December 2012; but you can’t win if you don’t enter!  Get your hat in the proverbial ring by filling out the rafflecopter form below….

Ebook for review received courtesy of Nicole at Tribute Books as well as the opportunity to bring this blog tour to you.  (THANKS!)  For more information on this title as well as their full catalog, be sure to visit them online, like them on Facebook, or follow along on Twitter.  To discover more about the world of author Emma Michaels, seek her out online at her website, on GoodReads, at Facebook, or on Twitter.  To stay up to date on this blog tour, be sure to follow the official hashtag on Twitter (#Owlet).  Looking to catch up on the read along?  Not to worry!  Just follow your mouse to the sites below and become further enchanted by Iris’ Never-Never…. 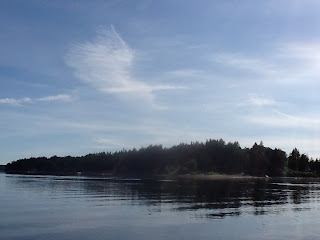 Gina, I always look forward to your stops on any of our blog tours because you always do such a fantastic job. You make it feel like we're sitting over coffee talking about a great read. I'm so glad you enjoyed 'Owlet' and can't wait for more from Emma when it comes to Iris and Falcon. How can you not root for those two, right? Stay tuned! There's definitely more to come in this new trilogy :)

Tribute Books: Aww, thanks Nicole! Always love a good tour with your guys as well. So many great reads to explore and this is DEFINITELY one of them. Ooh...trilogy? So I have TWO more fab additions to look forward to....sweet. ^_^

Sounds like a great book! And what a great contest! Couldn't agree more with Nicole, as your posts are like sitting around talking books with a friend, and always awesome! :)

Great review Gina, this is on my reading list and I am delighted that despite a lot of names you enjoyed!

This book looks great! I love the cover and excerpt. Thank for the chance to win! I think I'm going to like hanging around here. So glad I found this blog through the tour.
-Brooke Banks