Hi guys!
Welcome back to Satisfaction for Insatiable Readers...the place to be come rain or shine because you're always just in time...for a good read and today is no exception! 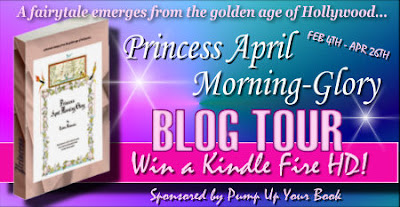 Today, we are playing host to a Pump Up Your Book blog tour featuring a work that came to light well after the author passing and yet is making an impact nonetheless.  It reminds me of the storybooks of old, similar to those scenes in older Disney films that began with the opening of an ornate book, in both design and voice; a small fact that lends it a LARGE amount of charm.  Curious?  you should be.  It's definitely one I can see added to many a reader's shelf, but I digress.  Allow me to introduce it properly.  Today's book of choice and blog tour guest is.... 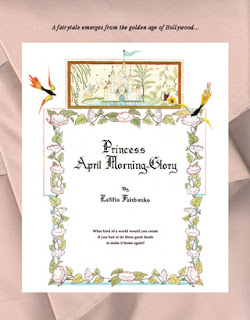 
At long last, Princess April Morning-Glory emerges as a lost treasure from the golden age of Hollywood.

Written and illustrated in 1941 by Letitia Fairbanks, the niece of silent film stars Douglas Fairbanks Sr. and Mary Pickford, the seemingly traditional children’s book is transformed into a modern-day fairy tale that will captivate child and adult readers alike.

Letitia was inspired to create portraiture for the characters of Princess April Morning-Glory from film stars of the day. John Barrymore, and Letitia's cousin Douglas Fairbanks Jr., provided glamorous inspiration through their then-current films. The Wicked King's (Barrymore) costume was sparked by his role as Louis XV in Irving Thalberg's 1938 Marie Antoinette, while the hairstyle resembles his eponymous role in Archie Mayo's 1931 Svengali. Prince Chivalry was inspired by her cousin's (Fairbanks) sword-fighting role in David O. Selznick's 1937 The Prisoner of Zenda.

Viewed as unconventional when it first debuted – up until then, no one had thought to meld a Disney-like moral tale with a swashbuckling adventure – the story centers on the prescient acknowledgment that we create our destinies by the choices that we make.

The main narrative is focused around the brave and courageous Princess April who must first transcend darkness and evil before she can realize her true potential. Intrigued by the Great World and its sense of adventure, a young Princess April decides to abandon the familiarity of her home in Fairyland and undertake a voyage into the unknown. Once outside the Enchanted Forest, she finds comfort and friendship in the company of various creatures who ensure her safe passage.

But returning home proves more difficult than at first she realized. In order to go back to Fairyland, a friendly wizard informs Princess April that she must first accomplish three good deeds. Can Princess April resist the temptation of darker forces and summon enough courage to continue doing good deeds? And if she dares to hold true to herself, will it someday lead her back home again?

There's no way really to describe this one except enchanting.  As I previously stated, the actual layout of the book in both text and image really put me in an "old school" frame of mind.  Lush illustrations, enchanting characters both big and small, even images to adorn the passages dance across every page.  How it was ever seen as out of its time back in the day, I'm not certain but I can definitely say that I am glad it finally reached the limelight of publication.  You don't often see this type of work, this quality and attention to detail in today's releases.  Now, that's not to say that today's literature is lacking anything, it's just a different generation but the nostalgia that this story dredges up with its little fairy princess, an adventure gone awry and emphasis on good deeds warms my heart as I'm sure it will for readers far and wide.

Regarding the history of the author, I truly didn't know much about her except a vague recollection of the name itself.  It took a walk down history lane at the end of the book to brighten that dim corner of my mind.  I must say, Ms. Fairbanks was not your typical woman of her day but hats off to her for her ideas, independent streak and her fortitude to carry through the rough waters that were often presented to her.  The refuge she took in Princess April's story played well in her favor, despite having to wait until present day for the attention it deserves.

In conclusion, a charming tale from yesteryear that's finally having its day in the sun...and I am feeling most favored to be a part of that.  It will leave readers filled to the brim with childish delight while reminding us all that a good deed, no matter how big, no matter how small, goes a long way.  In theses trying times with the world the way that it is, I couldn't think of a better message to impart.  So from my heart to yours, I highly recommend this enchanting read for one and all. 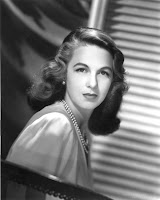 Letitia Fairbanks, the niece of Douglas Fairbanks Sr. and Mary Pickford, lived a life guided by artistic passions. In 1939, wanting to commemorate her late uncle, Letitia began work on Princess April Morning-Glory, allowing a creative outlet for combining her lifelong loves: painting, writing, and illustration.
Holding firm to her artistic identify, Letitia gravitated toward portraiture, landscapes, and still-lifes. She was also a biographer, co-authoring Douglas Fairbanks: The Fourth Musketeer, with Ralph Hancock. Her marriage to Hal Smoot in 1966 marked the beginning of a particularly joyful and creative period. Needle points and annual Christmas cards, which featured a painting from the previous year, not to mention her role as a wife, mother, step-mother and grandmother brought her much fulfillment. After a life rich in artistic accomplishment, Letitia passed away in September of 1992.

Kelley Smoot Garrett was born in Dallas, raised in Manhattan and has lived the life of a West Texas wildcatter as well that of an IT professional. At one time or another in her life she’s called places as diverse as Scourie, Scotland; Austin, Abilene and Midland, Texas; Singapore; Paris; and Auckland, New Zealand — home. She is proud to be the daughter of Sue Ashby and Harold Smoot and the step-daughter of Letitia Fairbanks Smoot. She currently lives with her husband Danny Garrett, three cats, and one happy only-dog, Moxie in the Texas Hill Country.

ARC for review courtesy of Dorothy at Pump Up Your Book Online Book Publicity.  (THANKS!)  For more information on this tour as well as those both past and forth coming, be sure to stop by their official site, friend them on Google+, like them on Facebook or follow along on Twitter.  To discover more of the world within Princess April Morning-Glory, be sure to stop by the official site or like the Facebook page.  This book is available now so be on the look out for it on a bookstore shelf near you.  Now remember, this is a BLOG TOUR so there are LOADS of great stops to check out from beginning (Feb 4th) to end (April 26th), including yesterday's over at Vic's Media Room and tomorrow's at Books Books the Magical Fruit.  Now, are you ready for even MORE fun?  Keep reading...

As a special bonus just for stopping by today (okay, okay...it's also a part of the tour itself, but your stop over here is MOST APPRECIATED!), the folks at Pump Up Your Book are also giving you a chance to enter their giveaway for a Kindle Fire HD!  Old school meets new school, what can you do.  TO ENTER...just fill out the Rafflecopter form below and you're in it to win it.

Until next time, happy reading!

Oh my goodness this looks and sounds like a beautiful read, the kind of book every girl, young and not so young, would adore.

Thank you Insatiable Readers Blog spot for such an outstanding review of Letitia Fairbanks' "Princess April Morning-Glory." It makes our hearts sing to read your words and know that Letitia's message of Doing 3 Good Deeds is making its way around the world, at last!

For your loyal readers looking to explore the themes and imagery of Princess April Morning-Glory I invite all to follow us in one of these many ways:

Get the secrets behind the story, of Letitia Fairbanks' "Princess April Morning-Glory" http://princessapril.com/notes/category/commentary/

Want to receive a special $2-of coupon when you buy a copy of "Princess April Morning-Glory?" Go to our purchase page and follow the details: http://PrincessApril.com/buy/

I let the older man go before me in the checkout line :). I was super nice to the cashier because the person before the older man was REALLY mean to her.