Hi there!
Welcome back to the place that aims to please readers of all ages at some point or another throughout the course of a week....Satisfaction for Insatiable Readers.

Today, we're heading back to the realm of storybooks only this time, it's based on a true story.  Pretty cool, right?  Oh, it only gets better from here on out.  The tale is one that will enchant the hearts of readers young and old as well as capture the attention of art connoisseurs too...of course being a dog lover doesn't hurt either.  ^_^  Curious how this puzzle fits together?  (< - There's a pun there which you'll get in a second...) Wonder no more!  Today's book of choice is.... 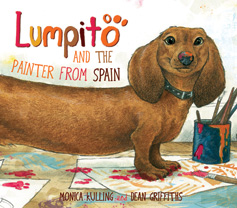 
A true story of the determined little dachshund who stole Picasso’s heart
Lump the dachshund is content living with David in Italy. But he is not happy living with Big Dog, who hounds him day and night. Lump needs a holiday. So when David announces that he’s off to the south of France to photograph a famous painter, Lump positively scrambles at the chance to ride along. At the villa, Pablo Picasso greets them and is enchanted with the little dog he calls Lumpito. The feeling is mutual; from that moment on, the two become soulmates. Lump loves David. But how can he show his master, and Picasso, that he is home at last?


Take two parts ADORABLE, one part fiction, one part truth...mix well and the masterpiece you are about to meet is the end product.

First things first, the name.  It begins as Lump but is pronounced "Loomp", meaning rascal in German and transforms to Lumpito when he finds a new forever home that fits everyone like the missing puzzle piece of a forgotten puzzle.  A great tail...excuse me, tale for readers of all ages that will capture your heart from beginning to end, or even cover to cover;  Lumpito is such a little star that it takes both sides of the cover to display is adorableness or rather for both ends to meet.  ^_^  I have to admit, my instant attraction to this book was the cover...he reminded me greatly of my little fur baby Winston (a doxy who passed away a year or so ago); there's just something about their sweet little faces that really pours on the charm.  The illustrator, Dean Griffiths, really brought that to life from start to finish without neglecting any of the other characters within.  From the paint smudges on Lumpito's nose to Yan's elation at making a new friend, Picasso's obvious joy over his new little muse and so on, there is fun to be had and joy to discover on every page.  So, in essence, I came for the cover but STAYED for the story. 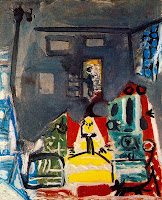 This is not simply a story about man's best friend but rather a journey that finds our lumpy boy in a new forever home better suited for all members of the family.  Any pet owner knows, just because we want two of our fur babies to get along, doesn't mean they always do.  Sometimes, it's just not meant to be and though it's hard, the best thing for everyone is to seek out a new situation for them.  Such was the case presented in this story and such are the circumstances that landed Lumpito with new digs...and also the role of muse to one infamous artist.  That's right.  The tie in to Picasso is all TRUE.  Don't believe me?  Check out some of his work, specifically his series of Las Meninas (The Maids of Honor) paintings, some of which I've included here thanks to online search options.  FIFTEEN of them feature the little pup...how cool is that?!  (Thank you to the author for pointing out this COOL factoid!  Definitely opens up the door for more research after the story!)

So, in conclusion, an adorable story ripped right from the pages of history and presented in a tidy little paint splatters package of furry wonder for all to see.  It will appeal to young readers right from the start with illustrations to adore (and really, who could say no to THAT little face?), while still giving older readers something to capture their interests and investigate after the tale has reached its end.  Another fantastic release, from an author that's certainly made her mark in the Children's Edutainment arena, and one whose work I will recommend (and follow) for many moons to come.This book just celebrated its official BOOK BIRTHDAY this Monday and should be readily available on a bookstore shelf near you.

Review copy received courtesy of author Monica Kulling and Erin at Pajama Press.  (THANKS!)  For more information on this title as well as their complete catalog, stop by the publisher's site, blog, Pinterest board, Facebook page, or follow along on Twitter.  To discover more of the creative world of Monica Kulling, stop by her official site, or like her on Facebook.

I love the cover of this one! It sounds like such a great book and I think the tidbit of information is fascinating. 15 painting! Who knew? I look forward to reading this one and sharing it with others. :)
~Jess

I would love to read this one. Extra special because it's true.

How adorable is this book? It sounds super cute!