Gandhi: A March to the Sea by Alice B. McGinty

Hi guys!
Welcome back to Satisfaction for Insatiable Readers...the place to be when you need a reminder that silence IS in fact a virtue, as is holding your tongue.

Yeah.  Yesterday may have been Monday, but today is ACTING like a Monday.  Whew!  Seriously, job 1 has been full of "surprises" thus far and as this post goes live, it's only just begun.  Cie la vie.  I'm going to take a note of direction from the title I am featuring today that reminds us of the above virtue and also shows us the volumes that silence can speak.  Don't believe me?  No worries...any doubts you have are not hard to imagine actually considering the state of the world today, but allow us to take a look back at an event that sparked conversations and actions with lives spared instead of lost.  Today's book of choice is... 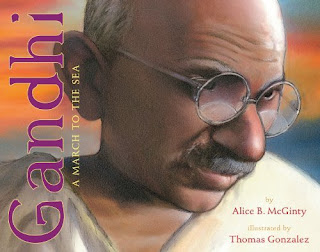 Gandhi:  A March to the Sea
by
Alice B. McGinty
Illustrated by
Thomas Gonzalez


Mohandas Gandhi’s 24-day March to the Sea, from March 12 to April 5, 1930, was a pivotal moment in India’s quest to become an independent country no longer ruled by Great Britain. With over 70 marchers, Gandhi walked from his hometown near Ahmedabad to the seacoast near Dandi. The march was a non-violent means to protest the taxes that Great Britain had imposed on salt-not the salt that the Indians could get from the sea, but the salt that Great Britain forced them to buy. Gandhi believed that peaceful protests were an effective way to challenge British law, and his peaceful but ultimately successful movement became known as Satyagraha.


It's a storybook detailing what began as one man's journey and turned into an affair far bigger than himself, a non-violent demonstration...all in the name of freedom; a worthy cause indeed.  His name is recognized near and far for many reasons but today we will focus on this one act, this one march for a country's people to call the shots within their own borders.  It's not a method of protest chosen often in today's world, sad but true, but it does speak volumes without ever having to hear that fateful shot ring out across a land.

Disagreements do not have to end in bloodshed; there is a better way.  When we open the doors to communication and understanding, it creates a welcome environment where compromise and change are friends not foes.  I mean, imagine where we would be today if the world simply sat down and LISTENED to each other in lieu of running first for the heavy artillery and trying to shout past the sound of mortars   The lives spared, the lands saved, the harmony achieved would bring about a peaceful planet indeed...in my opinion at least.  Suffice it to say that this work while documenting a historical event in verse, will leave you with aspirations of creating your own utopia in the here and now.  Moving forward... 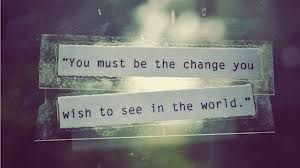 For those well versed in the works of author Carmen Agra Deedy, the illustrations in this book may ring a few bells.  Recall for a moment her work entitled, 14 Cows for America....have it pictured in your mind's eye?  Good.  Now, compare the images.  Look familiar?  The painted illustrations are were created by the same hand, Mr. Thomas Gonzalez.  Personally I think they fit well with the open verse style of the writing featured here.  They give you the images so you have a starting point but only so much detail so that as you are reading you can sharpen the softer  points with the text.  It's quite the "marriage" of words and images; definitely worth more than a quick glance.

In summary, I would say this is a bite sized history lesson great for readers of all ages with a little something more.  You'll not only walk away with new found knowledge (or a refreshed memory if you were already well versed in these events) but also an appreciation for a people's non-violent quest for a better life and a respect for the actions taken in peace.  Of course, the inclusion of those wonderful illustrations add yet another facet of wonder to entice the eyes of readers young and old...just try turning a page without gazing at the images before you.  From a simple sunrise to a nation gathering together for a cause, the intricate details of their ethnic costumes to a handful of salt; each one was created with care and made to be marveled at.  Enjoy it as it was meant to be enjoyed.

This title was released this April via Two Lions, an imprint of Amazon Publishing, and should be available now at a retailer near you.   Need a start in the right direction?  No worries...happy to help; Amazon, Books-a-Million, Barnes and Noble, and Indiebound. Special thanks to Deborah at Amazon Children's Publishing for the review copy.  (THANKS!)  For more information, be sure to stop by their website to discover all of their imprints, as well as current and forth coming titles.

Interesting. I wouldn't mind trying this one.