The 13-Story Treehouse by Andy Griffiths

Hi there!
Welcome back to the place that aims to please the reader in you most days of the week...Satisfaction for Insatiable Readers.  Why most days?  I thought you might catch that change in phrase.  Mainly because there are some days that the blog may be silent but I try to keep that few and far between.  You know how it goes guys....sometimes you need a mini-break.  No worries...not quitting anytime soon though.  ^_^  Moving forward... 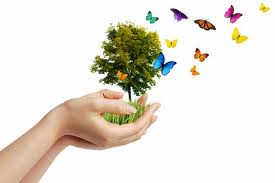 Today, if you haven't heard as of yet, is EARTH DAY!  The day that we celebrate all things about Mother Earth and the conservation efforts in process and forth coming to keep her clean,. energy efficient and viable for many many many many (you get the picture) moons to come.  How are YOU celebrating Earth Day?  Me...I'll be working mostly, but also squeezing in a little reading from both a paper book that I'll be recycling in the form of sharing with a friend (or perhaps one of you...we'll see) and an ebook with only a digital impact to the environment.  Oh, and I'll also be sharing an awesome little read that I just devoured yesterday starring a writing duo that lives in a TREEHOUSE.  Trust me though, this is not your standard old house stuck up in a tree...it's the tree itself AND THEN SOME.  Curious to explore this "natural" wonder?  Let's go!  Today's book of choice is... 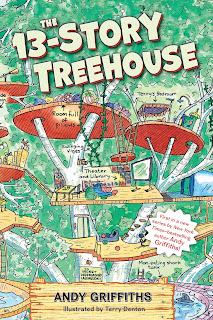 The 13-Story Treehouse
by
Andy Griffiths
Illustrated by
Terry Denton

What starts out as a day in the life of two young lads living in the uber-awesome treehouse of anyone's dreams, morphs into a race to meet their publisher's deadline and ends in an adventure so wild, so crazy, so catnary-flying-in-the-clear-blue-sky...you have to read it to believe it.  No, really...and there ARE catnaries - cats that are now yellow and can fly.  *-*

I started the book on a whim as I was eating dinner yesterday and simply couldn't put it down.  It's set up "Wimpy Kid" or "Dork Diary" style meaning less on the words, more on the artwork but both pieces depend equally on each other for the story to be told.  With the turn of a page, you're whisked inside the treehouse that appears from the outside to simply be a ginormous tree, free to explore the multi-story structure complete with a bowling alley, a room full of pillows, a theater, a library, and....a secret underground laboratory where random acts of genius (and not) are carried out on a daily basis.  Yes, there is fun to be had and fun that has been had but there was also a deadline forgotten and Mr. Big Nose their publisher is none too happy.  Any authors out there know that feeling?

To squelch the anger of Mr. Big Nose and prevent his nose from getting any redder or bigger than it already is, they agree to have their latest book to them by 5PM the following day.  Now they only need to focus and get some ideas down on paper, and they actually might make the deadline.  Too bad the distractions are aplenty and the boys have a somewhat "who-look-shiny" problem at the moment.  Everything from a ray gun that will shrink or grow things (including a ginormous banana...which both helps them later on and lands them in trouble), an obsession with sea-monkeys (which definitely turn out to be MORE than expected), and the desire to help a kitty-cat fly (enter the catnary...told you there was one...err, multiple!) will play its part in distracting this team from getting down to brass tacks.  The why and how of the parts they play though is HI-larious; the stuff that books are made of even!  (Hmmm....) 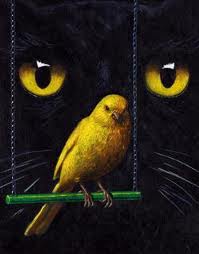 The cast of characters encountered varies, if you haven't guessed that as of yet.  From the cat turned catnary to the sea-monkeys, from a sea-monster to a GIANT gorilla, and a little bit of everything in between, you've definitely got your plate full here...but that's not even mentioning our leads, Andy and Terry (wait a second, aren't those the names of the author and illustrator?  *-*).  Andy is the writer of the duo; Terry is the illustrator.  Though each would like to claim the title of the other as well, a contest between the two revealed in the story nets the true winners.  You'll laugh along with their antics, make their worries your own (temporarily speaking of course) and while away a piece of your afternoon as you read all about them rushing to meet their publisher's deadline...only after having a few more adventures that put off the inevitable.  ^_^  Good times indeed.

In conclusion, a great way to insert a reading break in your day and something that will definitely keep your imagination running in tip top order.  Though a work of fiction (supposedly) aimed at children (to start with), the creativity employed (in my opinion) will attract a wider range of readers....even if only to satisfy their curiosity.  The way the story wraps around on itself is another stunning point you have to read to see (or is that see to read?) and again begs the reader to ponder just how much of this work was fiction...versus fact.  I'm told this is the lead book in a new series by this formidable team well known in the Children's Literature arena and if this is any indication of the fun yet to come, I'm sure we'll be hearing much more about Andy and Terry very soon.

ARC courtesy of Ksenia at MacMillan Children's Publishing Group. (THANKS!)  For more information on website, like them on Facebook, or follow along on Twitter.  To discover more of the worlds in Any Griffiths head, check out his site, Facebook page, or Twitter feed.  Curious about the illustrations?  Terry Denton can be found online at his official site.  This book was released this month via Feiwel & Friends, so be on the lookout for it on a bookstore shelf near you.this title as well as their ever growing catalog of wonders, be sure to visit their official

Sounds like a blast. I want a tour of that treehouse too. :)

Loving what sounded like a fun cast of characters. As a girl I always wanted a treehouse.