End of Summer Blog Tour: Holiday in the Hamptons by Sarah Morgan 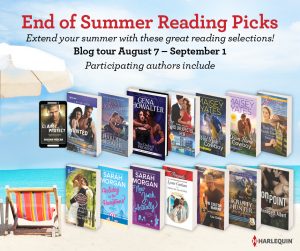 Today, we're joining the TLC Book Tours and Harlequin FUN as we celebrate the upcoming change in season in true bookish fashion.  Yes, that's right.  It's the END OF SUMMER BLOG TOUR! We've got all the thrills (they don't call it "falling in love" for nothing!), chills (keep those temperatures soaring into the night!), and spills (let's face it, love can be messy!), you need to send the season off with a BANG!

For today's post, we're diving between the pages of the FIFTH installment of the From Manhattan with Love series by none other than Sarah Morgan!  If you haven't discovered her amazing work as of yet, it's high time you do...and while I'm a firm believer in starting a series from the start, this is one of those that you CAN pick up anywhere along the way and still be just as swept away.  So, if you're ready, the convertible is ready and waiting to whisk you away for a summer you won't soon forget!  Today's book of choice is... 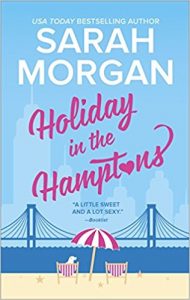 About the book...
The perfect summer escape?

Professional dog-walker Felicity Knight loves everything about New York…until her ex-husband starts working at her local vet clinic. She hasn’t seen Seth Carlyle in ten years, but one glimpse of him—too gorgeous, and still too good for her—and Fliss’s heart hurts like their whirlwind marriage ended yesterday. So when her grandmother in the Hamptons needs help for the summer, it seems the ideal way to escape her past.

Their relationship might have lasted only a few scorching months, but vet Seth knows Fliss—if she’s run away to the Hamptons, it’s because she still feels their connection and it terrifies her. He let her go once before, when he didn’t know any better, but not this summer! With the help of his adorable dog, Lulu, and a sprinkling of beachside magic, Seth is determined to make Fliss see that he’s never stopped loving her…

This is the story of Fliss and Seth...what was, has been, and might be.  Once upon a time, they fell madly in love and though their teenage hearts beat true, their pasts colored their futures and what might have been happily-ever-after turned into a nightmare neither could cope with.  It's true what they say, communication is one of the keys to a successful relationship and while physically they spoke volumes, mentally they weren't on the same page.  Flash forward ten long lonely years and let's just say that the potential for awkwardness is there in spades.  How does one handle THAT meeting?  In Fliss' case, she doesn't...avoidance is her tactic and she's sticking to it...at least, she's gonna try to, but it seems as much as she curses the fates, they have a new ending in mind for her story and while HEAs are favored, sometimes they need a little attitude to make it fit just right.

At first, I wasn't as involved in this story.  I know, it shocked the hey out of me too....however, once the ball got rolling, the deception started, and I realized that not only was Seth not as bad as I had him pegged from his cameo in 'New York, Actually', but he was pretty darn smart too, I was reading with new eyes.  Fliss is a unique character in that she takes no prisoners in pretty much anything she does and her protective streak runs straight to her marrow.  True, it started in childhood as a way to combat her father (don't even get me started on that man!), but in adulthood, it's her way of showing how much she cares. The fact that she couldn't apply that same fierceness to her own heart hurt MY heart...but I had a feeling she'd find her way.  Seth is truly one of the good guys.  No, here's not perfect...as witnessed by that scene in his new home where the words "goodbye" were uttered (bonehead!)...but he's come to terms with what he wants in life and won't stop until she realizes that it's her.  Seeing how in tune they were with each other despite the years that have passed warmed my heart, as did his patient pursuit of her as he sidestepped her defenses without her guard ever realizing. 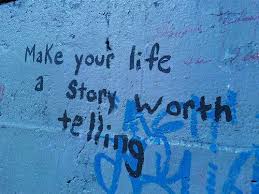 All in all, it was a wonderful trip to the Hamptons with characters you won't easily forget.  The story was filled with personal discovery, and understanding of both the mind and the heart.  When the final page is turned, we are left with the knowledge that while showing our true selves can be scary, it's the only way to build those bonds that last, and discover the love that was meant to be.  Recommended for adult Contemporary Romance fans for a bit of steaminess and spark. 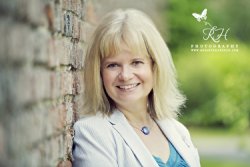 Special thanks to Lisa at TLC Book Tours and HQN Books for the chance to bring this review to you as well as the ARC.  (THANKS!)  For more information on this title, the author, the publisher, or those tours on the horizon, feel free to click through the links provided above.  This title is available NOW, so be on the lookout for it on a bookstore shelf or virtual retailer of your choosing.  Be sure to check out the stops along the TLC Book Tours promotion in the blogosphere as we speak.

I'm glad you enjoyed this latest addition to the series! Thanks for being a part of the tour!