Hi there!
Welcome back to Satisfaction for Insatiable Readers.
Today, I'm pleased as punch to bring you a pre-pub look at the FINAL release in The Vault of Dreamers trilogy by none other than Caragh M. O'Brien...and if that wasn't swell enough, I also had the chance to interview her, so, yeah...fangirl moment!  *ahem*  Anyway, where was I...oh, yes....the beginning.

So, there area many series, trilogies and the like, that you can pick up anywhere in the set and be perfectly good.  You'll understand everything, the characters will be three dimensional, and the plot is as delectable as a fresh slice of pie.  Okay, stop dreaming about the pie because although this book is WONDERFUL, FABULOUS, EXTRAORDINARY even, my firm belief is this....YOU MUST READ THE PRECEDING WORKS FIRST!  Though it could be simply my own preference, it's not...this is ONE INTENSE READ and if you don't have the others under your belt first, I'm afraid that while yes, you'll enjoy it...it just won't make as much sense or have as large of an impact on you.  So, heed my warning like fire and darkness monster does to Gandalf the Grey in LOTR...or rather not because it doesn't actually listen....READ THE OTHER BOOKS FIRST, then join the club as "one of us" for this fabulous read.

Okay, done with the soapbox for now.  Let's get to the GOOD STUFF!  Today's book of choice is... 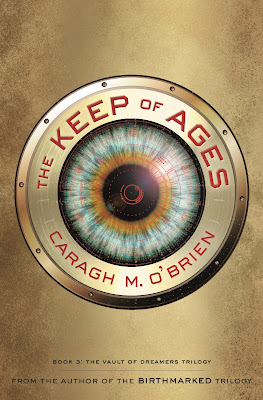 About the book...
In the fast-paced, high-stakes conclusion to Caragh M. O'Brien's Vault of Dreamers trilogy, Rosie travels to a derelict theme park to shut down dream mining once and for all.

Driven by fear when Dean Berg kidnaps her family, Rosie Sinclair strikes out across the country to rescue them. When an elusive trail leads her to Grisly Valley, the contaminated ruin of a horror theme park, Rosie has to consider that Berg may once again be manipulating her every move to make her fearful, priming her for a final, lethal dream mining procedure. As Rosie struggles to outmaneuver Berg, she unearths the ultimate vault of dreamers and the hint of a consciousness more powerful and dangerous than any she's imagined before. Faced with unspeakable suffering and otherworldly beauty, Rosie must discover how to trust her mind, her friends, and reality itself.

Propulsive and deeply speculative, The Keep of Ages concludes the Vault of Dreamers trilogy with stirring possibilities for what it means to be alive.

So much has happened and yet there is so much still to come.
It felt great to catch up with everyone...like seeing old friends (and enemies) that you've missed dearly (or haven't in the case of the enemies). Burnham and Rosie reached a middle ground (not really, but I'm not gonna call them on it), the Linus connection is still tentative and as yet to be determined if it's worth saving, Peggy (her old neighbor) is a great new introduction (that woman ROCKS!), and Ian's appearance just proves that it's hard to keep a BAD SEED down.  (~shudders~ such a creepy character!)  Now about this impromptu Las Vegas trip...

I couldn't believe my eyes...a road trip?  Now?  Why?  Haven't we done ENOUGH running to and from things and places?  Apparently not, and the running only gets more dangerous, treacherous, and any other bad version of "ous" that you can think of because the stakes have grown SO HIGH, and Berg has become so desperate that anything, and I do mean ANYTHING is possible...for better (not likely) or worse (much more likely).  The places we see, the people we meet, and the inner strengths revealed really push this story to its limits while taking readers right along for the ride.  The whole "invasion of the body snatchers" theory is crazy with a capital "C", but think about it a moment...do you think it's possible?  I mean, technology is constantly evolving, who's to say?  I, for one, would...not be interested in the least, thank you very much, conversation over before it has begun.  Just, no...but for Rosie, it's not quite that simple.  What's done is done and whether it was against her wishes or not, something has changed in her, in others, and it affects them all.  What's a girl to do?  What indeed...

What's that?  Oh, you thought I was going somewhere with that sentence.  Like I was actually going to tell you what happens?  HA!  Nope.  Nice try though, really.

In the end, my initial reaction was this...Holy mother of pearl that was INTENSE! So many moments of terror, heartache, uncertainty, bewilderment, and absolute awe.  ...and I stand by that assessment.  It truly was a great conclusion to what has been an AMAZING trilogy.  If you haven't embarked on your journey through the pages as of yet, I highly suggest you do...and as of August 29th, you won't have to wait for the nest release!  All three...right there at your fingertips!  ^-^

Now, I know I've bent your ear a bit, but there's more excitement to share!  Remember that mention of an AUTHOR INTERVIEW at the start of this post?  Guess what?  It's time for it!  RIGHT NOW!  Yep...so, put your hands together for author Caragh M. O'Brien!

1.)  Congratulations on the upcoming release!  It must be SO exciting to finally see Rosie's story reach its grand finale.  I know I'm excited!  However, there are bound to be some out there that haven't yet discovered the wonders of The Vault of Dreamers (*GASP*) trilogy.  CHALLENGE!  If you had to sum it up in TEN WORDS or less, what would you say?

First of all, Gina, let me say thank you so much for having me by Satisfaction for Insatiable Readers! You’ve been such a great supporter of the Vault of Dreamers series, and I’m so grateful! So, how to summarize this series. Here goes:

Girl, mined for her dreams, seeks truth, belonging, and revenge.

2.)  Now, let's get personal with your work.  Of the characters we've met (and will meet in this installment) in the trilogy...
...who is dearest to your heart? Rosie. She’s unlike any other character I’ve ever known, fierce and perceptive, loyal and visionary, vulnerable and brave. The way she takes on her problems and grows feels very real to me, and I love spending time in her mind.
...who was most difficult to write? A certain bad guy, Ian Cowles, has a creepy, loathsome quality that intrigued and repulsed me, and I was always glad to get away from him when I could.  ~shudders~ SO did not like that guy...almost as much as Berg!
...who would you like to meet in real life? I would like to meet Arself, an important new character in The Keep of Ages, but I can’t explain why without spoiling the story. I’ll just say she’s very different.  Oh yeah, I TOTALLY agree!  I loved her, then not so much, then loved again, and...it was a very trying relationship.

3.)  If there was one thing you could be certain readers would take away with them after finishing this trilogy, what would it be and why?

For me, this series has been about creativity and taking risks. By the end, it has made me ponder what it means to be alive. I hope readers take away a sense of how unique we are, and how lucky we all are to exist.


4.)  They say the best writers start out as avid readers.  Where you a bookish child, yourself?  Did you find your way to the pages later in life?  Perhaps you're the rarer breed that skipped it altogether.  Do tell!

I’ve been a book lover all along, starting with Dr. Seuss and cruising through Laura Ingalls Wilder and Anne of Green Gables. (Incidentally, have you seen the latest adaptation? Anne with an E on Netflix is really good.) Ooh...I have not!  *adds to watch list*

These days I enjoy a mix of MG, YA, and adult fiction, with Baker’s Orphan Train as my latest favorite.


5.)  A little quid pro quo.  I say FAVORITE...you say the first thing that comes to mind.  Favorite...
...song? “Sweet Baby James” by James Taylor. I can play it on my ukulele.
...food? Chocolate. Was there ever any doubt?
...season? Summer.  So hot (here) though!
...color? Blue-green
...book (of late)? I’m currently reading Sullivan’s Midnight at the Bright Ideas Bookstore and enjoying it quite a bit.  Ooh....this sounds interesting!
...thing about writing? Disappearing.
...pastime outside of writing? Hanging with my family.  Ditto!


6.)  As we bid you a fond farewell (and MANY THANKS for taking the time to chat with us today!), any final thoughts, ramblings, or words of wisdom from you to our audience?

You tempt me to ramble? Ha! I would just like to add how thankful I am to my readers and to bloggers like you who take the time to spread the word about Rosie’s story. I keep hearing from people who have just discovered it, which makes me really happy. I feel like the release of the final book is, in a way, a new launch of the entire series, but it’s a kind of secret launch, without the big fanfare, because now we have the people who care deeply about the story who are telling their friends, one by one, you have to read this. To me, that’s really special and powerful. That’s what makes me unbelievably grateful.

Thanks again, Gina, for having me by!
No, THANK YOU for this amazing interview...and the trilogy!  ^_^

Caragh M. O’Brien is the author of the BIRTHMARKED trilogy and THE VAULT OF DREAMERS series, both from Macmillan/Roaring Brook Press. Born in St. Paul, Minnesota, Ms. O’Brien was educated at Williams College and earned her MA in the Writing Seminars from Johns Hopkins University. Her young adult science fiction has been honored by the YALSA Best Fiction for Young Adults, the Amelia Bloomer Award, the Junior Library Guild, and numerous state reading lists. A former high school English teacher, she now writes young adult novels full time from her home in rural Connecticut.

Special thanks to Brittany at MacMillan Publishers, Casey at Media Masters Publicity, and author Caragh M. O'Brien for the ARC for review, the opportunity to connect with the author, and for answering my unending stream of questions!  (THANKS GUYS!)  For more information on this title, the trilogy, the author, the publisher, or those promotions on the horizon, feel free to click through the links provided above.  This title is set to release AUGUST 29th, 2017 via Roaring Brook Press, an imprint of MacMillan Publishers, so mark your calendar or pre-order your copy today!