Unexpectedly Hers by Jamie Beck

Today, we're joining PR by the Book as we bring you into the fold of the Sterling Canyon series by author Jamie Beck.  It's the third release, but my first experience with it, and just what did I think?  Well, a little of this and a little of that, but let's not be rude.  Introductions come first for a reason!  Ready or not, here comes today's book of choice... 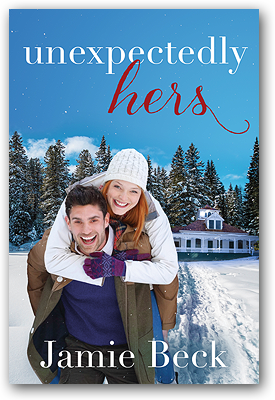 But Emma’s real life is about to heat up when her mother books the entire inn to a professional snowboarder, hoping the publicity will put them on the map. In a karmic twist of fate, that guest is Wyatt Lawson, the man with whom Emma had shared the secret one-night stand that became the inspiration for her novel and its dreamy hero. Worse, a film crew is documenting his comeback just as her debut is about to hit the shelves. Emma’s only saving grace is that Wyatt doesn’t remember her—and hopefully he never will.

When Wyatt arrives in Sterling Canyon for several weeks of intense training, the last tumble he expects to take is falling for a girl, especially one as shy as Emma. Unlike groupies with their hidden agendas, she isn’t using him—or so he believes…until the film crew uncovers Emma’s pen name and steamy novel.

Wyatt’s comeback run can withstand a fall or two, but can his heart recover from this crash and burn?

It was liberating to see Emma let loose and be herself, even if it started as a one night experiment and she didn't always want to expose that side of her heart to potential retribution.  I totally get Emma's dilemma. Being *good* is great but every girl wants to be remembered for/as something more.  Whether it's a great dancer, a snazzy dresser, a kick-butt soccer player, a cooking diva, or "insert-your-passion-here"...we all want to be seen as more than what's on the surface, what the world perceives at a glance...problem is?  The only way for that to happen is to SHOW THE WORLD WHO WE ARE.  Talk about a great message beneath all the flirty remarks, and snow flying fun.

In the end, I can't say I'm in love with the entirety of story, as I actually had a hard time wrapping my mind around these two characters as anything but a passing fancy, but it definitely had its moments. Emma is a quirky leading lady, while Wyatt is Mr-Hot-Stuff-that-might-be-rethinking-his-life-plan.  When the two interact, it can go from sub zero to who-turned-the-heat-on in a hurry, but the magic really happens when their hearts finally align.  ALSO...pay attention to the supporting characters, Ryder, Mari, Adam, and so on, because they really help MAKE the story; no lie.

Jamie Beck is a former attorney with a passion for inventing realistic and heartwarming stories about love and redemption, including her popular St. James and Sterling Canyon series. In addition to writing novels, she also enjoys dancing around the kitchen while cooking, and hitting the slopes in Vermont and Utah. Above all, she is a grateful wife and mother to a very patient, supportive family.

Special thanks to Paxton at PR by the Book and Montlake Romance for the ARC for review.  (THANKS!)  For more information on this title, the author, the publisher, or the promotion team, feel free to click through the links provided above.  This title celebrated its book birthday earlier this year via Montlake Romance, but STAYED TUNED as the author has a NEW RELEASE coming AUGUST 22nd entitled Before I Knew...and we'll be reviewing it right here on the site next week!

This is probably not my kind of book haha.😂 But I'm glad you enjoyed some of it! It's always a shame when the romance isn't really shippable because it doesn't seem like the characters will stay together. I totally get that. Yay for a good supporting cast though!