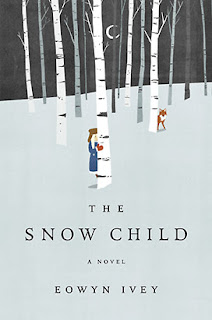 How could she speak her surprise?  Such delicate features, formed by his calloused hands, a glimpse at his longing.
-- pg 44, The Snow Child by Eowyn Ivey

This is a rather unique story thus far in the fact that it's not "fast paced" by any means and yet still incredibly sweeping with its narrative.  You'll feel whisked away to the barren North.  Delight in the smiles that creep their way into the daily bleakness and wallow (though not for TOO long) in the heaviness within their hearts.  I'm quite curious where the story is going to go actually and have high hopes for its progression.  Curious about this newly released title?  Click HERE for more details from the publisher's site...and STAY TUNED because their just might be another post today you'll DEFINITELY want in on.  How so?  You'll see.  ^_^
~~~~~~~~~~~~~~~~~~~~~~~~~~~~~~~~~~~~~~~~~~~~~~~

O goodness I love this teaser. So tender.