Welcome back to Satisfaction for Insatiable Readers...the place to be when you're in the mood for a bookish treat ANY day of the week.  We're keeping things going strong this week with another new reading suggestion that's got an interesting twist.  How so?  Well, you see there was a fragrance created JUST for this book....that's right, a book scent if you will.  How cool is that?!  Pretty cool in my book....anywho, moving on...

Today we welcome via Meryl L. Moss Media Relations, Inc The Book of Lost Fragrances blog tour!  Perhaps you've heard of it?  If not....here's a quick synopsis to feed your curiosity.... 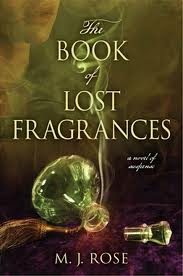 Jac L'Etoile has always been haunted by the past, her memories infused with the exotic scents that she grew up surrounded by as the heir to a storied French perfume company. In order to flee the pain of those remembrances--and of her mother's suicide--she moved to America. Now, fourteen years later she and her brother have inherited the company along with its financial problems. But when Robbie hints at an earth-shattering discovery in the family archives and then suddenly goes missing--leaving a dead body in his wake--Jac is plunged into a world she thought she'd left behind. Back in Paris to investigate her brother's disappearance, Jac becomes haunted by the legend the House of L'Etoile has been espousing since 1799. Is there a scent that can unlock the mystery of reincarnation - or is it just another dream-infused perfume?

Curious, is it not?
As a part of the tour, I've been granted a few privileges that I get to pass on to all of you.  First, a special excerpt from the book.  Ready?  Here it comes....

Excerpt from The Book of Lost Fragrances....

Frustrated, he exhaled and inadvertently blew his candle out.

It must have been all the deep breaths, or perhaps the pervasive darkness. Maybe it was the stale air that made him so dizzy. It didn’t matter. As he battled the vertigo, his awareness of the scent becamemore powerful, more intimate. Finally, he began to identify specific ingredients. Frankincense and myrrh, blue lotus and almond oil. All popular in Egyptian fragrances and incenses. But there was something else, elusive and just beyond his reach.

Standing alone, in the dark, he was so deep in concentration he didn’t hear the footsteps of the rest of the party as they came closer.

The voice startled the perfumer. He turned to Napoléon, who’d just entered the inner chamber.

Mmm...I can almost smell the intoxicating vapors myself, can't you?
When I heard about the book, I couldn't resist asking where the inspiration for the story came from....and as luck would have it, the author graciously answered that very question!

What Inspired The Book of Lost Fragrances?
﻿ ﻿

I was reading Cleopatra (69 BCE to 30BCE), who was the last pharaoh of Ancient Egypt, and found she was fascinated with and some say obsessed by scent. Marc Anthony built her a fragrance factory where he planted now extinct flora and fauna including groves of balsam trees  (important in the creation of perfume at the time) confiscated from Herod.

In the 1980s a team of Italian and Israeli archaeologists believe they unearthed the factory at the south end of the Dead Sea, 30 km from Ein Gedi. Residues of ancient perfumes along with seats where customers received beauty treatments were found there.

Cleopatra was said to have kept a recipe book for her perfumes, entitled Cleopatra gynaeciarum libri. The book has been described in writings by historians Dioscorides, Homer and Pliny the Elder. No known copy of the book exists today.

When I read about that book, I knew I had the idea for a new novel. 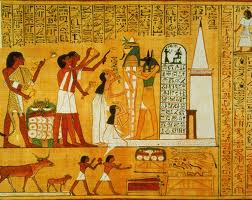 Now see, even though I'm not a history buff per se, I always loved stories of Egypt; their customs, lives, and beliefs.  Guess it goes to show that one never knows where inspiration will come from!

Now, this is just one of many stops along the old blogosphere tour, and as I understand it, there's a SCAVENGER HUNT going on as well!  Next stop, right here ---> http://www.psychoticstate.net/

Good luck on the hunt!

Special thanks to Lindsay and Kate at Meryl L. Moss Media Relations, Inc for the opportunity to participate in this tour. (THANKS!) For more information on this event as well as their other happenings, check them out online at site A and site B.

Sounds interesting! The mystery has a great hook, and using scents as a major device in a book is pretty original. Cool!

On my wish list. I've seen several different covers but this is the first time as far as I can remember that I've seen this particular one.