Welcome back to Satisfaction for Insatiable Readers….the place where even if the blogger is tired, the bookish beat goes on and on and on and ….*YAWN*…oh, sorry!  Long night.  Anywho…

Today we’re taking a look at a new-ish title to the Young Adult literary arena.  It features a young girl with an uncertain heart, a mysterious find, a potential love triangle and a good dose of Celtic lore.  Intrigued?  I thought you might be.  Here’s a bit more to capture your interest…. 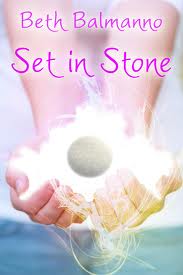 Fifteen year-old Valerie is used to losing things–she lost her dad to his job ages ago and her best friend moved with no warning...and hasn't been heard from since. During a weekend camping trip with her emotionally distant parents, she stumbles upon a hidden, mysterious stone and she finds herself desperate to keep it, to possess it. Two strange and beautiful boys have other plans, however. They follow her home–Leo, warm and seductive, who covets the stone and will stop at nothing to get it; and Noel, dark-haired and wise, who pledges to protect her and keep her safe.

As she delves deeper into the magic of the stone and the Celtic lore that surrounds it, Valerie realizes that she's losing. Again. But this loss might involve more than a magical stone – this time, she just might lose her heart.

Good stuff, right?
You know it, or rather we both will once I’ve had a chance to read it fully which may be a bit (more on that later), however my lack of free time has never stood in the way of sharing my reading finds with you before and this shan’t be the first occurrence. What does that boil down to?  A guest post of course!

I was curious to know more about the book, but also about the author.  You see, just as no two adventures in reading are the same neither are the paths to author-dom taken by writers…or the steps taken to find their “voice”.  When left to her own devices on what to share, THAT is the journey Ms. Balmanno choice to reveal…and what an interesting and fun filled read it was.  Don’t believe me?  See for yourself….

When I decided I wanted to be a real, honest-to-goodness writer, I toyed with what genre to write.  I mean, I read pretty much everything on the shelves so I really thought the sky was the limit on the production side of things.  Chick lit like Bridget Jones Diary?  Perfect.  Super crime thrillers like the ones James Patterson writes?  No problemo.  Literary fiction a la The Secret Life of Bees?  I'm ON it.

But there was one problem.

Fact is, my writing voice never matured much beyond age sixteen.  Oh, sure, my writing skill and style have (dear God, at least I hope they have...) but that voice that propels the story, that voice that takes control of my fingers and my mind and gets the words out?  Yeah, she's sixteen.

But I didn't know that.  So when I sat down for that very first time to write, I attempted a novel for adults.  The premise was awesome—a guy holding the alchemist secrets of Count St. Germain...a secret that prevented him from being with the woman he loved.

It sucked.  Like douse-it-with-gasoline-and-toss-it-in-the-fire sucked. My writing group and friends tried to be as nice as possible but there honestly was nothing good to say about it.  Except maybe the premise.  I sat and stewed and sobbed—a lot—because I was convinced I'd never write anything good.

And then I had a dream.  One of those dreams where it's you but it really isn't and you shift from 1st person to 3rd and it's crazy and wild and unbelievably real.  And in it, I was a teenager.  And there were two boys and one was warm and beautiful and the other was cool and gorgeous and they both wanted me.  I knew when I woke up that I wanted to write about them.  And about me—I mean, her.

I had no idea what the story was but I knew the characters.  And for once, I didn't have to think about how to write or what to write.  Valerie's voice spoke to me loud and clear.  I was the conduit she needed to tell her story...to me and to a larger audience.  I pounded out a 100K word first draft in three months.  I woke up at 5 am so I could write before my kids got up. I got really good at multi-tasking (have you ever tried nursing a toddler while typing??) I carried a notebook with me everywhere.  Valerie would not shut up.

When I typed the last words to that story, I knew I had something special. No, I'm not saying Set in Stone is the next Harry Potter or Hunger Games.  It was something better...at least for me.

I had a book that had a voice.

Yes, it was the voice of a teenager.  A slightly angst-ridden teenage girl dealing with all sorts of real issues and a fair amount of fantastical ones.  It didn't matter that I'd left my teen years behind almost — gulp—two decades ago.  What mattered was that I had finally found a voice for my writing.

A voice that made me a real, honest-to-goodness author.

Want a chance to win a Kindle copy of Set In Stone?  Good—'cuz I wanna give one to you!  [Read on….]

Yup, that’s right!
After that AMAZING post….oh come on, admit it….you were hanging on every word, I know I was and after reading the magic she can work with a true share about herself, I can’t wait to see what she can do literarily speaking, but I digress.  After that AMAZING post, it pains me to say that I….I won’t be featuring this one on the site….well, at least until this Fall.  ^_^  What?  You didn’t think I’d skip this one entirely did you?  Pfft!  I think not!  HOWEVER, I’m not one to restrict you from enjoying a potentially great read in the mean time and thanks to the author, you now have a chance to win a copy of the book to call your own.  Here’s the scoop…. 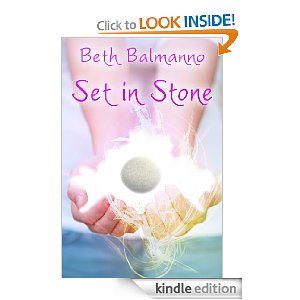 (1)   Kindle edition of Set in Stone by Beth Balmanno

How to enter?
Just submit your info in the form below and PRESTO CHANGEO, you’re in to win!

Rules?
Open to residents of the US, UK, France, Germany, Spain and Italy ….hey, don’t blame the unusual assortment of countries on me, it’s the restrictions Amazon has in place.  Contest ends March 31st at midnight CST.  Winner’s information will be sent to the author for prize send out and then discarded.

So, what are you waiting for?
Get to it! 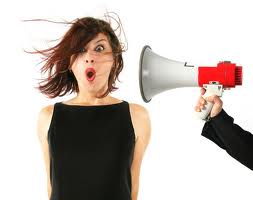 I mean really, if you’re anything like me….you can’t stand to see a good book fly under the radar.  So get your entries in and spread the word about this new YA title near and far.  Shout it from the rooftops if you must!

oh, to have a part of you forever 16! Great interview, I'm away to add this to my wish list as I tend to enjoy anything with a Celtic feel.

I have read Set In Stone by Beth Balmanno and it is really really good! I am hoping there will be a sequel!

This does sound like a wonderful read. And so glad to hear you found your voice. :) It's okay to be 16, you are young at heart. ;D

Great book, great writer. We should all be sixteen again:)

Goodness, I wish my dreams were that interesting! I don't know if I'd want to go bck to sixteen or not, personally.