Hi there!
Welcome back to Satisfaction for Insatiable Readers….the place to be when you’re in the mood for food…for thought that is. 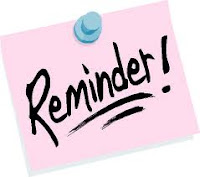 Just a quick reminder of two exciting things we’ve got going right now on the site….first, your chance to win a copy of Finding Our Way Home by Charlaine Ann Baumbich ends 03/23; so don’t delay, get your entries in now!  (It’s easy peasy with plenty of extra options, promise…)  Second, Gone Reading International’s created a special deal JUST for my readers (aka YOU!) with 25% savings off your bookish purchase and when I say bookish I mean bookish.  They have shirts with fun-tastic sayings, books-I’ve-read journals, bookmarks, and even a Jane Austen trivia game!  Be sure to check out all the fun before the code expires.  Just check the “CURRENT CONTESTS” section in the right hand side bar for more details.  Now, on to the post….

Today we direct our gaze at a title from an author team you may recognize, though their TV exploits are even more well known, that’s breaking ground in a new-to-them genre….pretty successfully too.  The story type is one many reserve for the Fall months but I say…what the hay?  Who couldn’t use a good spine tingling read at other times of the year?    Shall we get right to it then?  Let’s!  Today’s book of choice is…. 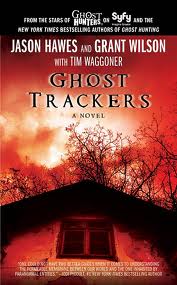 For fifteen years, Amber, Drew, and Trevor have barely been able to recall—let alone explain—what happened the terrifying night they decided to explore the old, abandoned Lowry House.  According to local legend, the house was cursed by a dark past and inhabited by evil.  It burst into flames on the night of their visit, leaving the friends traumatized and nearly dead with only vague memories of the frightening events they had witnessed inside.  Now, on the eve of their high school reunion, they have gathered to reopen their investigation and figure out, once and for all, what took place that fateful night…before the supernatural entity they escaped threatens to overtake them again.

Funny thing about this book….it came up in conversation yesterday.  Okay, so that’s not especially FUNNY per se, but it is ironic just the same that the review was planned for today, no?  Anywho….I had a customer asking for horror books that will really “scare the socks off of you”.  *blink*  Truth be told?  Haven’t ever actually had a book do that to me before…  *-*  …I think it’s something to do with your personality and imagination.  Mine is active (imagination that is), while the former is subdued (personality…what can I say?  I reek of bookishness…) so I suppose they balance each other out where the visuals my mind’s eye creates don’t run away with themselves.  Are they vivid?  Sure…but they don’t generally carry so much foreboding that I can’t sleep after reading a particularly spooky chapter….and I told them as much, however I could DEFINITELY recommend some fine horror/scary story authors for them to check out both from experience and recommendations I’ve received (yep…that means you!) which leads to today’s feature… 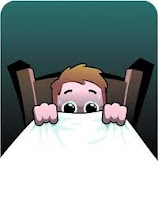 For you scaredy cats out there, there’s no need to hide under the covers….this book isn’t terrifying but it IS down right spooky/creepy and perhaps best read in the daytime, with a strong nightlight, or a great big fluffy puppy (or a tiny one that THINKS they’re the big fluffy type) close at hand.  The authors create an atmosphere of suspense and electricity that sustains itself throughout the book; you’re always on the edge of your seat wondering what or who will be next.  The vengeance carried out seems random at first with small threads of connection forming like the lingering wisps of a spider’s web, but the purpose behind them is revealed in due time with enough details in the meanwhile to keep your attention firmly locked.  Speaking of that vengeance…

Talk about creative minds and just desserts!  No really…each person affected by the darkness unleashed once again in this sleepy little hollow of a town gets to shall we say pay for their acts of indiscretion in very appropriate manners.  They all start simple and straight forward…and then twist into something a bit bigger, a bit menacing and much darker.  They were all original, especially with the way the characters were able to interact with everything, but the one that stuck with me the most was the science lab scene.  You remember labs, right?  Teachers asking you to dissect some little critter or creature for the sake of Science…when perhaps a digital or 3D version might have worked just as nicely?  Well in this scenario gone wrong, they exact their revenge for being used to make a point against a faculty member and fellow student.  ~shudders~  Yep, it’ll certainly make your skin crawl….best not to read while eating either… *-* 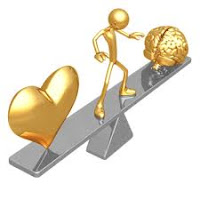 As the story progresses, you get a proper sense of who’s who amongst the group.  From the reunion attendees (that may or may not survive) to the main trio to the shadowy figure yet to be fully revealed, they all make their mark in the story (no matter the length of time they still have left on the page…*dun dun dunnnn*).  Of the three friends, I suppose the one’s I feel we come to know best are Drew and Amber…or perhaps it’s that they’re stories have more feeling to them than Trevor’s.  Though the first is level headed to a fault at times and the second so wound within her mind it’s hard to see where reality ends and feelings begin, they both have a much more emotional reaction to everything going on both now and back then.  Trevor….he approaches it as a believer already, so certain events only serve to confirm what’s already there.  Amber has no room for doubt, especially with her “talents” and yet pushes against its existence every chance she gets.  Drew is more practical and analyzes it all away with science but even he is forced to reconsider when things REALLY start to unravel….

There were really only two “issues” I had with the book that surface for any kind of notice.  First, the story is told from a variety of voices….determining precisely who is speaking though, at times…can be rough.  The transitions between small part characters and the “big nasty darkness” is fairly clear but I think because the trio is so close in heart and action, that their voices tend to blend at times.  A good effect to show their connection yes….but it can cause a stumble or two to keep track of whose eyes we’re seeing through now.  Second and lastly, the ending…not exactly what I was expecting; it was good, don’t get me wrong but I think I was expecting something “more”.  Surprisingly though, after reflecting on the author’s backgrounds with actual paranormal investigation (especially in how they approach it), it makes sense.  I mean, has us expecting otherworldly activity to be all spinning heads and pea soup when in reality, its more bumps in the night and small burst of activity so perhaps the slightly lackluster ending was intentional in order to reflect an “actual” haunting.

﻿ ﻿
All in all, a spooky scary fictitious read that will have you leaving the lights on if not reaching for new socks (you know, to replace the ones that might have been blown off…).  The language is well managed, the gore kept in check, the touchy scenes kept sensual in lieu of something else….all adding up to a recommended read for teens through adults looking for a good scare with heart.  The info page on this book mentions it’s the start of a “new series” so the question begged to be asked, when will the next installment be? Though I’ve nothing official to share, there is the mention of a new book from these authors coming out October 2012 by the name of Ghost Town.  Hmm….I wonder…. *marks calendar for further investigation.

Review copy received courtesy of Melissa at Simon and Schuster.  (THANKS!)  For more information on this title as well as their full catalog, be sure to check out their website, 'like' them on Facebook, or follow along on Twitter.  This book was released the later part of 2011 from Gallery Books and should be available on a bookstore shelf near you.  To discover more about the authors, be sure to check out their other works (one of which was reviewed right here earlier this year) as well as their show on the Syfy channel.

Thanks for another post on the Ghost Hunters, and for the heads-up that they have an adult fiction book out there. I read part of one of their fiction books geared toward a tween audience, but this one looks much better.