Lost and Found by Bill Harley

Hi guys!
Welcome back to the Saturday edition of Satisfaction for Insatiable Readers. It's a quick post today while I'm on the go because, well...we're welcoming a new addition to the family courtesy of our local no kill animal shelter. His name is Rocky and he's a six year old beauty. Slobbery, but so well behaved...and he looks rather handsome in his blue bandanna. ^_^ Anywho...how is this relevant to a book review? It fits much better than you might think.

Today, we are stepping back to the land of Children's Fiction with a storybook from a publisher that knows this genre well...Peachtree Publishers (http://www.peachtree-online.com). It's a story that begs readers to look beyond the surface of things and reconsider the true value of something once lost that's now been found. Ready for the reveal? Let's do this! Today's book of choice is... 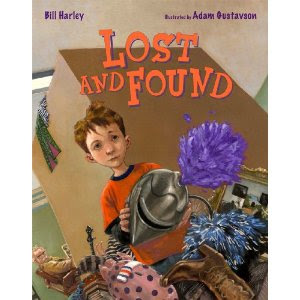 It all begins with a misplaced hat. Justin is the young lad who has misplaced the hat, a gift from his grandmother, and is desperate to find it...but...is he desperate enough? You see, he's asked his
friends, checked with teachers and asked the office all to no avail.  No one's seen it but they know where to suggest he take his search next...the janitor. Why? Well, he's the keeper of the lost and found and where else would a lost item turn up? Problem is...the janitor is not the most approachable person in the world; to put it bluntly, he's downright scary. Is a lost hat really worth facing his fear or will seeing the disappointment in his grandmother's eyes be an acceptable outcome? Decisions decisions...but often times the choices we make lead to unbelievable revelations that can change a life.

Justin is a remarkable young man, especially since despite his trepidation about making the janitor's acquaintance he pushes forward through his fear of the unknown. It takes a lot of guts at that age...but then again he had sufficient motivation; a displeased mother and a disappointed grandparent to avoid. It's nice to see a young man care so much about his family and his belongings; all too often, similar portrayals are the exact opposite. As it turns out, Justin discovers a whole lot more than what he was actually searching for in
both material items, that get a second chance thanks to a new generation, and emotional maturity. It seems that someone else in the family had similar thoughts about a certain janitor once upon a
time...

In the end, you'll thrill at the unexpected treasures found in that chest of chests called the lost and found. Take a moment to marvel as its all brought to life with striking illustrations that appear to be painted works of wonder. Share in the message that judging a book solely by its cover or a person by the passing impression they present is not the way to live a full and rich life...because sometimes, that less then appealing exterior is protecting a treasure untold. You'll never know if you don't give them a chance...

Review copy received courtesy of Peachtree Publishers. (THANKS!) For more information on this title as well as their full catalog, be sure to visit them online, check out their blog, or follow along on Twitter (http://twitter.com/PeachtreePub). This book is available now on a bookstore shelf near you.

Sounds like a sweet read! And school janitors can be a little scary, so I don't blame Justin at all!

Congratulations on the new addition! Rocky is a great name, and I'm hoping you'll post pictures! Rescue dogs are the best! :)