Two are better than one, but three can still be fun...

Hi there!
Welcome back to Satisfaction for Insatiable Readers...the place to be when you're in need of a bookish break...because seriously, there are only so many backwards thinkers you can take before more than your TIME breaks. *-*

Yes, it's been one of THOSE days to a degree but I'm going to take the path of enlightenment and rise above it all...in other words "fake it til you make it" in the real world and spend a little quality time with all of you as the day permits online.  Sounds good to me, how about you?  ^_^  Anywho, the day actually fits quite well with the books I'm featuring, as do my reactions to it both for better and worse.  They are actually book 2 and 3 of a Middle Grade/Young Adult trilogy (book 1 of which I reviewed once upon a time) that definitely stands apart in today's publishing arena.  How so?  Well, it's the story line that really does it.  It's not in the here-and-now, it's not dystopian, it's not paranormal or even fantasy per se.  It harkens back to a time when mankind lived simply, days were filled with the goings on of immediate life as opposed to that of the distant future and the internet was a far cry from existence.  (Whoa...are you okay there?  I think I saw you swoon... ^_^)  It's a change of pace from the usual hubbub and one WELL worth the read.  If you would please, allow me the pleasure of re-introducing you to this series by author Alan Richard Shickman via today's BOOKS of choice.  First up is book two... 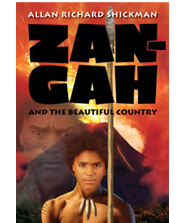 Zan-Gah and the Beautiful Country

In this installment, Zan-Gah and Dael's lives are returning to their normal pace within the Bo-Caro tribe until tragedy touches their world once again.  Dael's wife dies in labor along with his newborn child reigniting the flames of turmoil and destruction within him.  He embarks on a quest to alleviate his pain the best way he knows how...vengeance against the Wasp people that caused him so much harm during his previous captivity.  Little does he know that the angry steps he takes on this fateful day will lead him not to justice and salvation but to imminent destruction of not only himself but all that he cares for.

It's a harrowing tale that really puts Zan-Gah's brother in a new light.  Despite the fact that my description merely makes a passing mention of the kinder brother, he is in fact a key player in this tale.  He's just not as fiery as his brother, though the secrets he harbors and his lack of action will be his undoing to some degree as well.  Hey, no one is perfect but family is family and sticking by each other was big in those times.  In fact, it was often the most of what some families had...too bad this one is crumbling fast.  Lucky for us though because it gives readers a chance to see brotherly love in action as well as responsibility and consequence.

I enjoyed seeing Zan-Gah's battle to do right by his brother while still protecting the tribe he calls home.  I loved the fact that Pax didn't squelch her true self to become a traditional wife AND that Zan-Gah respects her all the more for it.  I also thoroughly enjoyed seeing her become the hero for a spell in the book, something you'll have to read for yourself.  It was brave of her on many counts and that's not something expected of the women in her new tribe.  ALSO, I have to give a brief mention to their friend Rydl who's smarts are JUST as big as his heart...and also introduces us to a character with different "interests", something not normally tackled in stories set in this time period.  Additional points for originality!  Moving forward...let's check out book three... 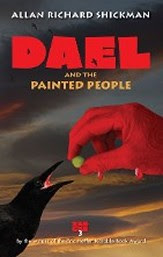 Dael and the Painted People

This time around, the narrator position shifts to Dael but wait, what's this?  He's a kinder, gentler soul than previously seen (well, at least until you reach the later part of book 2, but I'll let you read up on that to see just how that astonishing change happens) and with Sparrow in tow, he's seeking out a tribe previously encountered on his journey to the Beautiful Country...the Painted People.  Think of them as human rocks because really that's what they resemble when in full camouflage mode.  They paint their entire bodies red with the red rock from the area they live in as a display of their connection to the Earth...but that's not the ONLY difference between the tribes.  This one is run by the WOMEN.  Yep...the women.  They are the ruling party within the group, hunters, archers and the like.  Oh, the men folk help out too but they are the consulted part not the determining party.

Though Dael sought this tribe out in peace, discord tends to follow him wherever he goes...almost like a ghost as penance perhaps for his past deeds.  *ponders*  Whatever the reason, his lot in life at this point seems set and he's about to make an enemy out of a formidable man of the tribe.  Did he deserve his distrust and foolish acts of jealousy?  No; in fact he did everything he could to discourage it, even borrowing a trick from his former enemy now friend Rydl but some people just won't listen.  They are poisoned by what's in their minds and will hear nothing that is said to their hearts no matter how true.  Sad really...I think they could have gotten on well together, even learned a thing or two but well, let's just say that after the ends are met, it's doubtful he'd be good company.  *ahem*

I love how the author introduces us with ease to a new people once again.  He gives us something to build on so we know their history and inner workings but without creating the need for a history book to be written on each.  The connections they have with other tribes is realistic as are their reactions to events that transpire.  I have to say it, it's a well rounded ending to a GREAT series.

So...in conclusion, this is definitely a series I'd recommend to Middle Grade readers and older that enjoy adventure, a little history and all the quiet (and loud) ponderings of the mind.  There is much to be learned here besides hunting, fishing, weaponry and social ladders.  There's friendship, understanding, forgiveness and love at its heart too.  A well balanced read for boys AND girls that will keep you turning pages straight til the end...and then perhaps wishing for even more.  Hmm...maybe Rydll will get his own story telling about when he was back with the Wasp people or Pax or...

Review copies received courtesy of Bonnie at Earthshaker Books.  (THANKS!)  For more information on this series, be sure to stop by the official website.  The entire collection is available now in print, ebook and audio formats so be on the look out for it on a bookstore shelf or online outlet near you.

Oh yes. I thought these were well done for middle school aged kids. A bit of history they can relate to with history class and much more to go with it in the story and relationships. Great review.

I love this series! The books are so awesome!