Things aren't always what they ssssseem....

Hi there!
Welcome back to another day, another post here at Satisfaction for Insatiable Readers. 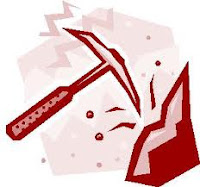 Today’s been an interesting day to say the least, life wise and no, not in the “yay for me” vein, more like the “woe is me”…*sigh*…oh well, such is life sometimes.  ~shakes it off~ Darn day…go away already!  Hmm, it looks like it’s gonna need a little help to get the message.  I wonder if I can recruit some of the critters and creatures from today’s story; then again, that didn’t really go so well for Mr. Tillinghast, now did it.  *-* 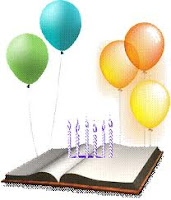 What’s that?  You recognized that name?  Congrats to you my fellow avid reader; if not, no worries…we’ll get you on the right path here soon enough.  ^_^  Today, we are delving into the world of Children’s Fiction with a BOOK BIRTHDAY celebrant ready to PAR-TAY!  Now it is a costume event so I have to ask…who will you be going as?  Yes, WHO; not what, but WHO…and I’m not talking “in the guise of” here if you catch my drift.  Yes, things are not always what they seem and in this series, people are not often who they appear to be either.  Ready to enroll in another semester at ?  If your answer was yes (as it should be!), gather up your courage, you’re gonna need it.  Today’s book of choice is… 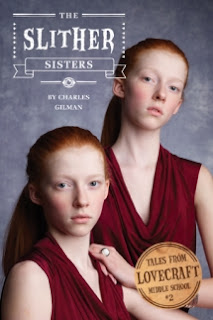 Let’s see, now for those of you previously following the goings-on at this educational institution (or as I like to call it, “the-adventures-of-Robert-Karina-Glenn-and-a-truly-awesome-two-headed-rat”), you may recall that when we last left our trio + one, they had managed to narrowly escape the clutches of one pretty heinous monster, formerly known as Professor Gargoyle, only to be presented with the formerly lost Price twins who though back from who-knows-where, seem off somehow (< - understatement of the century!).  For a brief glimpse into Book 1, click over to the publisher’s page; for a quick recap, check out my review right here on the site.

Book 2 picks up just where the first left off (LOVE it when that happens!) leaving you more time to explore their world and the one Tillinghast purposefully created on accident (intentional oxymoron since he was trying to accomplish this just not the way it turned out).  Trust me, it’s a win-win because if the adventures continue the way that they’ve been, you’re gonna want a good long series to experience it in…or at least I know I do.  ^_^  Anywho, the Price sisters are back and running for student council president but despite their cupcakes every Friday platform, something is fishy about these two.  They act too prim too proper too EVERYTHING like they are auditioning for the role of a lifetime…and what’s with the obsession with swimming everyday at lunch, by themselves, and not coming up for air like after SIX+ minutes!  Yeah…whatever assumption you are making right now is WAY off base and probably TEN times easier to wrap your mind around than the truth of it all…but then again, that IS one of the reasons we love these stories so well.

The fate of the school, nay the entire class body (and their bodies…let’s not forget that part of things!) is hanging in the balance.  What’s a boy to do?  Oh, I know…run head first into the problem with a severe lack of belief in oneself and expect it to all turn out in the end, right?  WRONG!  At least partially wrong…while Robert is not the bravest, the strongest, the quickest or the anything-est, strength in this case comes in numbers.  In his heart of hearts, he really is all those things, believe me, I’m not knocking him down a notch, but he lacks enough sense of self to believe it (sound familiar?)…thank goodness for friends even if they are a somewhat motley crew.  Well I mean really, what else would YOU call a former bully, a ghost girl and a two headed rat?  Yep…that’s what I thought.  Description aside, they are the best friends a guy or girl could ask for and considering the situation they’re facing is pretty dire, it’s just the right mix to have a shot at making it out in one piece, as yourself…you know, not harboring any spirits, creatures or the like that aren’t already a part of you.  *ahem*

Do they win this round against the dark minions of Tillinghast?  Yes in some ways…no in others.  You wouldn’t want me to spoil the surprise now would you?  Trust me, there is QUITE a surprise too…it’ll leave you with raised eyebrows and a gasp expression on your face whilst reading the last few pages for sure.  What you can count on though is another great read for fans of Middle Grade fiction filled with adventure, danger, courage, hope and good friends.  The new characters we meet along the way add to the overall flavor of the story as do those familiar souls that expose another layer of their true selves.  It’s a great combination that adds up to another successful release from an author that is leaving their mark in earnest on the reading world and a publisher that says “pfft” to boundaries by bringing us quirky hit after quirky hit.  So add a little celebration to your day and give a warm welcome to this title as it makes its debut…otherwise, I might have to brush up on the chant that Robert uses this go round and believe me, what it summons is NOT a pretty picture… (^_^)

Review copy received courtesy of Eric at Quirk Books!  (THANKS!)  For more information on this title as well as their complete catalog, be sure to visit them online, like them on Facebook, pin them on Pinterest, or follow along on Twitter.  To explore the world of before, after and during your read, stop by the official site, or check out their Facebook page.  Book 1 (Professor Gargoyle) and Book 2 (The Slither Sisters) are both available now on a bookstore shelf near you…and stay tuned for the next addition to the series, currently scheduled for May 2013, TheTeacher’s Pest!  Oh and yes…it will have a FAB lenticular cover JUST like the first two…can we say awesome sauce?!
Until next time…happy reading!

Sounds like another good one! Curious about what's the deal with the Price sisters, especially their swimming obsession!