Light from a Distant Star by Mary McGarry Morris

Hi guys!
Welcome back to Satisfaction for Insatiable Readers…the place to be when the need to read strikes and you’re looking for a recommendation; happy to oblige if I may!  ^_^ 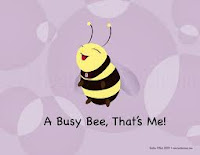 So, for those of you I chat with usually throughout the week, you may have noticed my lack of presence on the social media sites…for that I am truly sorry.  No really, I am!  I love talking with you guys and making connections and adding to my TBR and the whole lot of it…BUT, this week work has been killer with a capital “K” and I’ve been unable to break free long enough to indulge in the lighter side of things.  *sigh*  Not to worry though…things are almost back under wraps and I’m thinking next week will be a bit more open; hopefully…it better be (*glares at next week*).  Anywho, reading has been getting done so what say you to a review of one of my recent completions?

Today, we are jumping back from the ’s Fiction straight into the arms of hardcore Fiction.  Why hardcore?  Simply put, because there it no doubt on where this title should reside; it fits its given niche perfectly.  The chosen book features a stunning cover that really makes you want to see where the girl is running too…or from…and to or from whom or what.  It opens so many questions in your mind even before you’ve read one page.  It’s one of those situations where the cover art and title work perfectly to draw you in…whether you stay enraptured or not though is another question altogether.  But I digress, allow me to introduce this work properly and then we’ll get down to the nitty gritty.  Today’s book of choice is… 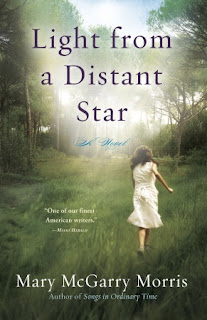 Light from a Distant Star
by
Mary McGarry Morris

It is early summer and Nellie Peck is on the cusp of adolescence – gangly, awkward, full of questions, but keenly observant and wiser than many of the adults in her life. The person she most admires is her father, Benjamin, a man of great integrity. His family’s century old hardware store is failing and Nellie’s mother has had to go back to work. Nellie’s older half-sister has launched a disturbing search for her birth father. Often saddled through the long, hot days with her timid younger brother, Henry, Nellie is determined to toughen him up. And herself as well.
Three strangers enter Nellie’s protected life. Brooding Max Devaney is an ex-con who works in her surly grandfather’s junkyard. Reckless Bucky Saltonstall has just arrived from to live with his elderly grandparents. And pretty Dolly Bedelia is a young stripper who rents the family’s small, rear apartment and becomes the titillating focus of Nellie’s eavesdropping.
When violence erupts in the lovely Peck house, the prime suspect seems obvious. Nellie knows who the real murderer is, but is soon silenced by fear and the threat of scandal. The truth, as she sees it, is shocking and unthinkable, and with everyone’s eyes riveted on her in the courtroom, Nellie finds herself seized with doubt.
No one will listen. No one believes her, and a man’s life hangs in the balance.

Sounds harrowing, right?  It is…and it isn’t.  Here comes the explanation.
It’s been compared greatly to the infamous TKAMB, which if you recall my post a year or so ago…I adored; for me, that might have been part of its downfall.  When immersed in the read itself, I couldn’t draw the parallels between the two in any fashion but in retrospect, I can see faint lines illuminated.  A young female narrator whose voice goes overlooked by most, yet is more observant than even her own mind will admit.  Neighborhood bullies.  Associations with those considered “less” that are frowned upon in the chosen time.  A crime committed.  The possibility of a wrongful accusation made (you didn’t think I was going to confirm who did or did not do the wrong now did you?  ^_^).  An ending that serves to finish the story, just not in the way that you might have expected.  For me though, that wasn’t enough to draw the comparison; in fact, if it hadn’t been made, I doubt I would have made it myself. 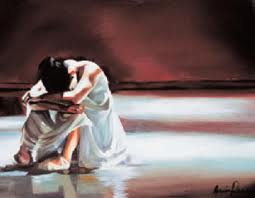 To me, though the storyline was interesting as a whole, the flow of the narration, the recollection of events as they transpired and the march of time were exceedingly slow; even slower than the beat down truck from Charlie’s junkyard would be if its motor decided to miraculously come to life.  I’m not a reader that needs action all the time or even noteworthy life changing events every other second but if things aren’t at least rambling along at a walk in the country pace, it becomes painful.  How?  Well, I start every book with an open mind, an open heart and the idea that something within was fascinating enough to capture my attention.  (Don’t we all?  ^_^)  When I discover something other than that or rather in this case something that impedes that enjoyment, it saddens me…it’s like seeing a dancer fall flat on her tutu after so much work was put in to the production.  I really WANT to like the book and sing its praises but alas, my overall impression is lacking the needed spark.  HOWEVER, as we all know, one person’s less-than-favorite title can be the next person’s all-time-instant-classic…

In its favor, I can say this…despite the roadblocks I encountered, I DID finish the book.  Why?  No, not simply because I don’t do “DNF” reviews, but rather the mystery of “who done it” underneath it all HAD to be solved, or rather brought to light. I could not be certain who actually perpetrated the crime (though I did guess accurately with a little guidance from a character or two) nor imagine how or IF it would be fairly prosecuted and once things start to unravel enough towards the end of the novel for truth to sneak its way in, the pages flew by.  The cast of characters though larger in size (as in the one’s that “count” are rather numerous) works well and serves to show how varied a town, even as small as theirs, can be.  From Jessica (“friend” who has WAY more troubles than imagined) to Lazo (eccentric artist), Dolly (“dancer” and new tenant of the Peck’s) to Max (shady past that might overshadow his future), Nellie (our leading lady who is rather misunderstood herself) to Charlie (a cantankerous grandfather if ever I’ve read); the list goes on and on and yet you’ll remember each for their quirks and contributions along the way.  The title is fantastic, the cover art lovely, the ending...quite a surprise though I’m not certain if I was satisfied or merely placated.  It’s not what you’d expect but it is what it is…THE END.

Review copy received courtesy of Jonathan at Random House,Inc!  (THANKS!)  For more information on this title as well as their full collection, be sure to visit them online or across the social media landscape including Facebook, Twitter, Pinterest, and Google+.  This title celebrated its paperback debut July 2012 via Broadway Paperbacks, an imprint of Crown Trade and should be available now on a bookstore shelf near you.  Recommended read for older teens through adults.

What an interesting review. The book sounds different than I expected from the cover. I love that cover- there is just something about it.

Thanks for sharing!
~Jess

Sorry it lacked the spark for you.

And hope the week calms a bit with the weekend approaching. :) Take care and hope the new dog is adjusting wonderfully for you. :)

Sorry this didn't quite do it for you..and I am a huge fan of TKAMB..I love it, simply love it.

Hmmm...I have never been able to read her books...I always want to but I can't...

Hope next week is better for you and things settle down!

Sorry to hear that this one didn't live up to your expectations. It's always disappointing when a story lacks that all-important spark. Hope your next read is sparkling awesome!