The Downside of Being Charlie by Jenny Torres Sanchez

Hi guys!
Welcome back to Satisfaction for Insatiable Readers...the place to be when nothing would satisfy you more than chomping down on a nice big serving of...literature.  ^_^  What can I say?  I am to please.

Today we are looking at a Young Adult Fiction title that released last year from an author that knows her subjects well...could have something to do with her former calling in life (she was a high school teacher!) if I had to guess.  It takes a look at life through the eyes of a teenager with all its ups, downs, arounds and throughs and manages to pull back the curtain on some sensitive subjects you wouldn't anticipate at first glance.  Trust me, there is more here than meets the eye even if the cover has us looking directly into our lead character's.  Without further ado, today's book of choice is... 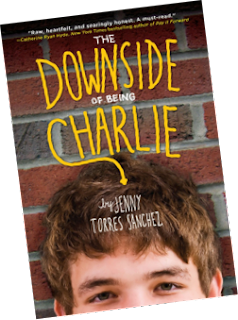 The Downside of Being Charlie
by
Jenny Torres Sanchez


Charlie is handed a crappy senior year.  Despite losing thirty pounds over the summer, he still gets called “Chunks” Grisner.  What’s worse, he has to share a locker with the biggest Lord of the Rings freak his school has ever seen.  He also can’t figure out whether Charlotte VanderKleaton, the beautiful strawberry lip-glossed new girl, likes him the way he likes her.  Oh, and then there’s his mom.  She’s disappeared—again—and his dad won’t talk about it.
Somewhere between the madness, Charlie can at least find comfort in his one and only talent that just might get him out of this life-sucking place. But will he be able to hold his head above water in the meantime?


To put this one "simply" is to undermine the many currents running just below the surface...but in a phrase, it has great depth.

When I first started my read through of this novel, I thought okay, so it's a story about a formerly heavyset boy, how his life may or may not improve now that he's svelte and his continuing struggle to remain on track.  Yep, all of that IS in there...but there is MUCH more than first perceived by you OR me and that "muchness" is what makes this one of those hidden diamonds in the rough.  Let's dust off a layer or two of mystery to bring its true luster out shall we?

As previously stated, there is MUCH more going on than first meets the eye.  Much of the mentioned MUCH is a disintegration of everything Charlie's come to know...starting at home.  His family life is in shambles though he doesn't fully understand the magnitude of it all just yet.  From his relationship with each of his parents to their communication and interactions with each other (or lack thereof)...the foundation of this home is unstable to say the least.  Could anyone really blame him for having a hard time of things?  I can't...though his initial methods of coping were DEFINITELY questionable.  I was happy, proud even, when he reached out for help instead of furthering the damage done to both his life and his self worth.  He certainly gets brownie points from me for not only seeking out someone that could help but sharing his pain with others through his talent (photography...he's got a knack for capturing things you might not have seen at first).  It wasn't the easy thing to do by any means but cathartic exercises good for the soul often aren't...hats off to you Charlie.  Moving onward through his list of woes...

His friend count is down to pretty much one, at least in the true friend department, and the value of that friendship will really shine as shtuff begins to hit the fan.  Yes, Ahmed is an unusual friend in that he marches to his own drummer, or rather croons to his own "Rat Pack" (yes...he's a Sammy Davis Jr fan to the max), but a true one nonetheless.  Is he perfect?  No.  Does he try?  Yes...and you know what, that's what REALLY counts.  You can't make someone share all their personal thoughts, ponderings and happenings with you even if they do carry the BFF moniker, but being there and being receptive to them when they decide to open up again, that's where you separate the rare gold (true friends) from the fools haul (many acquaintances).  Ahmed is a true friend, of that you can be certain.  Last but not list on the woe list...school.

Senior year was to be the icing on the otherwise tasteless cake for Charlie.  He'd suffered through being a freshman, taken it in stride as a sophomore and made it through being a junior; this year with his new lease on life was suppose to be a cakewalk.  Unfortunately, even the best laid (even if unexpected) plans can go south and although it seems like yet another trial to be suffered through and something he wouldn't wish on his worst enemy, it works out for the best.  How so?  Well, the "trial" is his forced association with a pariah of the school thanks to shared lockers but in all honesty, I don't think ill of Tanya Bates.  Wanna know my personal thoughts on her?  Oh come on, you know you do.  (^_^) 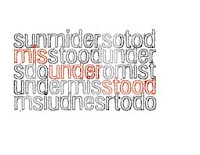 I think she's severely misunderstand but thinks highly enough of herself not to give a rats rear end what others think.  Does that help her in the friend department?  Decidedly no.  Does it help her survive the DAILY bullying she endures (albeit not totally in silence because she can certainly dish back what she's being served)?  H to the E to the double L, yes....and sometimes in high school that's all you can really hope for.  I was actually sad for this young lady because I can only imagine how much of their antics she's had to put it with through the years but since the story is not focused on her (though that would be an interesting read too I'm sure...perhaps another writing prompt for the author ^_^), we don't really get to learn a lot of her back story.  By book's end, she can add two people to her "not-friends-exactly-but-definitely-worth-investing-some-time-in-getting-to-know" list...though I won't say who or why.  It's a BIG blow up that I actually wish was BIGGER for some (*ahem* Mr. Delancey *-*) but it serves its purpose for kicking things into gear.

That my friends is just the tip of the iceberg though as Charlie navigates the ups and downs of teenage-dom with a family life that is currently less than ideal...but it's not all bad.  Along with the pain comes a few realizations like he is MUCH better at his chosen craft (photography) than even he imagined, new teachers (aka one Mr. Killinger) are not always here to destroy your day because sometimes they actually care, and while the prettiest girl in school would look great on your arm, if her heart doesn't match or her mind isn't in the same frame as yours, you're probably best finding a new field of vision.

All in all, a realistic portrayal of a young man making his way through life.  It's not pretty, it's far from perfect, but with a little help from his friends, of both the personal and adult variety, and a humongous serving of self confidence mined from the very depths of his soul, things may not turn out so bad after all; in fact, it may even greener on the other side as the saying promises.  A great read for teen boys (AND girls!) and beyond;  for the younger set, it will give them someone their own to really connect with and learn from...for the older souls, it serves as a reminder that there are no true secrets in families and what you do affects the whole lot.

ARC for review courtesy of Seta at Perseus Books.  (THANKS!)  For more information on this title as well as their complete catalog, be sure to visit them online.  To discover more about the author herself, stop by her site and say hello, check out her current thoughts on her blog, like her Facebook page, or follow along on Twitter!  This book was released in 2012 via Running Press and should be available now on a bookstore shelf near you.  Need help locating a copy or prefer to order online?  Here's a link or two to get you started...Indiebound, Amazon and Barnes & Noble.

OH!  One more thing...I was nosing around the author's site and she has ANOTHER book coming soon...this year in fact potentially titled Death, Dickinson, and the Demented Life of Frenchie Garcia.  The synopsis sounds absolutely appealing to me (*adds to wish list*), how about you?  Just CLICK HERE to take a peek and share your thoughts in the comments!

Wow..i am glad you reviewed this, because there is definitely a lot more to this book then i originally thought..excellent review! I always enjoy your thoughts and opinions :)

This sounds like a book with some deep ideas. I like that there are many layers and the main character seems interesting. Thanks for sharing!
~Jess

Great review! Don't often read books with a male as the MC. Love the sound of Tanya, so hope the author takes you up on the hint!