Hi guys!
Welcome back to the place that aims to please the reader in you...Satisfaction for Insatiable Readers.

Today, we're getting off to a late start thanks to an overloaded work day (*grumble grumble*) but never fear...*dons cape*...the Insatiable Reader has arrived!  Relieved?  I knew you would be.  ^_^  In the spirit of tackling the impossible and never letting anything stop you from being the person...or chicken...you want to be, we're heading to the farm, literarily at least.  So pull up your overalls and throw on a big floppy hat (hey, too much sun exposure is nothing to kid about!), it's time to welcomes today's featured book of choice... 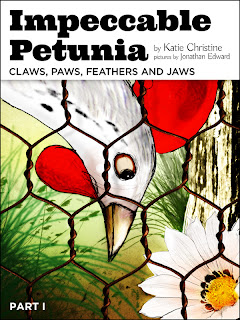 Much more than the cover leads one to believe, this is a story about showing your true colors and standing up for what's right even if it's the least popular thing to do.

Petunia is an amazing little hen with an incredible eye for color; she even tends to the needs of her little garden on a daily basis to make sure it's always at its best.  What's that?  Oh, I know; you're wondering what a chicken is doing tending a garden instead of just flapping about, clucking, laying eggs and eating grain.  Good questions indeed but...aren't we being a bit short sighted?  I mean, shouldn't she pursue her dreams and delights just as much as the next hen?  Doesn't she deserve the chance to express herself and experience new things?  The chance to flourish in the sun and spread her wings?  Indeed she does...and thanks to a few unlikely friends, she'll have that chance.

Take one human out of their element and in need of some companionship, one cat whose claws are not quite as sharp as they might appear and add in one hen, namely Petunia, ready to take a chance however reluctantly with surprising results.  It's amazing the kinship she feels with this duo...and it's also amazing the unending belittling and bullying she endures at the hands, excuse me, wings of her fellow hens.  The worst of them all (well, for the most part) is Bernadette.  She's a heifer of a chicken if ever a chicken was one but that's not what makes her a bad egg; it's her evil tendencies   All she wants is to be top hen of the house, or at least rate high enough for her mother to notice her in a good way.  Her course of action to accomplish this though is less than honorary, making me pity her a bit less....but one can't help but feel some part of empathy for this hefty bird because though how you turn out is greatly a matter of choice, it's also influenced by circumstance and her mother was not the best example to follow.  *tisk tisk*  Moving forward...

The blend of characters, personalities and situations covered within this story was wonderful and the author's ability to make you care so much about what many simply consider "poultry and a pet" was amazing.  I could see the care that Petunia extended to the world around her, even as she took her first tentative steps towards the right shade of paint for the kitchen walls.  I could sense how much she suffered at the hands of her "extended family" while simply trying to tow the line...and how much her sense of self wilted every time she had to pretend to be someone she wasn't.  I smiled when Macy turned from foe to friend, fretted when the big throw down occurred and rejoiced when everything was said and done. 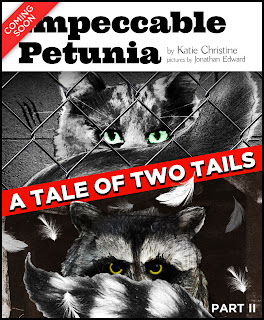 In conclusion, this is an amazing little story that will capture your heart while reminding us all that our lives can be THAT much richer if we choose to accept others for who they are as opposed to who we wish them to be.  There is something to be learned from everyone but what that something is can never be realized if not allowed to blossom and grow.  Enrich your own life by helping those around you to feel accepted and loved; you'll both be better for the experience in the end.

Ebook for review courtesy of author Katie Christine.  (THANKS!)  For more information on this title as well as the forth coming sequel, A Tale of Two Tails, be sure to check out the official website, or stop on over to Amazon to pick up a copy to call your own.

Aww who knew a hen could be so cute!

Sounds like an adorable read with a good moral! Poor Petunia, having to put up with others not accepting her for who she really was.