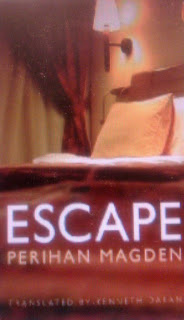 Hi there!
Welcome back to the Saturday edition of Satisfaction for Insatiable Readers...the place that rolls out the red carpet for the weekend and with it, bookish fun to boot! Although considering today's title, a red carpet may not have been the best choice...though it would hide any trace evidence rather well.

Today we are going abroad as we explore a translated work from a Turkish author that has a certain air of mystery, a huge helping of family ties...and a heaping handful of chilling creepiness.  The phrase "things aren't always what they seem" can certainly be used here, but it would be the understatement of the century. Please welcome today's book of choice...

The short summary... it's a story that explores the depths to which a mother's love reaches.  The longer story...that takes a bit of explaining.

I read in several reviews that some felt the flow of the story was interrupted by or lost in translation. Seeing as I don't speak or read a lick of Turkish, I'd be hard pressed to confirm or deny that claim entirely. What I can comment on is my own experience and to me, it made sense.  The exploits of mother and daughter are told through alternating viewpoints (that of the daughter and that of those left behind in their wake...witnesses if you will) which meet in passing as each chapter rolls by. The awkward speech patterns and repetition were the result of an unwell mind; someone conditioned outside the parameters of what we consider "normal".  Though I did find the switches between internal and external voices (I.e. quotation mark usage or lack thereof) off putting, I was still able to follow the ever evolving events as if I was one of the cherished few items they opted to take with them.

Here we have a case motherly love gone bad. How bad? Oh, how's about "any sharp object will do if you cross me or my daughter" kind of bad.  Yep.    The mother figure has a past that she'd rather forget but can't escape for fear of "Them" catching up and every calculated step she takes only digs her hole deeper and deeper.  She suffers from bouts of mental retreat making her that unstable firecracker in a room full of black powder.  One false move and KABOOM! It's both confusing and fascinating to see how she manages life.  Determination, dedication, and love are certainly not lacking but restraint, patience and a clear head, or at least one socially acceptable are gone with the days of the dinosaurs.   The author created quite a character with that one because you feel equal parts sad and happy, angry and kind, scared for and of whenever she is concerned. I can only imagine the childhood she alludes to having, and yet we can't quite take her at her word so was it black or white, tarnished and garish or simply something her obviously-in-need-of-help mind misconstrued? Looks like we'll never know... *dun dun dunnnn*

Her daughter, on the other hand, is a mystery in the making. She had the same chance as all of us do as she entered the world but by fate or circumstance, she was swept into a world colored shades of obsession.  Was she ever left wanting? In the friends and happy memory department, yes...but otherwise, mother tended to all her needs. Never once did she go hungry. Never was there a time she when without shelter or proper attire (though proper in her mother's mind was a little "Baby Jane"). Never was she left to feel unloved nor unwanted because mother always had time for her. Mother was her constant companion and whether the relationship was healthy or not, it's a lot more than can be said for some higher standing families today. No, I'm not justifying the lengths the mother went to to keep herself and her daughter under the radar (until that one fateful day...) but props have to be given for her total giving if herself, both time and spirit, to her daughter's well being...no matter how twisted it truly was.  Speaking of that twist...

It follows them throughout the book like a roller coaster corkscrew with no end.  The twists and turns taken are both physical AND mental leaving the reader with much to digest by the time everything is said and done. You discover a pattern to their behavior and anticipate (though hope against hope you're wrong) what the future will bring for our stunning little lady and yet the final pages are a surprise; not completely but certainly something you didn't fully anticipate.. especially how it's carried out.  Suffice it to say that brutality follows this pair like a well loved shadow.

In the end, I'd say despite the curious paths it took (and the reading format I partook of it in), the wandering and weaving added up to a fast read that will keep most entranced til the bitter end. There are questions that arise as the story progresses and though answers are not immediately available, they do come .. not to mention the figuring out of it all is half the "fun".  Recommended read for older teens through adults...trust me, the mental fugues dealt with and lashings dished out are best left for an older audience.

Ebook for review courtesy of Emily at Wunderkind PR. (THANKS!) For more information on this title as well as their current promotions be sure to stop by their site (http://www.wunderkind-pr.com/) or follow along on Twitter (http://twitter.com/WunderEmily).  This title was released Fall 2012 and should be available now on a bookstore shelf or online retailer near you.

Nice review! I don't do well with translations, so think I'll skip this one though.