READ ALL ABOUT IT: XII: GENESIS by Jason Rowe and Brian Palmer - FREE Download!

Hi guys!
Welcome back to Satisfaction for Insatiable Readers....the place to be when the need to read comes a calling; trust me, the answer is always yes.  ^_^

Do you like to read?
To you indulge in ebooks from time to time?
Do you like exploring new worlds of fantasy and dystopian-type futures where things are on the brink of going from bad to worse and the ones standing in its way you're not sure whether to call friend or foe?

If you answered yes to any or all of these questions, YOU my friend are in LUCK because RIGHT NOW there's a FREE READ out there just for you...and if you like it, there's more where that came from as it just so happens to be book one in a forthcoming series!  Too cool, right?  Time for the scoop, so let's....

READ ALL ABOUT IT! 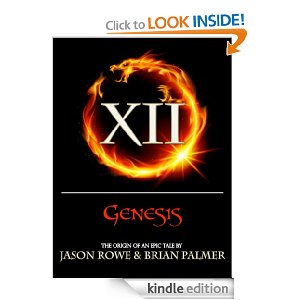 
A century after the world was predicted to end, it was indeed reborn. Under the leadership of the Overseer of New Earth, minds were united, diseases were cured, and the Earth was healed when population centers minimized mankind’s footprint, and the remainder of the planet was turned over to the will of nature. War was eradicated, the world embraced one religion, and the New Era began.
But darkness rises now, mistaken for a mere shadow cast by the bright light of human progress. It is the time of which the ancients foretold. It is the time when all things must end. …It is the time of The Twelve.
Six men and six women representing all creeds and colors are supernaturally gifted, but the unlikeliest of heroes. They are barely adults by the world’s standards, but still they are called.
Only they can stand against the growing darkness – but will they stand together?
XII: Genesis is the first installment of an eight-book series in the Young Adult / New Adult genres. If action excites you, if the supernatural intrigues you, and if love compels you - then you are invited to join The Twelve in their fight against the growing darkness that threatens New Earth!

Just click HERE and you'll be whisked right on over to Amazon to grab your copy hot off the ebook presses.

Though I've not read the book myself...yet...it is on my to read list for later this year.  Want to check out the series a little more before committing to a read?  No worries!  If you missed it, I did a little "meet the book" type post with excerpt a few weeks back right here on the site; that should get you started.  Afterwards, follow the authors online via Twitter, check out their Facebook page or take a gander at the official site and you'll be in the front seat to witness the bookish fun as it unfolds.

Special thanks to the authors for the heads up on this promotion!  (THANKS!)

Until next time...SPREAD THE WORD...and happy reading.

Thanks for the heads up. Have downloaded it and will check it out later.

Jason and I hope you enjoy the novel, Heather! And thanks again for posting about this, Gina! :)