Hi there!
Welcome back to the weekend edition of Satisfaction for Insatiable Readers... the place that doesn't care if you sleep in late or stay up all night, we'll be here whenever you're ready for a bookish break in your day.

Today, we're taking a look at a Pajama Press title that broaches the subject of tolerance, acceptance, and friendship...in a rather interesting way. It's a Children's picture book starring a duo of animal friends that... well perhaps friends is too strong a word here, because the looks they give each other combined with the tendency to be WAY way competitive lend more to frenemies, but I digress; allow me to properly introduce today's book of choice... 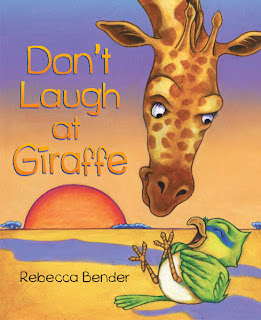 Giraffe and Bird run with the same crowd, but a friendship it is not, or at least not quite yet and certainly not in the traditional sense of the word.  One way or another they manage to compete against each other for the title of "most obnoxious" throughout the course of any given day but just because they don't share each others clothes and gossip all the time, doesn't mean that they don't have mutual respect for one another. The truth of this matter is exposed when one average day at the watering hole turns into a moment of embarrassment that sends one slightly awkward friend away with his head hung low. What created this sad turn of events? The thoughtless words or rather giggles and guffaws of another... good thing he has someone willing to show his true colors in order to set things right.

I first referred to this as an unusual read.  The reason?  Simply because the behavior these two exhibit is much less than the usual friendship picture books tend to portray. Its not all hugs and smiles but it is all about respecting one another and not allowing mistreatment to befall them. You see a problem, you fix it; same applies here as well. You don't just idly stand by and watch bullying happen. You step in, in your own little way, to make sure the affected party is alright and try to bring a smile to their day. Combine the lessons with the adorable and hilarious illustrations and you'll be well on your way to appreciating those you call friend a whole lot more.

Recommended read for all ages as there's a little something in it to capture the hearts and minds of anyone able to appreciate the warmth of a friendship not made in a passing glance but heartily built. Not all friendships are emerge from an exact likeness to one another, some take time and the pursuit of common ground...BUT those differences we uncover in each other are something to be celebrated. So who will you be celebrating today? I choose all of you! :-)

Review copy received cosy courtesy of Pajama Press. (Thanks!) For more information on this title as well as their complete catalog, be sure to visit them online (http://www.pajamapress.ca). This book is available now
on a bookstore shelf near you, so be on the lookout!

Until next time... Happy reading!

Sounds and looks like a great book with a wonderful message at its heart.

This looks so cute and I love the cover. Makes me want little ones again ..eh maybe not!