Today, we're exploring a Children's Storybook based on a historical person and movement that knocked a lot of people on their behinds.  Who and what?  Oh readers, you never fail to make me smile with your inquisitive nature and I'm happy to grant your request with an immediate answer.  One name should do the trick...

...Susan B. Anthony.
She's not just a face on a coin you know.
She was born on February 15th, 1820 (oh would you look at that...the same month and date as today, what a coincidence!  Hehe...) and throughout her life worked for such magnanimous causes as abolition, educational reform, labor equality,  and perhaps most notably women's rights and suffrage.

Suffrage.
It's basic definition is THE RIGHT TO VOTE but back in Ms. Anthony's day it was most often associated with a woman's right to vote, or rather lack thereof.  That's right and despite all she did for the movement, all the rallies to draw support, all the speeches to gain attention of "the man" and women of the times, she wasn't even permitted the luxury of seeing it finally reach the goal sought.  Ms. Anthony passed away in March of 1906 and the 19th Amendment to the U.S. Constitution (known as the Susan B. Anthony amendment) wasn't passed until 1920.

100 years.
10 decades.
THAT'S how long it took for women to gain a voice in politics.
Brings a new perspective to the whole election process now doesn't it?
Anyway, if you're wondering about the impromptu history lesson, than...you're probably not the only one.  Admittedly I don't go all out historian very often but it begged to be addressed not only for the marking of her birthday but also today's featured title... 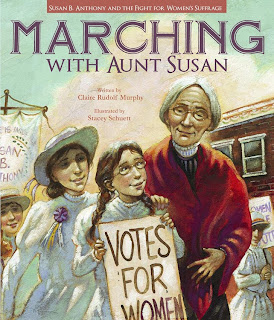 It's a children's storybook in structure and small details but otherwise it carries much historical accuracy bringing to light this massive effort to a who new generation.  In it, we are introduced to young girl named Bessie.  She's a firecracker in the making, this one for she lives in a time when women were not allowed to do just any old thing.  She gets a taste of this oppression first hand when she expresses interest in tagging along on a hiking trip with her father and brothers.  Their response...it's not ladylike, strenuous exercise is not for girls, and on and on.  Yep, even from her family because those were the times...but not for much longer if Ms. Anthony has something to say about it.

Bessie first meets Ms. Anthony at a suffrage tea her mother hosts at their home.  Though not impressed with her looks for she seemed like a grouchy old woman in photographs, in person her strength and guiding hand help uplift Bessie's spirits.  She instills in her the desire to make a change, to get the world to sit up and listen because what women have to say is EQUALLY as important as the words of a man.  One rally at Golden Gate Auditorium in San Francisco later and she'd committed herself to the cause as well.  Did it make her the most popular girl in her neighborhood?  Hardly, in fact some parents forbade their children to associate with her and her family...you know, since knowledge and empowerment are contagious...still they pressed on.  A lot of hard work, a strong backbone and many years passing by and change finally DID come. 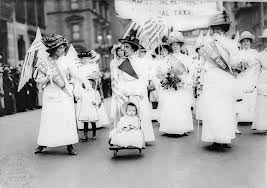 The story itself was drawn from the actual family papers of the real life Bessie, Bessie Keith Pond and while the in-between details may have been embellished, it still holds the magic and power of the movement it details.  The format used to convey the story makes it accessible to not only history buffs or the curious but to readers of all ages while the wonderful illustrations provide a visual flair that commits it to memory even further.  Once you've reached the story's end, readers are treated to an offering encouraging further research actual photographs, a mini-biography and a timeline detailing some key years in the women's suffrage movement.  Even the inside cover of both the front and back of the book are adorned having actual clips of newspapers and articles from back in the day bringing us even closer to the front lines and inviting us once again to learn about and FROM our pasts to help create a brighter future for tomorrow.  What's that?  You thought our battle was over?  Hmm, I wouldn't be so certain....just look at the hubbub that surrounded the running of a woman for vice president a few years back.  Something to think about the next time you take your "voice" for granted...

Review copy courtesy of Emily at Peachtree Publishers.  (THANKS!)  For more information on this title as well as their complete catalog, be sure to visit them online, stop by their blog, pin them on Pinterest, like them on Facebook or follow along on Twitter. This book is available now so be on the lookout for it on a shelf near you.

Not a name I'm familiar with, I guess I'll just have to buy this wonderful sounding book.

I must read this book! It sounds fabulous and it is a great book for girls and women to read to remember how far we have come and how we got here. :)

Thanks for sharing!
~Jess