Hi there!
Welcome back to the site that’s bringing the love back to you all the way from the Cretaceous Period,  bookishly of course…Satisfaction for Insatiable Readers. 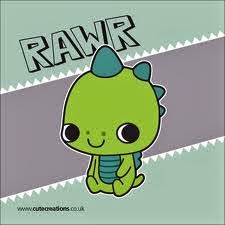 Why the reference to Jurassic times and such?  Aww, that’s a question EASILY answered by the revelation of today’s featured titles.  Yes, that’s right.  Titles…with an “s”.  It’s a two for one combo in the best possible sense of the phrase; meaning I’m bringing you news of not one but TWO fun new-ish chapter books in a series that combines past with present, leading to an unknown future.  Care to join our friendly little expedition?  Grab your hiking boots, thinking caps and muster your courage, we’re going on an adventure!  Introducing, The Dinotek Adventures by N.S. Blackman…. 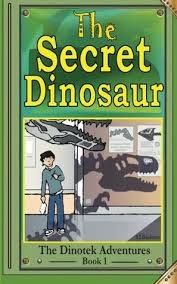 Meet Marlin Maxton.  He’s an inquisitive young lad who loves nothing more than to tinker with gears and mechanisms under the tutelage and guidance of his Uncle Gus.  (Hey, he’s a kiddo….supervision is a must in these circumstances!)  One day, he’s discussing his school’s upcoming field trip to the natural history museum, when his Uncle utters something about metal dinosaurs he met on a trip from his younger days to the very same place.  He seemed to remember them being kept in a room away from the usual traffic flow, and that Centrosaurus aka Protos were the keenest of all.  His curiosity peaked, Marlin tries to question him again…but his Uncle merely redirects the conversation, almost feigning ignorance on the matter.  Strange…curious…the early signs of a deteriorating mind?  The former two, yes; the latter, don’t count on it.

There’s far more going on here though than meets the eye, and much more mystery and danger ahead.  You see, there happens to be a certain man in power that wants nothing to do with the marvels hidden within the walls of this institute of learning…for shame indeed!  He doesn’t even understand what they are, where they came from, or what they are capable of imparting….and he doesn’t care.  Some people see the value IN things; others only see the value OF them.  I’d make my camp with the former if I were you if not for the knowledge but the company.  Now, seeing as how this one is aimed at younger audiences whose attention spans can sometimes mirror the weight of a hummingbird, we’re left with a cliffhanger-esque ending and ready for our second adventure to begin… 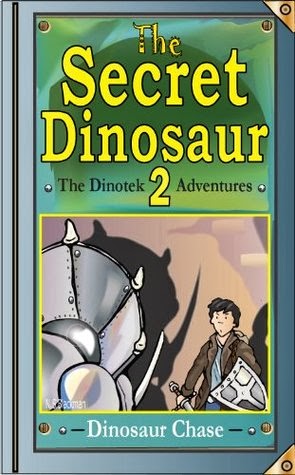 We open with a brief recap of book one, then catapult right back into the story at hand as if we never even turned the last page of the first.  Now that’s what I call a seamless transition!  Let’s see, when we left the dinoteks plus Marlin, we were in the middle of a planning session to see just how we might be able to escape oblivion…yet again.  Though there’s no meteor , asteroid or continental drift to contend with, there might as well be…and he calls himself Mr. Grubbler.  Well, okay, that’s his given name, he calls himself the museum curator…but that’s a debatable point to say the least.  See, in my mind, the person that carries that moniker has the best interest of the museum at heart.  Mr. Grubbler…yeah, not so much…and just wait, things are about to get even MORE interesting!

We’re going hunting, or rather HE is along with one Mr. Snickenbacker (light on the “mister” reference though)…and it’s a DINOSAUR hunt.  They’re yet to catch but fleeting glimpses of the dinoteks (soon to be remedied) and yet still are hay-bent on destroying them.  Humpf.  Scrap metal indeed.  Well buddy, you’ve got another thing coming to you if you think they’ll go down without a fight.  By book’s end, you’re more than ready to see what’s in store in the forthcoming conclusion…. 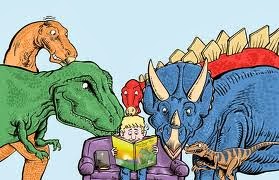 All in all, it was quite the adventure…and one I’m sorely looking forward to concluding (or just continuing, I’m good with continuing!) upon book three’s release.  I loved dinosaurs as a child, something reinforced by my Mother taking me to the Museum of Natural History (THANKS, MOM!), and seeing them brought to life in a new way for boys AND girls of all ages, is warming to my heart.  The length of these adventures is just perfect for kiddos branching out on their own, and the topics covered will aid in continuing the lesson after the final page is turned.  Who knows?  It may even spark the inventor in someone out there who can create a wonderland such as this….you know, something ala Jurassic Park without the whole “attractions eating the tourists” bit.  *ahem*

Review copies received courtesy of Sonya at Dinosaur Books Ltd.  (THANKS!)  Book one and two are both available now via Dinosaur Books Ltd, London, so be on the lookout for them (as well as BOOK THREE!) on a bookstore shelf near you, or online retailer of your choosing.

A bit too advanced for my great-nephew (3) but I'll keep these in mind for the future as he is dinosaur mad. Mind you that could change given that it was only Christmas that he was into some cartoon character or other.

Nice to see you reviewed these books too! I love your cute dino pic - can I teleport him across the big pond to my blog please?