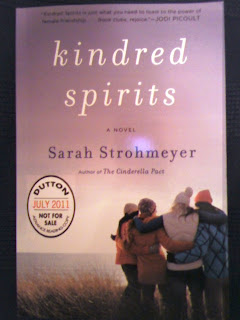 Kindred Spirits by Sarah Strohmeyer
(ARC courtesy of the author)
I was amazed at how quickly this one arrived.  Gotta say the cover is just as lovely in person.  It will be a challenge to wait on reading this one (review will be up in May....book releases June 30th, 2011) especially after the chapter tease I read online.  last week.  For a sample of what I thought so far, check out the WAT! featuring this title... 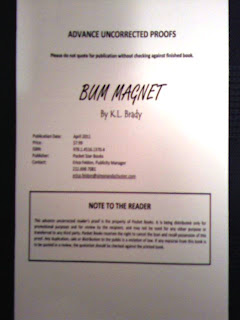 The Bum Magnet by K.L. Brady
(ARC courtesy of the author)
This is a break away from my usual reading material, but it sure sounds like fun.  Will be curious what the read through will reveal.    Release date set for March 29th, 2011. 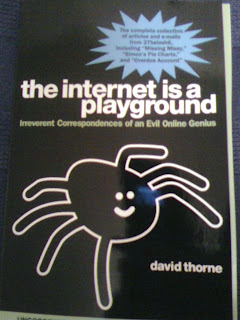 The Internet is a Playground by David Thorne
(ARC courtesy of Tarcher/Penguin)
This promises to be an unusual and fun read.  Set up as actual emails or posts to and from parties and businesses on the most outlandish topics to the most simplistic, I can only imagine what this one will hold.  Well, okay, so imagine is perhaps not the right word since I had to read the first two stories when it arrived and couldn't believe my eyes...he actually sent that as a response to someone? O_O  Oh boy...this should be interesting.  Scheduled release date is May 2011. 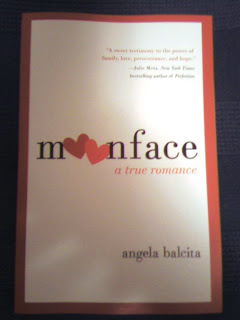 Moonface by Angela Balcita
(courtesy of Harper Perennial)
Unusual name but a potentially touching story.  This book is a memoir type account of one woman's struggle with kidney failure, the surgery and the person that would save her life, and all the reprecussions of such trying times.  I can imagine a box of tissues necessary for some parts of this read even though the ending is said to be positive.  Will have them at the ready just in case.  Release date on this title was February 1st, 2011. 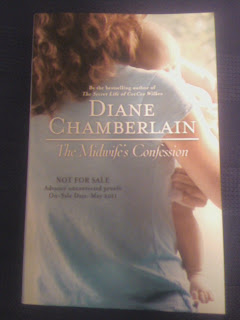 The Midwife's Confession by Diane Chamberlain
(ARC courtesy of Tricia at Meryl L. Moss Media Relations, Inc.)
It seems I am in the mood for a bit of Women's Fiction recently and when this one crossed my path, it looked too good to pass up.  Look for a blog tour swinging through for this title in May...which also happens to be the scheduled release month; there may even be a chance to win a copy but um....you didn't hear that from me.  ^_^  Stay tuned for more....

(1) Despicable Me minion hat
(1) Despicable Me DVD
(via contest from Fanbolt.com)
First things first....yes, that is me.  Yes, I AM wearing the minion hat.  Yes...you are jealous of my utter coolness in it.  ^_^  Let's continue....  So excited when I found out I won this prize pack from Fanbolt.com, seriously!  If you haven't seen the movie, you should.  It's much better than the previews did it justice.  As for the Fanbolt.com, well of COURSE you should check them out.  You know why?  Because not only do they hold fabulous contests such as this that people you know actually win, they have entertainment news to boot and forums to talk about whatever your entertainment loving heart desires.  From movies to TV, music to books, there's always something to see.  Hop on over to their site for a looksie or of course, there is always Twitter (1 or 2). 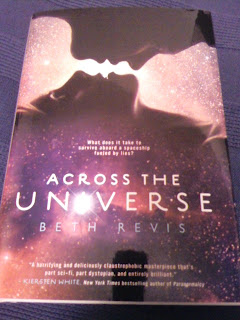 Across the Universe by Beth Revis
(via contest from Arena at The Nerd's Wife blog)
Promptly placed my signed bookplate inside along with my signed bookmark.  ^_^  As I so often do when a new book arrives, I sampled the beginning meaning only to read the first chapter....ended up reading three.  I now see what everyone was talking about.  (It's good!)  Can't wait to delve into it further.  If you haven't made the acquaintance of Arena yet, you're missing out!  She shares everything from life, love and reading all neatly tabbed at her site so be sure to stop over for a look. 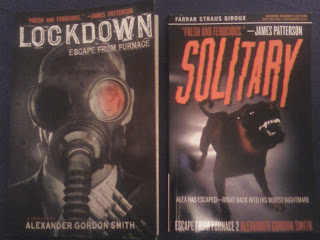 Lockdown:  Escape from Furnace
Solitary:  Escape from Furnace 2 (ARC)
by Alexander Gordan Smith
(via contest from Bri at BriMeetsBooks)
I was very surprised when I won this set from my good blogging friend and former Floridians site.  I remember seeing the first title when it came out and thinking whoa...that looks creepy, but good.  Now I get a chance to find out.  (Note to readers...the first chapter definitely lives up to my first impressions.)  If you haven't seen her site before, Bri mans the helm over at Bri Meets Books and features reviews and bookish posts on various topics though her focus is mainly on Children's and YA.  One day she'll be a big name in the world of publishing, but for now she humbles us with her keen eye and way with words.  Be sure to check out her site! 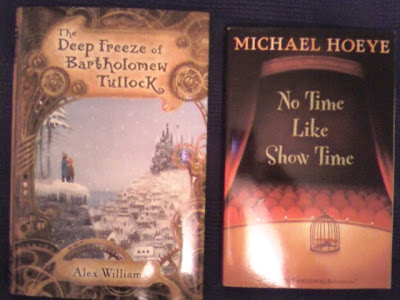 The Deep Freeze of Bartholomew Tullock by Alex Williams
No Time Like Show Time by Michael Hoeye
The first is a fantasy tinged children's novel about a family of fan makers and their town being oppressed by the ruthless Bartholomew Tullock...that is until the family at the heart of the story find something that just might end their town's suffering.  The second appears to be from a series starring a limelight loving mouse and in this particular installment, there is a mystery afoot! 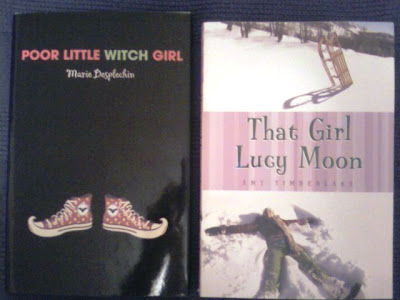 Poor Little Witch Girl by Marie Desplechin
That Girl Lucy Moon by Amy Timberlake
The first, how can you honestly resist those shoes?  Cute cover.  Toted as Children's Fiction, the story is one of the relationship between mothers, daughters and their views on the future.  The second, I can imagine many of you doing that right now with all the snow fall, that is if you can brave the winter chill outside.  From the back cover, Lucy sounds like a great girl that is just trying to be herself in a world intent on molding her as its own. 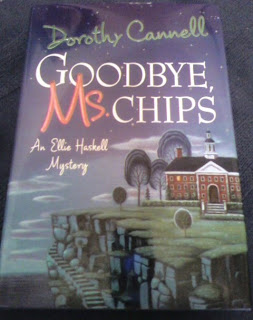 Goodbye Ms. Chips (An Ellie Haskell Mystery) by Dorothy Cannell
Ah, yes....again with the eye catching covers.  I love how the cover font is playful though the scene (that's a school house pictured there) itself carries the "mystery" aspect of the book.  Should be interesting....


That's it for this week.
So what do you think?  What did YOU get?
Do tell!

LOVE the hat! You have one cool week coming up :)

Whoa! That is one huge haul this week! I too love the hat and have to say that Despicable Me is currently a household favorite (I honestly think we watch it about once a day. LOL).

Also see a couple of the books I received as well! Moonface and Bum Magnet were both in my mailbox as well. :o) Looks like we're both in for some great reading!

the1stdaughter: Hehe..yep. ^_^ ~happy dance~ Yes, Despicable Me was MUCH better than any preview leads you to believe, great for all ages. Oh, small reading world on your recently received titles...love seeing what a fellow blogger thinks. Happy reading!

Great books! You've got lots of fun reads in there!

Woudn't it be easier to post books you don't have in your bag. Wow load this week.

Ooo, Across the Universe - congrats!

Cleverly Inked: LOL. Yeah, probably would be but then I don't get to help YOUR wish list grow. ^_^

We LOVED Despicable Me in our house We've watched in a ton of times already. I also am getting the new one by Diane Chamberlain. i read her last book and loved it! I am hoping it will be a new book club choice for us.