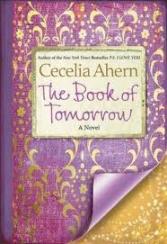 Sometimes your tone can change things, I know that. Sometimes in text messages, people don't pick up tones, or they pick up tones that aren't there and completely misinterpret innocent messages. I've had countless arguments with Zoey over what she thought I meant by a five-word text. But this statement I made, it came with a tone, a deliberate one. And Rosaleen picked up on it.
-- pg 150, The Book of Tomorrow by Cecelia Ahern (ARC)


How true is that?! I mean even with the teasers like this you can get the wrong tone sometimes, hence why the two sentence share turns into a three or four sentence blurb. I know I said I'd be finished last night, but alas...ran out of time, plus I know when to close a book down for the night (when you've reached a really intense part and you've had to reread a paragraph three times to grasp the significance....yep, time to shut it down). Today though...it will be done. (<--said in big echo voice for emphasis.) 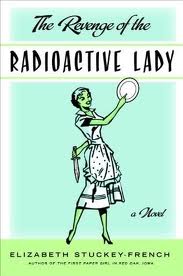 In her mind, many times Marylou has said, "No thank you," or asked, "What, exactly, is in this so-called cocktail?" Of thrown the drink in the nurse's face, screaming obscenities, or leaped on the nurse and forced her to drink it, or just jumped up and ran, care assed and barefoot, out of the examining room and down the hall and out of the hospital and into the late September sunshine.
-- pg 8, The Revenge of the Radioactive Lady by Elizabeth Stuckey-French (ARC)


Well it certainly sounds like SOMEONE is regretting a drink they were served once upon a time. Gee, I wonder what was in it? Just kidding...I think I have a good idea what with the title and all but you gotta give her imagination credit for working overtime on possible alternative outcomes had she simply said no. Looks like this will be an interesting read to say the least. This book was released a bit earlier in the month so should you desire to read ahead, check a bookstore shelf near you.
~~~~~~~~~~~~~~~~~~~~~~~~~~~~~~~~~~~~~~~~~~~~~~

These are both reallly good.

I really agree with the 1st one. There is a definite art to texting and emailing.

So so true on the first quote. I struggle with that all the time, just trying to make things sound just right.

And I love the looks of the second book! Hilarious! :o) Enjoy!

Great teasers! I especially love the first one - Cecelia Ahern is one of my favorite authors and I so want to read this one!!!!

I agree with the first one. I think tones can be taken wrong in emails and on blog posts as well. What about Twitter! Talk about a way to stir something up in 140 characters. Love the cover on The Revenge of the Radioactive Lady. I'm going to check that one out! I have a teaser on my blog, but it's part of TT.

the1stdaughter: Same boat right here. As for the second one...so far, proving to be rather funny...and vengeful. *-*

April: Thanks! I've never read her work before, but I'm definitely going to. Have since finished the book (at lunch)...and in a few words...IT WAS GOOD. Nuff said. ^_^

Julie: Great point! When has 140 characters ever had such an impact! Off to check out your teaser....