Hello everyone!
I don't often have a chance to pass along the awards I've received...alas, I fall a bit lax in that area but know that for every one I receive, each of you is more than worthy of them yourselves.  Anywho, I was granted an award this past week that has a bit of a deadline attached to it so I find myself pushed (ever so nicely) to pass it along before it loses it's full strength (i.e. there's a contest involved for any recipient with an approaching end date).  The award being given here today came to me from my good friend Alexia over at Alexia's Books and Such.  (Thanks!)  If you haven't seen her blog yet, you really should...definitely some bookish fun to be had.  Without further adieu, it's time to present the.... 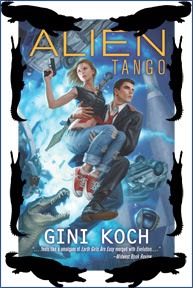 ...Worth Your Weight in a 'Gator Battle Award!

(Strange title but awesome description...read on....)

What this awards means...

Congratulations, you’ve won the honor of being Worth Your Weight in a ‘Gator Battle!

The award was created in honor of (at least according to them) the real stars from “Alien Tango”. No, not Katherine “Kitty” Katt or Jeff Martini. Alliflash and Gigantagator, Alligators Extraordinaire! The “Worth Your Weight in a ‘Gator Battle Award” is only given to the wily, the brave, and the cheeky, so get down with your bad self, you’re deemed worthy to run with the A-C’s! Now you get to spread the awesome by nominating other bloggers who would also be worth their weight in a ‘gator battle. Battling ‘gators is not for sissies or wimps -- only the strong survive -- so choose wisely!

2.Give link props to the person who gave you the award (don’t rile a ‘gator fighter -- it’s dangerous).

3.Spread the awesome and nominate five (5) other bloggers who you think will be worth their weight in a ‘gator battle.

4.Let the recipients know they’ve won this honor on their blogs.

5.Last but not least, shoot Gini Koch an email at gini@ginikoch.com and let her know you’re worthy of running with the A-C’s (put “Worth My Weight” in the subject line!) by sharing that you’ve been nominated and telling her which other bloggers you nominated, and she’ll enter you into the “Worth Your Weight” Contest. Keep reading to find out more details and what the loot is below.

Of course, you can choose to ignore your awesomeness, but then you’ll never have a chance to nab your own A-C or win the loot. And you know you want both.

More details can be found HERE, on Gina Koch's blog.

Whew!
It's always hard picking sites for these things since there are SO many that deserve to receive it.  Now that that's over with....off with you!  Go explore some of their sites for more great bookish fun!

Email ThisBlogThis!Share to TwitterShare to FacebookShare to Pinterest
Labels: 2011, awards

Congratulations! And thanks for nominating me. This is without a doubt the funniest award I have ever received =o)

Congrats on the awesomely-named award! Woohhoo!

*clapping and doing the happy dance* Thanks, Gina! I am truly honored!! Will get this posted tomorrow afternoon. Congrats to you on winning as well!

April: *bows ever so gracefully* (LOL) Fabulous. I'm glad you like it...and thanks for the congrats too. ^_^

Congrats on the award!

LOL That is a stupendous award. COngratulations.