The Violets of March by Sarah Jio

Hi there readers!
Long time no see.
Well, okay...not really...just a long time since an actual review post so it feels like a while, but hey...we all had fun with the Earth Week promotion last week from Peachtree Publishers, now didn't we?  That's what I thought.  Anywho, back to this post....

Today we feature a debut novel from a talented writer turned author who just so happens to be celebrating a BOOK BIRTHDAY today as well.  Happy wishes for the day coming your way as another literary masterpiece hits the shelves in a store near you.  Without further adieu, may I present today's spotlighted title and book of choice.... 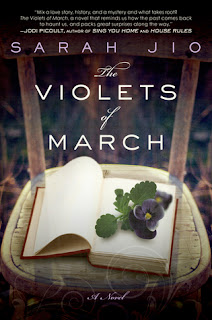 The Violets of March
by
Sarah Jio

How are you today?  A simple question to many, but EmilyWilson has much to consider before replying.  You see every day is a one step at a time situation.  Her marriage of so many odd years has just ended.  Her writer's block seems to have built itself into a new version of the "great wall".  Life just doesn't seem to be going her way right now, but all of that is about to change.  Funny how a simple yet well timed postcard can lead you just where you need to be....whether you know it or not.  The world works in mysterious ways, it's true, but Bainbridge Island is a world unto itself with truths yet to be uncovered and secrets laid to rest long ago...until now.  Will Emily discover pure fact or mere fiction?  Only the island knows for sure, but one thing is for certain, wood violets don't just bloom anywhere, especially at this time of year.  They are thought to appear only where true healing is needed, something this community could stand quite a bit of in so many ways.

First off, let's take a look at that cover.  Magnificent if I do say so myself.  It's subtle in the colors used which speaks to the somber moods within a good portion of the novel yet it manages to capture your heart with its simple beauty, much like the story within.  Great job on the items selected for the focus of the picture as well as the font types chosen to accentuate the title.  I love the alternating script versus print formats chosen.  Anywho, now that we've ogled the front, let's continue on our reading adventure.

The journey of the heart is a funny thing.  More often than not it is filled with twists and turns as opposed to the straight and narrow.  It can place you on the highest peaks of happiness or plunge you to depths so deep you'd be lucky to survive.  Such was the story of Esther.  Whose Esther?  Ah yes...I didn't mention her previously now did I?  Esther is a character within the story within the story.  Confusing?  Not really....once you're reading it.  You see, she plays the starring role in a particular red velvet book (or is it a journal...hmmm....) Emily stumbles upon in her Aunt Bee's house on Bainbridge Island.  It's a tale that takes place back in 1943 and if it seems to run high on the realistic emotions...there might just be a good reason for that; after all, the best stories are often inspired by what we know best....real life. 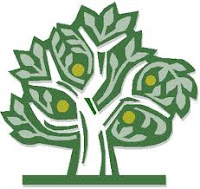 One of the first things I did upon finishing this book is sketch out a family tree of sorts.  Seriously, there are a lot of character connections to be made and I don't know about you but sometimes the character names get lost in the details.  It's true, I admit it.  With the number of books we (bloggers and avid readers....*high five* to you all) read in a year's time, my mind creates a general picture, an idea of the person if you will in order to carry the story along but sometimes the names simply get washed out with the tide.  This is one story you definitely want to have a firm grasp on who's who....trust me, it's important as it progresses.  When all is said and done, there is one character to whom most others have a tie in some form.  Who it is I shall not say, but it is unexpected to some degree.  Speaking of characters...

As I said, this is one book you'll do well to capture their images in your minds eye in order to follow the story more accurately, but most are memorable in their own way.  Emily, with her problems by the dozen and need to unlock the emotions she is holding inside.  Aunt Bee, Emily's familial relation that is open and high spirited one moment...and closed off to all requests the next.  Evelyn, the kind soul that is both a drinking buddy and bestie to Aunt Bee.  Elliot and Esther, the "star crossed lovers" of this fair tale portraying life from within the confines of the written word...and let's not forget Jack, one of Emily's potential love interests even after her opening "rejection" that greets us at the beginning of the novel.  There is one other love interest as well that she discovers is more of a blast from her past....his name is Greg.  I do have a bit of a bone to pick with this character though....

Greg was a love interest in Emily's youth and while certainly a "hottie" back then, he's matured since that time.  Is that a bad thing?  No...especially with the positive changes that he seems to have made...in some ways.  However, it's his appearance, sudden interest, and even more sudden disappearance that rattled my reading mind.  I mean he sort of just falls off the literary planet here without a trace.  Grant it, the way things end up, it's probably best for him, but it just seemed that he was written in enough to have some sort of a goodbye or see you later scene play out.  Also...the relationship built between Jack and Emily gets pretty serious rather fast.  Perhaps its just a matter of timing and for me it seemed a little off, but in the end it works for the purpose of the book.  Otherwise, thoroughly enjoyed each and every one resident of the island we had the pleasure of meeting.

As for the story, it was so much more than what I expected.  I mean the truths that are discovered are heavy enough on their own, but then you have to consider their impact on the larger scale of things and just as you've come to grips with that, BAM.  Something else comes into play.  The story within the story was very moving and when it ends about midway through the book, you are so not ready to say goodbye to the characters you've met, nor are you prepared for how the author could possibly continue the tale with so many pages left to go.  With that said, it is done remarkably well and though its absence is felt, the red velvet book served its purpose quite well.  Let's take a quick video break here....

Beautiful, wasn't it?  I don't often indulge in book trailers (something about simply allowing my mind to create the images from the words on its own) but this one does a fine job in conveying the spirit of the book without ruining any of the story elements.  Wonderfully put together.

In summary, recommended reading choice for those seeking a look at life in all its glory whether filled with sunny days, or little black rain clouds to spare.  Author Sarah Jio takes Emily's "common" plight adds a sprig of "it's not just you", swirls in a healthy dose of mystery and a mixed bag of love sure to keep you guessing til the final page has been read.  A wonderful trip awaits whomever dares to head the call of the island... will you? 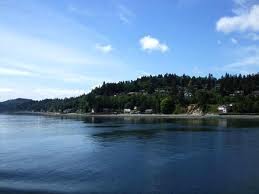 Review copy courtesy of author Sarah Jio and Plume / Penguin Books.  (THANKS!)  For more information on the author, feel free to visit her site, Facebook page, GoodReads profile, or follow along on Twitter.  Speaking of GoodReads, there is an option to win a copy of this novel open until May 10th on the site, so be sure to check it out!  To find out more about this title via the publisher or to investigate their full catalog, feel free to visit them online.

This sounds like it was a beauiful book! Thanks for sharing!

I love the paragraph about the journey of the heart. Sounds like such a moving read, thanks for mentioning it.

Question: Did Esther bug you? She so bugged me. Such a hot head.

I've been dying to read this book!!
I am already in love with the cover and I can't wait to get my hands on the book!

Thank you for this terrific review! I loved reading it and appreciate all your good words and insightful comments about the story. It's so fun to hear what readers think and see what details of the story speak to them. I'm very grateful to you! xoxo

mljohn: It certainly was. My pleasure. ^_^

Juju: Thanks! Not at first....but in her final choice a bit, yes.

Misha: Yes the cover IS quite wonderful, is it not? If you get a chance to read it, I'd love to know what you think. ^_^

Sarah Jio: Thank you so much for stopping by ad for the kind words. It was my pleasure and congratulations on the release! ^_^

I agree - a beautiful and intriguing cover. And nice review too. It's good to know that the book lives up to its outside!

I read another review about this, it was a good one too. Huh guess it's time to add it.

Deborah: Agreed....so disappointing when they don't.