Think OUTSIDE the box... 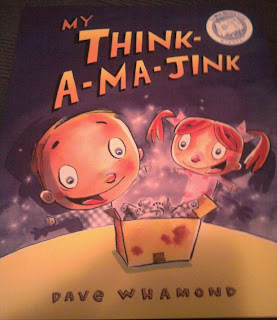 Welcome back to the Friday edition of Satisfaction for Insatiable Readers....the place to be when you could use a little bookish inspiration to start your weekend off right. Today we step into the land of imagination but not in the most usual way.  It's a children's storybook from OwlKids that is bound to get readers of all ages thinking outside the box...literally. Without further adieu, today's book of choice is....

MY THINK-A-MA-JINK
by
Dave Whamond

It's Jack's birthday and like all little children he's excited to see what presents his party will bring....or rather not.  You see, like many kids today who start off with a cell phone in one hand and a tablet PC in the other, the thought of another bright and shiny do it all for you toy just isn't appealing. I mean really, there's something said for being grateful one received presents at all but really....how many new serving robots or fancy musics players does one actually need?  Thank goodness for one last present his sister discovers he somehow missed at the party.... (The horror!)  ...for inside is the key to the adventure of a lifetime.

So...what was in the box? Ah, that's the million dollar question now isn't it?  You see, it was something and nothing all at once.  It was worth its weight in gold though weightless; unable to be traded yet shareable.  It's not what it held (for it DID contain something) but what it unleashed...the power of IMAGINATION.

With a brief note on how to use it, a few "magical" words (*ahem*..."THINK THINK THINK-A-MA-JINK HULLA-BA-LOO RAZZA-MA-DOO!") and an open mind, Jack and his sister Marie were off on adventures like no other.  Ever imagine being a 40 story tall monster bent on destroying a city? Jack did.  Or how about traveling to a time before humans and the wild things roamed the earth? Jack did.  How about turning your brother into Princess Stinkerbell?  Marie did that...hehe....but you see where this is heading.  Their creativity was set free and even when a potential disaster to their fun strikes, the potent cocktail of their creative juices could not be stopped for they had discovered the true secret to the present received, the power of imagination.

It can't be boxed...for long.  It can't grow old and disappear...it merely matures. It can't  be taken away from you....unless you let it be.  It's an intangible gift that everyone is granted, but not everyone uses....of which the thought alone scares me.  Can you imagine a world without imagination?  What current and future wonders would we miss out on if this one simple element of our genetic makeup was removed? Something to ponder, yes....but that's a world I wouldn't want to live in (anyone for a trip to the moon?).

Recommended reading for all ages from the tall to the small.  There's not an imagination out there that can't appreciate the message here ...and if you factor in the wonder filled drawings, you've gained those last few stragglers on that far side of the room over there (...yep, I saw you. You didn't think you could hide did you? ^_^).  Review copy received courtesy of OwlKids. (THANKS!) For more information on this title as well as their complete catalog, feel free to visit them online at www.owlkids.com or follow along on Twitter http://twitter.com/OwlKids

Sounds so cute. I want it.

Great pick, as I worry about children not developing their imaginations!

Awesome idea for a book! When I was a kid (and remains so to this day), my favorite ride at Disney World was Journey into the Imagination because he taught people how to look for inspiration all around them. With the internet age of insta-gratification, I worry that imagination is being left on the back burner far too often in lieu of something shiny and electronic.

Disclaimer: I work for Owlkids! But I also just wanted to add, one of the most wonderful things about this picture book for us, is it won the Blue Spruce Award in Canada last year, which is a very prestigious award chosen by real children in grades K-2. So not only does the story appeal to adults who are concerned about their kids losing the power of imagination, but very much appeals to children too!