They're watching your EVERY move...

Hi there!
Welcome back to the place that aims to satisfy the reader in you...Satisfaction for Insatiable Readers.

Yesterday, we paid a visit to the land of short stories; today...we're turning it into an over-nighter.  Yes, that's right; short story day number two...but this one paves its own path by being a smidge longer, thereby allowing us to development a bit more of a bond with the characters, what the peril they are facing is exactly and how they might, just might get through it intact.  Ready to read all about it?  Here goes.  Today's short story of choice is... 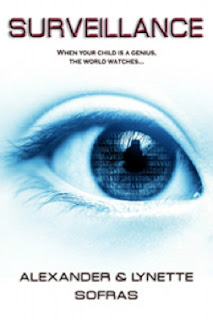 
At six years old, Harrison Avery is already considered a prodigy and, in a world suspicious of intelligence, that places him in jeopardy. His parents live in fear of his extraordinary IQ being discovered - and will go to any lengths to hide it. But how do you disguise genius in a six year old when you are under constant surveillance?

Can you imagine being in DANGER because you're TOO smart?  Yeah...only in fairy tales but then again...this story does present a good and realistic argument especially when you consider the government angle and the boy's origins.  *whistles....nope, not spoiling that*  Harrison is an interesting child if he can indeed be called that.  He approaches life somewhat removed and indifferent studying everything as if it is a problem to be solved.  He doesn't respond to things normally without some effort on his part and even then emotional exchanges are a bit rehearsed.  The parents love for their child is apparent but it's tinged with apprehension making  every move they make questionable.  All these things are explained by story's end but they provide for points of curiosity as their lives...and pasts...unfold.

Though short and sweet, I can honestly say that it was just enough to draw me in. Enough background was provided so I could see just where everyone was coming from whilst still keeping the future vague enough for me to imagine what MIGHT be in lieu of what is.  The concepts introduced and explored are scifi-ish in nature but not so much that those readers that don't dwell in that genre will be lost.  The short length makes it a great companion for your next reading break or water cooler topic of conversation and Ill bet there will be several dozen of you clamoring for more...as in an extended version of this tale that incorporates their lives before, currently and perhaps after (something the authors may be considering... ^_^).

In conclusion, a tale fit for readers of all ages though I do believe that mid to older teens through adults will glean the most from it as the scientific concepts covered are revealed.  Special thanks to author Lynette Sofras for the ebook for review.  (THANKS!)  For more information on this title as well as her expanded bibliography, be sure to check out her official site, like her on Facebook, stop by her blog or follow along on Twitter.  This ebook is available now on Amazon and Amazon UK.

Gina, thank you so much for reviewing this short story (co-written with my son) on your lovely blog.

It's a bit of a genre-departure for me so I've been quite nervous about how it would be received. Thank you for taking the time to read it and assess it.

If any of your followers would like a copy to read and review, they can contact me through my website or blog and I'll be happy to send a free copy to the first five who request.

Oh well done. Sounds like a good one and a short too. :) Thank you!