For the love of...YOUNG ADULT! Shadow Allegiance by Lacy Yager

Hi guys!
Welcome back to Satisfaction for Insatiable Readers…the place to be today and every day if you’re looking for something new to add to your MUST READ list.  Don’t worry, I aim to please…and speaking of please…

Today, we are shining the spotlight on a title that may have slipped past your radar.  It’s from the Young Adult genre and features that paranormal favorite…vampires.  Now before you turn away from the screen screaming vampires….AGAIN?! …keep reading, because this is one of those stories that does justice to both their classic portrayal AND our modern day fangers…you know, minus the sparkles.  (Though I do like my sparkles… ^_^)  Guys and gals, are you ready to join me on this adventure?  Then it’s time to gear up, both in weaponry and heartache protection, because we’re in for a bumpy ride in the BEST way possible.  Today’s book of choice is… 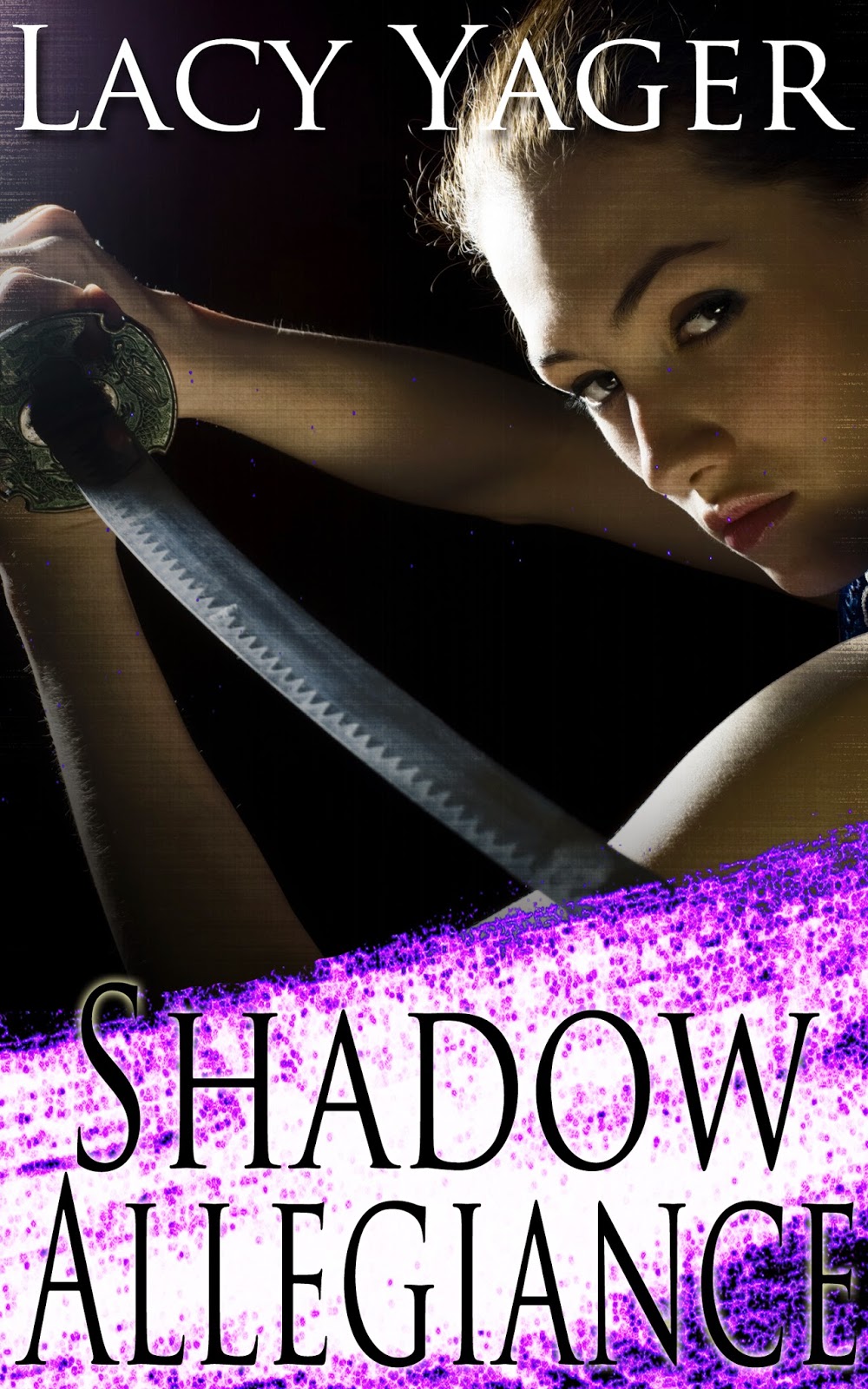 They were her enemies.  Until she became one of them.

A Chaser is born to kill vampires, sixteen-year-old Rachel Campton has grown up in her older brother’s shadow.  Until she wakes up a vampire, her own mortal foe.  She’s stronger, faster than her human self, but haunted by the bloodlust and the loss of her beloved younger sister.  Friendless and lost in enemy territory, Rachel must rely on Alex Wellington,  a former nemesis and centuries old vampire who looks like a college football player.

As Rachel goes deep into vamp territory, she learns there is more to the vampire life than killing humans.  She also discovers another side to Alex.  He is more than a murderer, he is someone that she starts to fall for.  Rachel faces the ultimate choice:  her new life and unexpected love or the family she left behind, the family that may now want her dead.

How’s that for a dilemma, right?  I mean one day you’re side of the fight is obvious and the next…well, let’s just say fighting with the man or woman in the mirror, even figuratively since I think we’re still holding true to the “no reflection” bit, is often best left for the music scene (…and if you didn’t get that reference, A) how old are you again? … and B) go Google it, you’ll discover an awesome song from yesteryear).  However, there are times that writers both on screen and on page get this battle right, and in my humble opinion…THIS is one of them.

As much as I read, it’s always a challenge to stay on top of my TBR Mountain.  I mean between the volume and life (aka the two-jobs-home-dogs-parents-and-general-stuff dance I do every day), it can be trying.  Why do I still do it?  Because…I LOVE READING.  I love taking yet another journey through the pages and sharing that experience with all of you.  When my shared thoughts spark others interest in the featured title or cause conversations both in comments on the post and life, I can’t think of much that tops it all.  Why am I sharing all this instead of the book?  Hang on…I’m getting to it.  The share is for this point…the more a book hooks me, the faster the read goes thus fitting even easier into my condensed schedule AND gluing me to the pages with a gleeful gleam in my eyes.  Of course, that’s a double edge sword because the faster it goes, the quicker it’s over and the sooner I have to say goodbye to another set of 2D friends (*le sigh*)…at least until next time (Hello, rereads!)…but the point is, THIS BOOK did all of that and then some.

I started this read on a weekend, and finished it about 2 days later.  Too long?  Well if I had been off, yes indeed…but seeing as I was working double shifts, I’m totally okay with the time.  Anyway…from page one, I was in.  Rachel is an awesome lead, even if she does take quite a few chances that place her in less than the ideal place at a totally inappropriate time.  She means well, has a big heart, and apparently leaves her left flank open as pointed out by Alex, who umm…has more than a fighting interest in keeping an eye on that flank.  *ahem*  (^_^) I love her determination to do the right thing, even if it does throw her under the bus so to speak.  She’s not afraid to take the hit if it means making her family and friends safe….even when they don’t know, realize or acknowledge her unasked for sacrifice.  In short, she definitely deserves a you go girl at the very least…and a whole lot more.

The “good guys” camp has a lot going for it both friend/family wise and power wise.  Let’s see, for brains, brawn and heart we have Maggie…despite the fact that her heart is no longer actually beating.  You guessed it…VAMPIRE!  The good kind of course but not in the whole demon with a soul way, more of a lifestyle choice.  I’ll let her explain that.  Then there’s Hannah, the resident warlock of sorts who was brought in to help Rachel’s kid sister Chloe harness her powers.  Yes, it runs in the family to a degree, to be set apart from others, however….not everyone had a choice in the matter, even more so than first perceived. ( *cue dramatic revelation music* ) Then we have Lily and Caleb and…well, let’s just say though the odds are not even when considering the vampiric masses the General (a formidable figure) is gathering, they still have a fairly large team.  Now for those in the gray areas…

The biggest contender here is Alex.  Oh Alex…*sigh*.  We get your indecision and your pent up guilt.  I can totally understand why you let the vamp side of you rule the day; who wouldn’t want to be conscience free for a while, you know?  Thing is, if you ever want to obtain the goal you’ve set your eyes on, you’re gonna have to let those baby blues shine through.  There’s a song by Train that comes to mind…the lyrics are something along the lines of “…these bruises make for better conversation, loses that line that separates…we’ve all got bruises.”  Definitely fits here.  Now, don’t go thinking that he’s a big bundle of “Angel” or “Edward” (though both rick their own stories) or other emotional bloodsucker, because he is a total bada** that’s rightfully earned the title…but he does have more to him than what the vamp side imparts.  A good lesson to look beneath the surface. Anywho, the other gray area residents are connected to Alex, namely his buds both guys and gal, and a surprise addition that comes packing more from the magical side of things.  Are they good or bad?  Evil or go with the flow? The jury is out for most of the tale especially with Rachel’s experiences, you could go either way.  By book’s end, we’re on firmer ground, at least until it all comes falling down. *dun dun dunnn*

In the end, do I wish I had read book one first?  Yes and no.  No because I didn’t feel lost in this story despite not having been in on the first adventure, but yes seeing as how I REALLY enjoyed my time with the characters (and also want to read more about the chill inducing Cataratoares) and would have loved this to be a reunion as opposed to an introduction.  No worries.  I plan on correcting that as soon as possible.  *jots note on wish list…in RED*  Needless to say (at this point at least I hope it would be presumed), I highly recommend this read for Young Adult fans of all ages.  The content is straight run of the mill with deviations here and there to contemplate feelings, and emotional draws but definitely kept PG…maybe PG-13 with the fighting included.

Signed review copy (~squee~) received courtesy of author Lacy Yager.  (THANKS!)  For more information on this title as well as the first and half editions in the series (the half is a novella), be sure to stop by her official site.  This series is available now in both print and ebook formats so be on the look out for them on a bookstore shelf or virtual retailer of your choosing.

Ooo, I'm loving that cover and this sounds like one I'd enjoy. And there's a book one...I'll have to go look into that. :) Thank you!

Just a note that these have been retitled - now "Alliance" (book 1) and "Allegiance" (book 2). Alliance is free on most major retailers. Thanks for the review.