Hi there!
Welcome back to the site that aims to bring the bookish fun to you every day of the week...Satisfaction for Insatiable Readers. 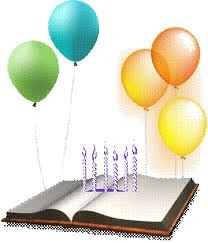 Today we are celebrating the book birthday of another fascinating read brought to my attention by Leyane over at FSB Associates.  (THANKS!)  It's the latest addition to the Young Adult genre via the folks over at Merit Press from an author whose previous works explored the world through prose.  (Hmm, that might explain the one character's chosen method of expressing his darker issues…interesting.)  Up front, the cover is curious and the read is definitely good....but boy oh boy the topics it covers; whoo!  Hard, to say the least….the very least that is, but I digress.  Let's properly meet today's book of choice.... 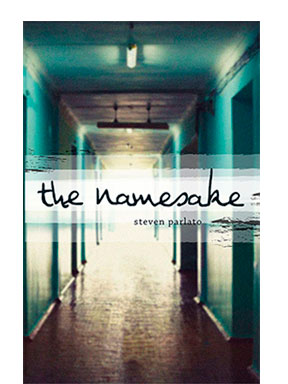 The Namesake
by
Steven Parlato

While he may be the smartest boy at St. Sebatian's Academy, Evan has no idea why the father he's named for committed suicide. A searching story of a boy's too-early coming of age
The Namesake begins when Evan is asked to "write about what he knows" for college essays, by teachers sure that such a gifted artist will get a full scholarship. What Evan knows is not as much as what he doesn't know, however. He doesn't know why his father chose to hang himself on Easter morning while he and his mother were at church, and what the secrets of a small town can tell him about his father . . . and himself. Hoping to finally uncover the truth, Evan and his best friend, Alexis, dig into the town's past only to discover its dark roots . . . and that some secrets are best kept hidden.

This is a story where the title’s meaning plagued me like a case of the measles; my own fault because I have that “have to know” sorta nature.  I was constantly trying to figure out exactly what it meant.  I mean to define the word namesake (according to Google) in its simplest form it is “a person or thing that has the same name as another”.  Okay, cut and dry; the connection is that the son is named after the father.  Whew….mystery solved; or rather not.  You see, there’s more here than meets the eye (surprising, right? ^_^) and whatever you think you’re seeing is probably not what it seems but something entirely earth shattering buried under several layers of  guise.  In a word…it’s GOOD.  In two words, it’s REALLY GOOD.

The writing will keep you hooked the whole way through as will the connections you forge with the characters…mainly Evan and Lex.  Evan is our lead narrator and the son of the deceased trying to figure out not only life in general (raise your hand if you’re sharing his boat in that instance) but also why his father took his life in his own hands and called it “over”.  True, they had grown apart somewhat; but what teen boy and father don’t.  True, his mother and father both were having troubles, even trying a trial separation to sort things out; but marital strife is common (unfortunately) and not insurmountable to the point of death.  The pieces just don’t add up and though Evan is not the most analytical person to walk the earth, he does let his heart be his guide…meaning that knowing WHY is of the utmost importance.  There’s no note, will or recent conversation to mull over…but what there is unlocks so many unseen doors that the journey back may be just as harrowing as the truths uncovered.  They say every journey begins with a step; in this case, it will begin with the turning of a page.

I have to admit, the issues dealt with are what made this a hard read for me; not in the “I-can’t-read-this” way because as I said, the writing wraps itself around your mind and won’t let go, but in the “I-want-to-read-this-but-geesh-if-I-could-only-throttle-a-few-of-these-people” way.  To put it bluntly, it’s a classic case of “mother knows best”…and no, I’m not insulting your mother or even insinuating what happens was purely the mother’s fault; it’s just adults being adults to the extreme.  How to put this without ruining it for you…hmm….*ponders*  It’s a situation of listening but not understanding (though I surprised myself by suspecting some of what actually occurred well before any big reveals).  When one is presented with a situation we either find unfathomable or undesirable, denial is the minds escape…the problem with that being the only acting force is often times we are put into a state of inaction thereby stymieing us from solving the problem or ending the terrors at hand.  THAT’S the infuriating part here…that’s the part that makes you want to scream WHY DIDN’T YOU BELIEVE….WHY DIDN’T YOU LISTEN…WHY WHY WHY?!  There…I’ve said my piece.  Moving on… 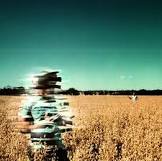 Lex is Evan’s best friend and if he had his way, potentially more…but even she does not get off scot-free.  Her past is tinged with sadness deeper than the Atlantic and wider than the river …again through no fault of her own.  As hard as it would be to read her story, at the same time I can’t help but wonder what it would be like to get to know her character better.  The glimpses we see of her with Evan and through Evan display a spunky girl with a mind of her own that walks to her own beat…despite all she’s seen.  She’s strong as she seems but even the hardiest flower has its weak points and she is no different.  Thank goodness for friends because just as Evan needs her, she depends on him.  It’s a good give and take relationship that’s sweet and nourishing to both souls in all the right ways; something the lives in this story truly need.  That being said, each character contributes something to this work from the bully who isn’t (or maybe is still) to the authority figures that miss the mark…but try to forget them; you’ll be hard pressed.

In summary, it’s an exercise in creativity the really shows how when the right idea meets the right mind, amazing things can happen.  This story invites you into the lives of a few, reaches out to many and shows us that even in the darkest of abyss’ there is light …and no, it’s not a train.  There is something to be learned from every encounter both good and not, if only we will open our hearts and minds to the possibility.  Sometimes what might be uncovered is beautiful, a Rembrandt amongst idle hands sketches; other times it’s a backyard special masquerading as a Picasso…but there are brush strokes of truth in each and they are equally important.  The vivid images created here are startling, sad, moving and many more emotions in-between but the overall effect is a masterpiece. Recommended read for older teens through adults due to content…it’s not explicit however the issues and ideas dealt with are not something I’d want a younger reader exposed to; life is hard enough without introducing wee little ones to the darkness that can reside in the human soul.

ARC for review courtesy of Leyane at FSB Associates.  (THANKS!)  For more information on this title as well as their upcoming promotions, be sure to visit their official website or sign up for their newsletter.  To check out more of the titles out now and coming soon from Merit Press, a division of F+W Media, Inc, be sure to visit them online.  Seeking more about the mind behind the work?  Author Steven Parlato is reachable online via his website and Facebook page.

Great review! This sounds like a tough topic that was well handled by the author. Might be a little too dark for me, but well done!

This book sounds intriguing. I really enjoyed your review and think this is a book that will make me think! I love the cover!
~Jess

Sounds intense. A lot of people end up having to deal with suicidal relatives, whether the relatives succeed in their quest or not. It's hard when the suicidal one is a parent - makes you wonder why they can't simply be happy enough to live for their own kids...like a special insecurity just for children or young adults. I had to deal with a parent who was always on the verge...it wasn't until I was an adult that I realized no matter what I did, I wasn't responsible for the parent's will to live, happiness or sadness. It just WAS. Nothing a child can do. A very special hell.

I usually stay away from stories when i know it's about suicide, but I find myself a little curious about this one.

Thanks for your insightful words. :)