BLOG TOUR: Her One and Only by Becky Wade

Here's hoping that you and yours had a chance to spend some quality time with dear old Mom yesterday...I know I did and Mom is now enjoying her new Litograph tote bag.  (^-^)  As for me, the Dell saga continues (*grr*) and today's post is being typed on...not my laptop...but it gets the job done so thanks to other parties for the loan.  *ahem*  Moving forward...

Today, we're playing host to a TLC Book Tour starring a Christian Fiction title that will also find itself welcome in both the Women's Fiction and light Contemporary Romance categories.  The story itself aims to break stereotypes from the start and will have you hanging on to the very end to see just how things are going to turn out...but that doesn't mean I didn't hit a hiccup or two along the way (more on that in a moment).  Without further ado, hut one...hut two...today's book of choice is... 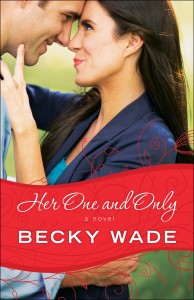 Her One and Only
by
Becky Wade
Bethany House

About the book...
Gray Fowler, star NFL tight end, is being pursued by a stalker, so his team hires a protection agency to keep Gray under the watch of a bodyguard at all times. When Gray meets Dru Porter, an agent assigned to him, he’s indignant. How can an attractive young female half his size possibly protect him?

But Dru’s a former Marine, an expert markswoman, and a black belt. She’s also ferociously determined to uncover the identity of Gray’s stalker. And she’s just as determined to avoid any kind of romantic attachment between herself and the rugged football player with the mysterious past. But the closer they get to finding the stalker, the closer they grow to each other. As the danger rises, can Dru and Gray entrust their hearts–and their lives–to one another?

Right from the start, we know we're in for a bumpy ride leading up to an adrenaline fueled scene...we have to wait almost 400 pages to get to.  *-*  Talk about truly giving yourself to a book!  Seriously though, the glimpse into the future at book's start is enough to capture your attention, but the road to getting there wasn't always smooth.

I appreciated the stereotypes the author chose to bust through, placing our leading lady in what is typically seen as a "man's role", having the big burly football player be the one needing protection (for the most part), and making it okay to like flowers and attention but not crave it every moment of the day.  Dru is a product of her environment as she grew up the youngest (by at least a decade) in a household with THREE older brothers.  Yep, THREE.  She was the "surprise" but as beloved as the rest, yet despite that understanding, always strove to keep up with the boys which apparently led to quite a few sticky situations.  Time passed, she found what she believed to be her calling and after a particularly gruesome end to her last job, she made peace with the big guy upstairs.  Her second chance granted, she was determined not to waste it...and that means focusing on her job, her life, and anything but the temptation that is her latest assignment.

That assignment goes by the name of Gray Fowler.  He is legend in his own right with the bumps, bruises, and scars (physically and emotionally) to prove it.  At this stage in his life, he's use to getting what he wants but isn't spoiled about it.  No fits will be thrown if it doesn't happen, but moments of surprise....you bet.  One of those surprises has been in the form of mailed threats that have escalated in frequency and intensity over the past year; the other would be the FEMALE executive protection agent assigned to him.  He's not above having a bodyguard (though he still feels it's overkill), but a female whom he dwarfs in size and intimidation powers?  Yeah, he's not loving life right now...but the challenge before him, he just might survive.  You see, Gray is not immune to Dru's powers either and whether intentional or not, he's falling fast...a victim of his own game.  With a potential killer on the lose, getting more and more brazen with his/her attempts, can their sparks turn into a flame?  Or will they be snuffed out by her iron will and his lost ways?  One things for certain, they will both discover things they never knew they needed and can no longer live without.

As I said, Dru was definitely not your typical bodyguard nor Gray the usual target.  The combo of the two make for some interesting situations and it was great to see them play off each other.  Now, before you jump to conclusions, this is a completely clean read...sparks are the most things amount to if/when they happen, so if you're opposed to any more even a scant bit, you're in your zone here.  Story wise, I was interested but felt that it was drawn out a bit.  The time span we're covering is a mere three months, but it feels more like a year.   I think it may have been the additional story line running in the background about Dru's family that stretched things a bit; something which if fleshed out could have been its own book and yet as it was seemed like an afterthought tacked on.  Just a thought.  Another issue of sorts that cropped up for me was in regards to the faith aspect of the story. 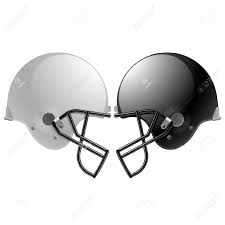 I've read Christian Fiction before and been fortunate to run the lines of the non-preachy reads.  There are moments of faith, some beliefs discussed or alluded to, but for the most part the story held the majority of the life within itself.  Here, it didn't cross that imagined line per se but it did get into a particular belief that I don't necessarily agree with, and to a point that it wasn't as easy to bypass and move beyond.  Even the moment when Meg is going through something so rough and terrible that you'd think she'd be lost to the throes of what's happening, there's this (to me) unusual discussion that offers her comfort when all seems lost.  I understand where she's coming from but not the timing in which it occurred.  Again, could simply be me, but there you have it.

In the end, I didn't regret my time between the pages and the ending is definitely nothing to sneeze at (OMG!  Seriously, gasp-inducing!).  As one of several books in this particular series, there is the option of catching up with Dru's siblings before or after this installment, but it can definitely be read as a standalone.  If you can commit to the journey, I highly suggest you give it a go....after all, sometimes the richest rewards are obtained from the most unexpected sources. 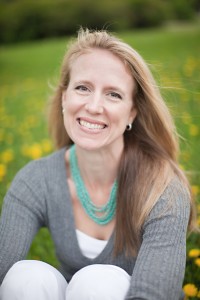 Becky Wade is a native of California who attended Baylor University, met and married a Texan, and moved to Dallas. She published historical romances for the general market, took time off to raise her children, then felt God nudging her to pursue contemporary Christian fiction. Becky is a Carol Award winner and a finalist for both a RITA and an INSPY Award.

Special thanks to Lisa at TLC Book Tours for the copy for review and chance to bring this promotion to you.  (THANKS!)  For more information on this title, the author, THE TOUR, the publisher, or those promotions on the horizon, feel free to click through the links provided above.  This title is available now via Bethany House Publishers, so be on the lookout for it on a bookstore shelf or virtual retailer of your choosing.

Not an book that appeals to me per se BUT I am always fascinated by characters which challenge the stereotypes and Dru certainly sounds as if she does this.

I like the idea of a guy with a much softer side and a girl with a much tougher side - definitely not the norm in fiction!