Hi guys and gals!
Welcome back to the site that loves nothing more than to curl up with a good book and read away the afternoon (and knows YOU do too!), Satisfaction for Insatiable Readers.

Today, we're playing host to a Sterling Children's Books blog tour starring a recently released title from author Kristina Springer.  It's a Children's Fiction title that has appeal for tweens, teens, and beyond as it takes us back to the hallowed halls of Middle School with paunch, panache, pizzaz, and a healthy dose of reality.  Ready or not, let's check out today's book of choice and blog tour guest... 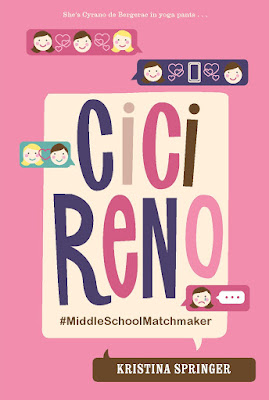 When all the kids in school need advice, Cici Reno is the one they trust. She’s cool, she’s funny, AND she’s enlightened (thanks to yoga classes at her mom’s studio). So when her pretty best friend Aggie is too shy to speak to the boy she’s crushing on, Cici goes online and does the talking for her. The only problem is, no matter how hard she tries to quash her feelings, Cici really likes him herself. What’s a girl to do?

Find Cici Reno #MiddleSchoolMatchmaker at any of these outlets:
B&N | Amazon | Indiebound

Oh come on, you remember your first crush on a boy after a summer away, best friends that show up a bit "different" than they were on the last day of school, and all the growing pains along the way.  You loathe it then but love it now and in this kick off book to the Yoga Girls series, you'll find yourself among good company.

CiCi is just trying to find her way, in life and in school.  As the fall semester is about to begin, she's thinking things are going to rock like striped socks with a plaid skirt...only to realize it's gonna be a much MUCH harder.  *sigh*  Those were the days when dealing with a crush we wouldn't acknowledge we had on a boy our friend called dibs on first were the BIGGEST issues in life.  Grant it, CiCi would be arguing wholeheartedly right now if she was here that of course it was the end of the earth and how could I possibly think she had a crush on her BFFs crush.  My answer...because CiCi, I've read your story and it doesn't differ than that of many girls out there now, then, and still to come.

In this case, social media becomes a girl's best friend (hence the hashtag title of the book) or rather her bestie's BEST way of getting to know her crush before ACTUALLY getting to know him face-to-face.  Only problem...she's tongue tied even online.  Good thing CiCi has the gift of gab and it certainly doesn't hurt that Drew is such a likable guy, despite his inclination to hang with her brother, Luke.  Conversations are had, feelings are uncovered, and things start to get a little harder than at first imagined.  CiCi is an upstanding young lady and loyal best friend.  She'd never do anything to jeopardize her friend's happiness...including own up to what's really going on in her heart of heart's. It comes down to the ultimate question of which is more important...your crush or your friend?  CiCi has a good head on her shoulders and plenty of good advice, but she'll have to listen to her heart to make the right choice for herself.

The author does a great job of taking you back to Middle School days gone by.  You can easily forget about the bigger world issues going on in your life and focus on CiCi's BIG decision with your whole heart.  The loyalty she has for her friend is genuine and touching.  We should all hope to have a friend that true in our lives.  As she was getting closer to Drew, all in an effort to score info for her bestie of course, we saw her transform in her own eyes from "Aggie's friend" to the CiCi Reno.  Though she's never truly suffered from a lack of confidence (props to her for standing up for Aggie and her unwanted attention), she did when it came to boys noticing her as potential for anything other than a friend.  It was wonderful to see her step out from behind the screen as herself, and discover what possibilities were really out there for her.

Overall, a great start to what sounds like a series with potential.  I for one would be curious to see what's in store next for our Yoga Girls as well as for the chance to try out a few more yoga poses without any prying eyes.  Hey, Downward Dog is not a position I want to be seen in public in, okay?  ^-^  Recommended read for Middle Grade fans and beyond.

Now, this being a blog tour and all, I had the opportunity to share another piece of the puzzle with you.  A special guest post from the author herself!  Ladies and gents, please give a warm SFIR welcome to author Kristina Springer! 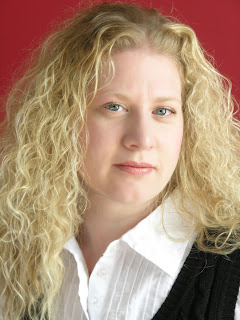 I write fun fiction books for tweens and teens and my newest middle grade book, Cici Reno #MiddleSchoolMatchMaker, stars a yoga-loving almost thirteen-year old who, when she’s not in school, can be found hanging out at her mom’s yoga studio, Peony Lane.
Middle school is a test, but Cici Reno has all the answers. She's the go-to girl for advice. She's cool, she's funny, and she's enlightened (thanks to yoga classes at her mom's studio). So when her pretty BFF, Aggie, is too shy to speak to the boy she's crushing on, Cici goes online and does the talking for her. The only problem is, Cici starts to fall for the guy herself! For the first time in her life. she doesn't have a clue.
Inspiration for my writing can come from anywhere: a memory from my own tween years, something my kids did, a conversation with a friend, etc. But often for me, the initial spark of a book idea comes from a setting and asking the question, “What if…?”.
For example, in my first young adult novel, The Espressologist, I was sitting in a Starbucks with my husband having drinks when I thought, what if there was a barista who could match people up romantically based on their favorite coffee drinks?
In Just Your Average Princess I was at the huge Johanson Pumpkin Farm in Bolingbrook, IL with my family, eating cider donuts, enjoying the rides, petting the animals, and picking out pumpkins, and I thought to myself, what if you spent your whole life growing up on a farm like this?
I was doing my weekly grocery shopping when the idea for my short story, Cart Princess, came to me. I was at the checkout when I looked at the bagger and thought, what if a bagger fell for a guy in produce but was mob-like warned that there was a set dating hierarchy in place in the store that no one could cross?
With Cici Reno #MiddleSchoolMatchMaker, it all began one day in yoga class. We had a new teacher and she was really cool and laid back. I remember thinking to myself, I bet her kids are really chill too. Then it hit me, what if there was this cool, enlightened, yoga-enthusiast kid who spent a lot of time at her mom’s awesome yoga studio? After I worked out the setting and the kind of person Cici was, I added in the Cyrano de Bergerac angle with a modern twist. 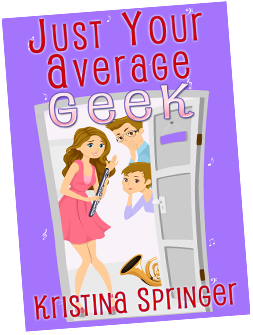 Kristina Springer is the bestselling middle grade and young adult author of The Espressologist, My Fake Boyfriend is Better Than Yours, the Just Your Average line of books (Just Your Average Princess, Just Your Average Geek, and Just Your Average Celebrity), and the forthcoming Cici Reno #MiddleSchoolMatchmaker (Sterling Children's/April 2016). She has a Masters in Writing from DePaul University and resides in a suburb of Chicago with her husband and children.

Special thanks to Ardi at Sterling Publishing Co., Inc for the ARC for review and to the author for sharing a bit about herself and her series. (THANKS!)  For more information on this title, the series to come, the author, or the publisher, feel free to click through the links provided above.  This title is available now via Sterling Children's Books, so be on the lookout for it on a bookstore shelf or virtual retailer of your choosing.

Intrigued by the social media element of this book, it also appeals to me given the age range of tweens, teens and beyond. Not something every author can do well, but it sounds as if Kristina has pulled it off.