BLOG TOUR: It's Okay to Laugh (Crying is Cool Too) by Nora McInerny Purmont

Today, we're playing host to a TLC Book Tours promotion starring an unusual read to say the least.  How so, you ask?  Well, it's a Memoir for starters, which is of course not our every day fare, and secondly, the voice of the author is probably one of the most unique, most honest ones that I've read thus far.  Ladies and gents, please join me in welcoming today's blog tour guest and book of choice... 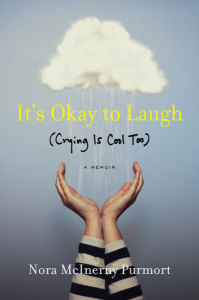 It's Okay to Laugh (Crying is Cool Too)

comedy = tragedy + time/rosé
Twenty-seven-year-old Nora McInerny Purmort bounced from boyfriend to dopey “boyfriend” until she met Aaron—a charismatic art director and comic-book nerd who once made Nora laugh so hard she pulled a muscle. When Aaron was diagnosed with a rare form of brain cancer, they refused to let it limit their love. They got engaged on Aaron’s hospital bed and had a baby boy while he was on chemo. In the period that followed, Nora and Aaron packed fifty years of marriage into the three they got, spending their time on what really matters: Buffy the Vampire Slayer, each other, and Beyoncé. A few months later, Aaron died in Nora’s arms. The obituary they wrote during Aaron’s hospice care revealing his true identity as Spider-Man touched the nation. With It’s Okay to Laugh, Nora puts a young, fresh twist on the subjects of mortality and resilience. What does it actually mean to live your “one wild and precious life” to the fullest? How can a joyful marriage contain more sickness than health? How do you keep going when life kicks you in the junk? In this deeply felt and deeply funny memoir, Nora gives her readers a true gift—permission to struggle, permission to laugh, permission to tell the truth and know that everything will be okay. It’s Okay to Laugh is a love letter to life, in all its messy glory; it reads like a conversation with a close friend, and leaves a trail of glitter in its wake.

It's a dose of reality you wouldn't wish on your best frenemy and yet so utterly real that you can't help but laugh at the absurdity of it all...oh yeah, and there's two deaths by cancer, and one miscarriage along the way.  Have I shocked you?  Are you reeling from the revelation of what the book centers around?  Well STOP RIGHT THERE.  This is a TRUE STORY from someone who has lived a life worth remembering and is still creating more moments rich in laughter, warmth, and heart.  She survived all she's been handed without so much as a backward glance of uncertainty...okay, that's a lie.  Let's cut to the chase much like our honest to goodness honest author does.

Nora McInerny Purmont is one heck of a woman.  She didn't set out to make millions from this work (though she might), nor to play the woe-is-me card some people tote around like a scarlet "A" (not that I'm blaming them, I'm just stating it to illustrate a point).  She did this to share her experience with others that may have been or may still be going through similar circumstances.  She did it to say HEY WORLD...I TOOK WHAT YOU GAVE ME AND DID NOT MELT DOWN (MUCH).  I SURVIVED.  She did it to remind us that our "one wild and precious life" is ours to live and there is no right or wrong way to go about it, so long as we actually DO go about the living of it.  The memories she shares take us from days of childhood innocence to drunken college nights, blind dates to finding "the one", unimaginable happiness to heart wrenching inevitability.  She learns that despite how invicible we feel, everyone's life has an expiration date...some more unfairly close than others...but that we shouldn't let it define how we live.  She sure as heck didn't and neither did her other half, Aaron.  Together they conquered the world, one day at a time and when the moment came to sever their ties here on earth, though they still hadn't had nearly enough days together, their love carried on.  It was so sweet (and tear inducing) how their son would say how his dad was in their hearts.

In the end, I learned a thing or two while experiencing life through another's eyes within these pages.  I now know that the proper Church response I grew up with ("AND ALSO WITH YOU") is no longer the accepted response, and that heading to New York on a dream and barely any cash may not be the smartest idea (even if it does seem romantic in some far offish way).  I can use the phrase "take the message to Garcia" on others and watch their eyebrow quirk in question as to what in the H-E-DOUBLE- HOCKEY-STICK I am talking about while keeping a knowing smile upon my lips.   I know that even in our darkest of times, there can be light and sharing those moments with others can not only be therapeutic for ourselves, but work to build a bridge between troubled souls.  In short, life IS wild, precious, and certainly the only one we're given, and making the most of it every day is entirely up to us.  Sometimes it will suck biscuits and still other times it will rock our socks off, but at the end of the day, it is still OURS and we owe it to ourselves to make it our own.

As the author herself says at the end of the Preface... 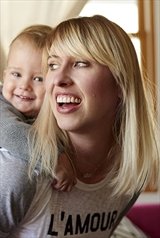 Nora McInerny Purmort was voted Most Humorous by the Annunciation Catholic School Class of 1998. It was mostly downhill after that, but she did get to spend three glorious years married to Aaron Joseph Purmort (aka Spider-Man). Her work has appeared on Cosmopolitan.com, Elle.com, and the Huffington Post, and in the Star Tribune. She lives in Minneapolis, Minnesota, with her son, Ralph. They really like it there. Find out more about Nora at her website, and connect with her on Facebook, Twitter, and Instagram.

Special thanks to the TLC Book Tours team for the review copy and chance to bring this tour to you.  (THANKS!)  For more information on this title, THE TOUR, the author, the publisher, or those promotions on the horizon, feel free to click through the links provided above.

It looks like this is a book I need in my life!

"Even in our darkest of times, there can be light..." THIS is the message I look for in just about every book I read, because this, to me, is one of the things life is all about. That all the pain and suffering is worth it, usually because of the connections we make.