The Riverman by Aaron Starmer

Greetings and salutations.
You’ve reached the site that may be busy, may be unpredictable, may keep you guessing as to just what genre you’ll find next….but always keeps it BOOKISH, Satisfaction for Insatiable Readers.

Today, we’re stepping into the land of Children’s Literature with a recent release that’s curious indeed.  I choose the word curious because honestly, even after some pondering, I’m not quite certain what to make of it.  I mean, I was drawn in much like the children were into Aquavania but by book’s end, I’m not quite certain what was real and what was given greater detail and life through imagination.  Confused?  Here, let me try to untie some of those knots of uncertainty.  Today’s book of choice is… 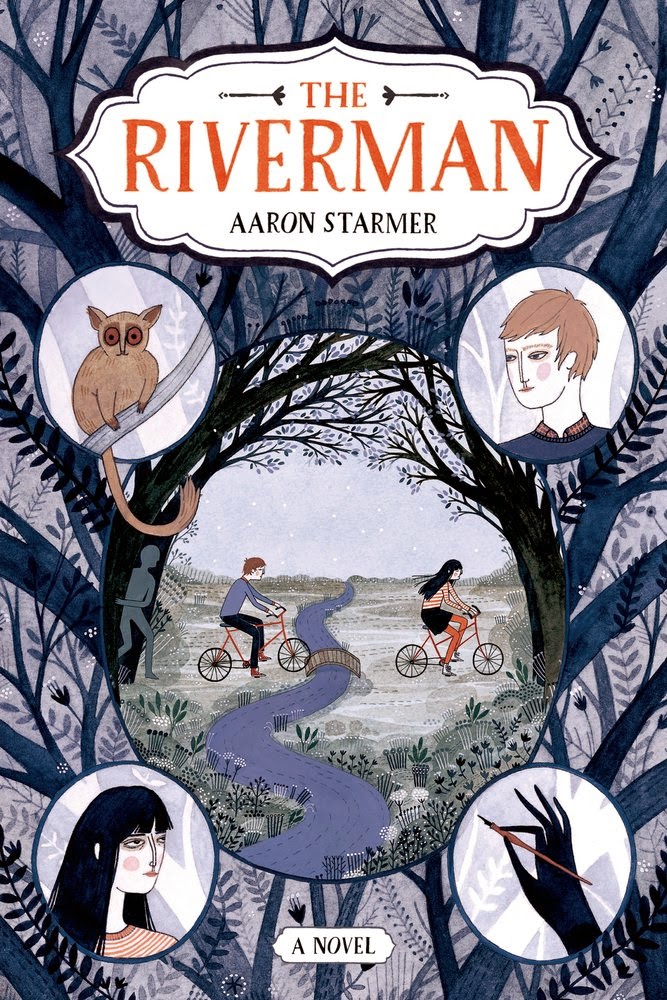 From the back cover…
If he takes your story, he’ll steal your soul.
Alistair Cleary is the kid everyone trusts, the kid who wraps his fingers around secrets and never lets them go.  Fiona Loomis is not the typical girl next door.  One day she shows up at Alistair’s house with a proposition:  she wants him to write her biography.  Fiona says that in her basement, there’s a portal that leads to a magical world where a creature called the Riverman is stealing the souls of children.  And Fiona’s soul could be next.  Alistair fears Fiona may be crazy.  But what if what she’s saying is true, her life could be at risk….

Uber creepy attention grabbing description, no?  Especially with it being a Kid’s Fiction title!  My word.  I mean as a lover of the written word myself, I couldn’t avoid adding this book to my “read” list.  The opening line alone, you know the part about taking your story AND your soul, is definitely shiver inducing.  Once you step into the story though, things become a bit muddled.  Let’s take a walk through the pages shall we? *locks arms with you…proceeds to stroll*

Alistair is an interesting lad.  He’s true blue to his core even if he isn’t exactly sure what his nougat-y center actually contains at his youthful age.  Fiona Loomis though seems to be settled on something of substance…and I tend to agree with her even if he is misguided at time.  Taking his previously seen writing talents into account, she chooses him to write her memoirs, her memories, her life story if you will….before it’s too late.  How can it be too late for a 12/13 year old?  Oh and why did I not simply state her actual age as opposed to putting the slash in there?  All good questions, and all answers point to Aquavania….the land where all thoughts and dreams are realized, taking on solid form and a life of their own.  You see, a day there is like the blink of an eye here; a year, probably equals about a few minutes. The point being the more time spent there, the less you seem to age here and yet you ARE older.  Aged by experiences, knowledge gained, lessons learned, just like the modern world, just without the physical changes to accompany them.  An interesting concept right?  Right.  Just like this whole other world bit… 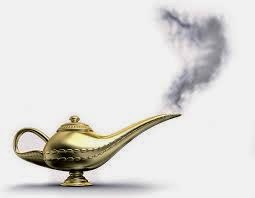 Aquavania…sounds like a lovely place to visit but with the likes of the Riverman running about, I’m not sure I’d want to stay.  Sorta like Aladdin’s genie….phenomenal cosmic powers, itty bitty living space; though you’ve the power to create your world, it still has it’s limitations and it’s (and YOUR) demise is easily met if the Riverman makes it into your borders.  Sounds easy enough, forbid him from entering….but he has WAYS of getting in.  Think Snow White and the apple that did her in for the time being…sneaky evil characters.  Only thing is, this isn’t a fairy tale….this is real life (well, fictional real life, but you understand my point).  Happily-ever-afters are hard to come by and often times fantastical tales are more than what they seem.  Case in point, Alistair’s very real concern for Fiona when he himself gets lost within her story.  He tries to listen with an open mind, an open heart, no judgment, but what can I say, he CARES.  Funny thing about caring….it can keep you out of trouble but also get you neck deep in it.  Anywho, anywho…

I’m rambling!  This is what happens when a story perplexes me.  Let me just sum things up so I don’t keep you any longer.  The author creates a world both real and make believe with equal value.  Knowing the difference between the two, or even if there is one, is hard to establish….in a good way.  The characters are hard to know but grow on you.  Guys like Alistair and Kyle are finding their way in the world, one just a bit more openly hardcore than the other; Charlie however is another story altogether.  He may be best friend’s with Alistair but he never really sat right with me.  Read it, you’ll see.  As far as Fiona goes, I love her name, I love her imagination, I love the fact that she’s not afraid of looking or sounding weird by someone else’s standards.  I like how she grows up right before our eyes even in the short time we know her….and I like how she looks beneath the surface of things to discover what’s truly there.  Overall though, the story still left me befuddled.  What happened at the end?  I’m not sure even now I can REALLY say.  I know there were events that came to a head.  I know there was a showdown of sorts and an outing of someone.  I even know that someone is perhaps fatally wounded (or worse still!)and yet, the why, how, and what are still muddy….but perhaps with another book on the horizon, that’s the point.  Always leave them wanting more is the catchy phrase heard round the world…maybe that’s the only thing to be sure of at this point and leave the rest for what may come.

ARC for review courtesy of Ksenia and Mary at MacMillan Children’s Publishing Group.  (THANKS!)  For more information on this title as well as their ever growing catalog, be sure to stop by their official site, friend them on Facebook, or follow along on Twitter.  This title was released just last month via Farrar Straus Giroux, so be on the look out for it on a bookstore shelf near you.  Recommended read for fans of Middle Grade adventures with mystery, and fantasy sandwiched together with reality.  Oh and for those readers who DO intend on embarking upon this particular journey, you may well be advised that there is a sequel on the horizon.  Will it answer my questions, unfuddle my mind, put me at ease, etcetera, etcetera?  Well, time will only tell now won’t it.  I mean another story, another set of characters, considering the events that play out here (not telling!), a new way of looking at the world we live in and that land of possibilities introduced here; one can only begin to imagine.

Great cover but this sounds like a scary and overly complex read that I'm guessing is strictly for older children and upwards.